Ex-CEO of Data Analytics Company Said His Jan. 6 ‘Indiscretion’ Was the ‘Single Worst Decision’ of His Life. He Just Pleaded Guilty. 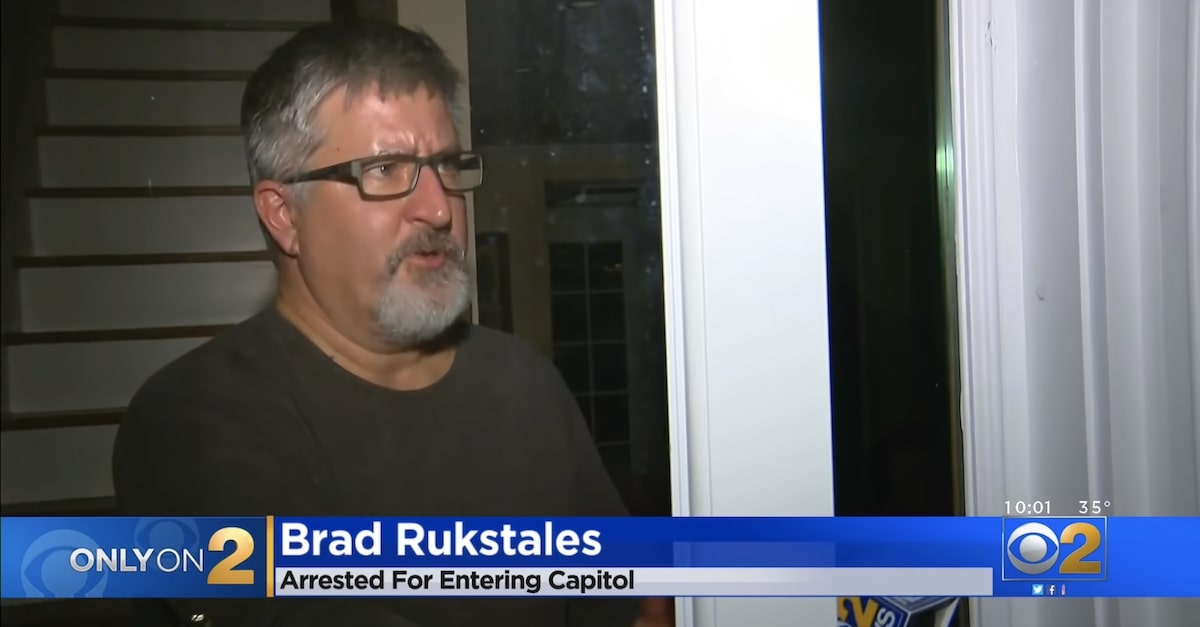 Nearly eight months after issuing a statement that his participation in the siege of the U.S. Capitol was the “single worst decision” of his life, the former CEO of an analytics company pleaded guilty on Tuesday. His admission to parading, demonstrating or picketing inside a Capitol building could carry a maximum six-month sentence.

Only a day after 53-year-old Bradley Rukstales entered the Capitol building, the now-former Cogensia CEO posted a lengthy statement on his Twitter account.

“In a moment of extremely poor judgment following the Jan. 6 rally in Washington, I followed hundreds of others through an open set of doors in the Capitol building to see what was taking place inside,” Rukstales claimed. “I was arrested for the first time in my life and charged with unlawful entry.”

Rukstales was fired from Cogensia on the day he was charged federally.

As described by Assistant U.S. Attorney Susan Lehr during a plea agreement hearing on Tuesday morning, Rukstales’s participation was less passive. Lehr noted that Rukstales traveled from Illinois to attend former President Donald Trump’s rally, which devolved into a riot. The prosecutor noted that the pro-Trump mob, including Rukstales, threw chairs. She added that the CEO threw a chair in the direction of the officers, but nobody was ever in danger of being hit. Rukstales emphasized that latter point.

“I was very careful when I was with the chair to make sure that nobody was within striking distance,” Rukstales told U.S. District Judge Carl J. Nichols, a Trump appointee.

A U.S. Capitol police officer affidavit filed in the case described the melee.

The officer described Rukstales as part of a group of six people he encountered on the upper level of the U.S. Capitol Visitors Center near the door to the House Atrium who refused orders to leave. All members of the sextet were arrested.

Rukstales denounced the violence of Jan. 6th in his statement.

“My decision to enter the Capitol was wrong, and I am deeply regretful to have done so,” he wrote in his statement. “Without qualification and as a peaceful and law-abiding citizen, I condemn the violence and destruction that took place in Washington.”

Offering “sincere apologies” for what he called his “indiscretion,” Rukstales added: “I deeply regret that my actions have brought embarrassment to my family, colleagues, friends and fellow countrymen.”

“It was the single worst decision of my life,” he wrote. “I have no excuse for my actions and wish that I could take them back.”

That was not his only public statement on the matter. Rukstales agreed to speak to CBS affiliate WBBM in Chicago, which taped him describing how the rally descended into “chaos.” The station captured his quiet suburban life in Inverness, an upscale village in Cook County, Illinois.

“i was in the wrong place at the wrong time,” he insisted.

Under the terms of his plea agreement, law enforcement can review any of Rukstales’s social media accounts.