Army Vet Who Tried to Open Doors from Inside the Capitol Rotunda on Jan. 6 Sentenced to Jail, Probation 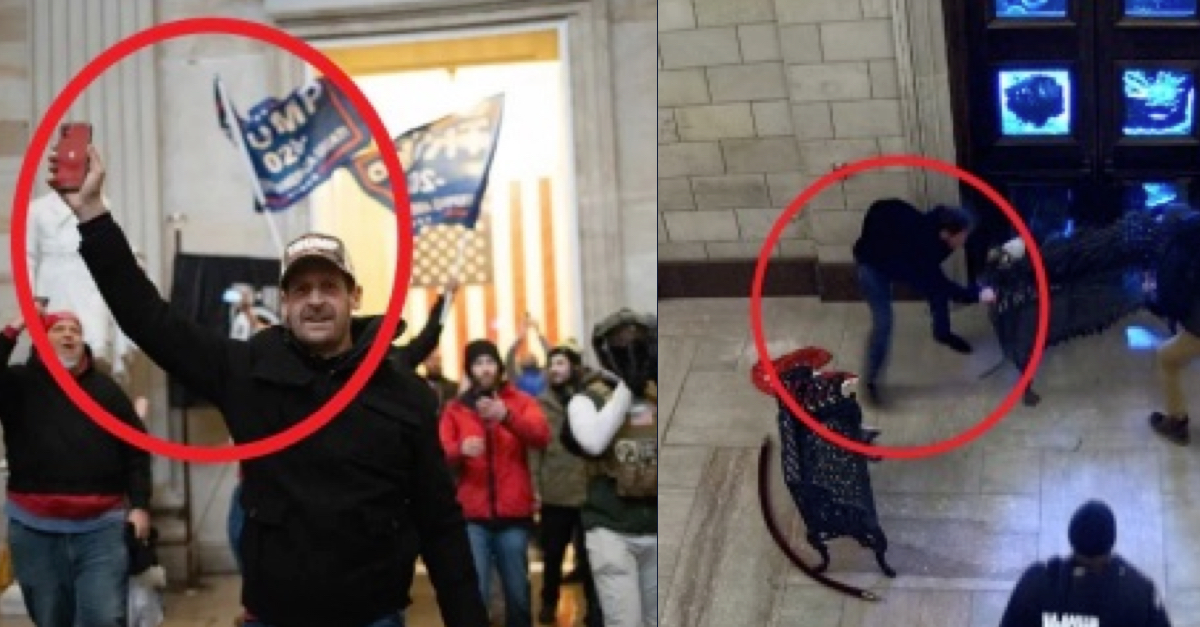 An Army veteran who moved benches away from doors inside the Capitol Rotunda in an effort to let violent rioters into the building on Jan. 6 has been sentenced to 90 days in prison.

Jeffrey Alexander Smith, 34, was relentless in his efforts to bypass the police and help the crowd of Donald Trump supporters break into the Capitol building in order to stop Congress from certifying Joe Biden‘s win in the 2020 presidential election, prosecutors say.

“Far from being a follower simply caught up in the crowd, Smith — a former Army sergeant quite literally led the charge to open the Rotunda doors from the inside to let in a violent mob clearly visible to him through the damaged door windows on the outside,” the government said in its sentencing memo.

Prosecutors also noted in the memo that Smith had been arrested for domestic violence for violating a protection order, one of multiple violations of the conditions of his pretrial release.

Smith, who served five years in the Army, is seen on surveillance video helping to move iron benches that were serving as barricades to the Rotunda doors. During his time at the Capitol he also yelled at police to “stand down” and told the officers that the crowd was “getting in there one way or another.”

“There is no way in hell I was going to drive 38 hours from San Diego and not walk right through the front of the capital [sic] building,” Smith wrote in a text message to an acquaintance.

He pleaded guilty in October to one count or parading, demonstrating, or picketing in the Capitol building, a misdemeanor punishable by up to six months in jail.

Senior U.S. District Judge Reggie Walton sentenced Smith to three months in jail and two years of probation on Tuesday, bringing closure to a hearing that had started on Feb. 22. At that time, Walton indicated he was inclined to sentence Smith to 90 days in jail and a term of probation, but asked the lawyers for additional briefing on the issue of split sentences.

In the interim, Senior U.S. District Judge Royce Lamberth, a Ronald Reagan appointee, issued a written opinion on the issue and ultimately concluded that split sentences are allowed in petty misdemeanor cases such as Smith’s and dozens of other Jan. 6 defendants who have pleaded guilty to the parading and picketing charge.

Lamberth’s ruling stands in contrast to that of U.S. District Judge Colleen Kollar-Kotelly, a Bill Clinton appointee who amended Jan. 6 defendant Jenny Spencer’s sentence of jail time and probation after Spencer challenged it.

“I do think that Judge Lamberth has made a more compelling argument for the various reasons he set forth, not only from standpoint of statutory construction analysis, but also is jut seems to me it just doesn’t make good sense to conclude that a split sentence in this context is not appropriate,” said Walton, a George W. Bush appointee.

Before Walton issued his sentence, he offered Smith the opportunity to speak on his own behalf.

Walton, while not unsympathetic to Smith, stood firm.

“It is unfortunate because fathers are important in the lives of children, and I appreciate that, but there has to be consequences for what people do. Especially something of this magnitude,” Walton said, later adding: “I don’t understand how somebody who served in our military would lower themselves to engage in this type of behavior.”

Walton said he wanted to send a clear message about the potential impact on the country as as result of the pro-Trump mob’s disruption of the peaceful transition of power.

“If one side’s not willing to accept the reality of an election, then we are really headed down a road where we’re going to see our democracy die,” Walton said. “I would hate to see that happen . . . I think America’s basically a good country. It’s done a lot of good things, and continues to do a lot of good things. I’m hopeful that will be the future of our country, not the road Jan. 6 would take us down, which would be total anarchy.”

Walton also ordered Smith to complete 200 hours of community service while on probation, at a rate of no less than four hours per week. Smith will also have to pay $500 in restitution toward the estimated $1.5 million in damage.