72-Year-Old Pennsylvania Man Who Struck Police with a Pole on Jan. 6 to Spend Years Behind Bars 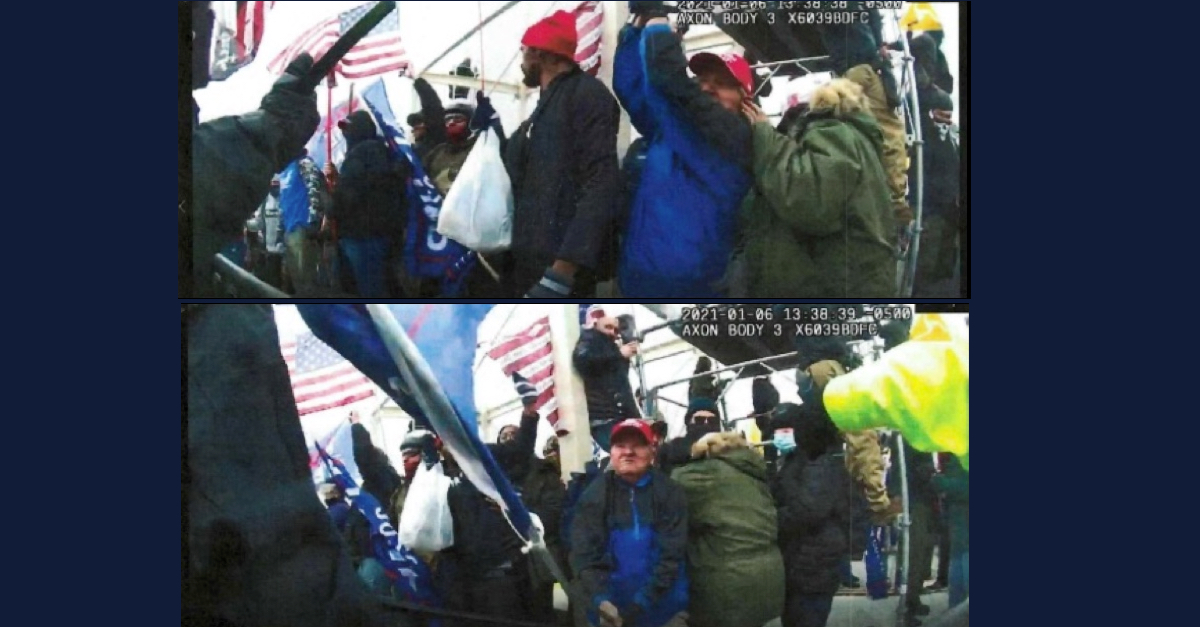 A Pennsylvania man who struck a police officer with a pole bearing a flag expressing support for Donald Trump during the melee at the U.S. Capitol on Jan. 6 has been sentenced to almost four years behind bars.

Howard Charles Richardson, 72, is seen on police body-worn camera footage using a pole to strike an officer repeatedly. According to prosecutors, Richardson passed by metal barriers and police officers trying to keep the crowd of Trump supporters away from the building as Congress began to certify President Joe Biden’s 2020 electoral win.

“At about 1:38 p.m., Richardson was standing several feet away from the police line at the West Terrace with the flagpole,” the DOJ said in a press release. “He raised it and forcefully swung it downward to strike an officer with the Metropolitan Police Department who was standing behind a metal barricade. Richardson then struck the officer two more times, using enough force to break the flagpole. Then, moments later, he joined other rioters in pushing a large metal sign into a line of law enforcement officers.”

Richardson, a Vietnam War veteran who was honorably discharged after four years of service, pleaded guilty in April to assaulting, resisting, or impeding police officers.

On Friday, U.S. District Judge Colleen Kollar-Kotelly sentenced Richardson to 46 months in prison  followed by three years of supervised release. He was also ordered to pay $2,000 in restitution toward the estimated $2.7 million in damage to the Capitol.

The sentence is exactly what prosecutors had requested. Richardson, through his lawyer Thomas Egan, had asked for a maximum sentence of 18 months in prison, which is what the federal probation office had recommended.

At sentencing, Kollar-Kotelly, a Bill Clinton appointee, focused in on Richardson’s shifting stories as to what happened that day, noting that the defendant’s reasons for why he struck the police officer had changed multiple times.

“Although the defendant ultimately admitted his criminal assault, he equivocated to start with, and there was a lot of back and forth with the Court” at his plea agreement hearing, Kollar-Kotelly said, adding that the colloquy is necessary to ensure that a defendant’s guilty plea is knowing and voluntary.

“In the FBI interview after the plea, he agreed he committed the assault, but he was trying to excuse his actions and lessen his culpability for another reason,” the judge continued, citing Richardson’s insistence that he struck the police officer only after the officer tried to strike him first with a baton — an assertion disproven by video evidence, the judge noted.

Kollar-Kotelly said that during sentencing, Richardson’s story changed yet again, and he was saying he struck the police officer with the pole because he had just been pepper-sprayed. Again, the judge noted, video evidence showed otherwise.

“I know I did,” Kollar-Kotelly continued, “and I think if they had been viewed [by probation] there might have been a different recommendation.”

The judge also noted that Richardson’s other run-ins with the law were concerning. He had been stopped by a police officer in October 2020 for driving on a suspended license, and initially told the officer that he wasn’t armed, although he was — despite having had his gun license revoked following a 2018 altercation in which he drew his gun.

He is also facing charges for allegedly tackling a man driving a motorcycle down Richardson’s street in September 2021 — a confrontation that ended with the driver requiring surgery.

In an effort to minimize his client’s time behind bars, Egan said that Richardson’s experience in pretrial detention has had a big enough impact to keep him on the straight and narrow going forward.

“He has made an affirmative choice that ‘this is not where I want to be, this is not any life that I want to live,'” Egan said, adopting the point of view of his client.

Kollar-Kotelly, however, noted that much of Richardson’s regret appears to be for the consequences to his own life, as opposed to remorse for having participated in a riot over the peaceful transition of presidential power.

“He’s indicated that he regrets what has happened,” the judge said. “To some degree it’s the consequences to him” and his business, the judge added. She later told Richardson that there were “unintended consequences for those close to you” as a result of his actions at the Capitol.

“It would be nice if you [and other people thinking of committing crimes] thought about their actions before you take them to realize there are consequences to what you do when you commit a criminal act,” Kollar-Kotelly said. “It may affect other people, as it has in this particular case.”

Kollar-Kotelly also commented on the fact that Richardson had served as as poll watcher in the 2020 presidential election.

“I was struck by your role as a poll watcher,” the judge said. “There are poll watchers in every community, every city, every county and every town. They’re volunteers. They’re generally passionate about their communities … [they are] the lifeblood, the very essence of what it means to live in a democratic society[.]”

“In this instance, he went from helping members of his community exercise their most fundamental right [and] helping democracy thrive to attacking democracy on Jan. 6,” Kollar-Kotelly later said.