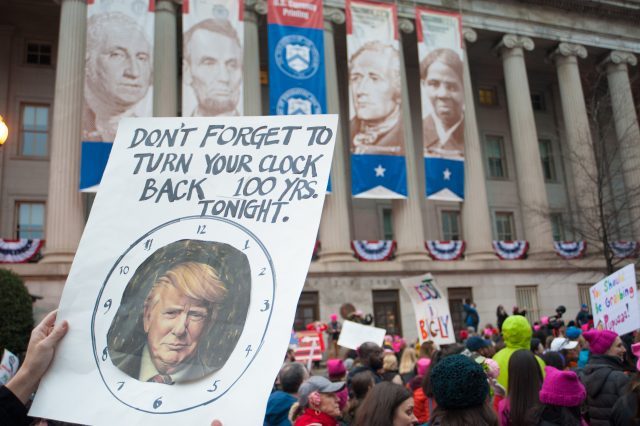 The president’s order was issued on Jan. 30 and required federal agencies to repeal two existing regulations for every new regulation proposed or issued. The order also required the cost of the new regulation to be fully offset through the repeals.

Trump had promised during his presidential run to place a moratorium on new federal regulations not compelled by Congress or public safety. Soon after his victory, he issued a video mapping out his first 100 days that included the 2-for-1 curb on government regulations.

The lawsuit was filed in the U.S. District Court for the District of Columbia. It underscores the difficulties of governing through executive action as opponents turn to the courts to block implementation, just as they did with Trump’s travel ban. Former President Barack Obama faced similar roadblocks when his administration sought to expand overtime pay and block millions of people from deportation.

The lawsuit contends that Trump’s order exceeds his constitutional authority and directs federal agencies to illegally repeal regulations needed to protect the health and safety of Americans and the environment.

The organizations filing the lawsuit are Public Citizen, a consumer advocacy group, the Communications Workers of America and the Natural Resources Defense Council.

The White House did not immediately respond to a request for comment. Republicans in Congress have been supportive of the president’s calls for reduced regulation and have moved to repeal several of the final regulations issued during Obama’s presidency affecting the environment, education and financial disclosure.