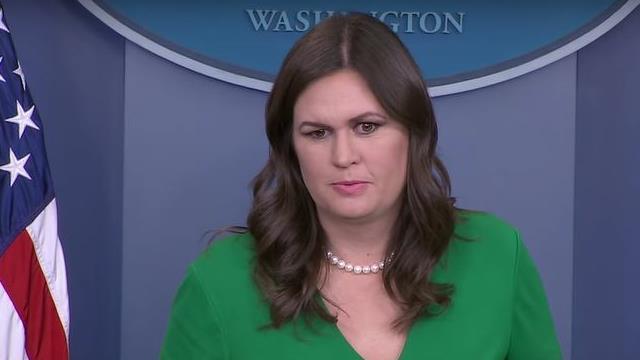 We continue to digest, as we do with heavy, well-cooked meals at fancy restaurants, the 312-page transcript made public this week by Sen. Judiciary Committee Ranking Member Diane Feinstein. The transcript is of a committee interview with Fusion GPS boss Glenn Simpson. Fusion GPS was the research firm reportedly hired first by Republicans, then by Democrats, to investigate then-candidate Donald Trump, though during the committee interview Simpson was coy about disclosing information about his clients. The firm’s reports on the purported ties to Russia of the president’s representatives and the president himself have been a political quagmire for the president ever since.

Four distinct times, the committee asked Simpson to directly respond to comments made about his firm by White House Press Secretary Sarah Huckabee Sanders. In doing so, he more or less accused Sanders of being a liar. The following exchange occurred between Heather Sawyer, chief oversight counsel for Sen. Feinstein, and Simpson:

A:  I would not agree with that description. I was a journalist for most of my adult life and a professional at not taking sides, and I’m happy and proud to say I have lots of Republican clients and friends and I have lots of Democratic clients and friends. I’ve lived in this city for 30 years or so and I know a lot of people on both sides and we have a long proud history of not being partisan. And the same is true for my colleagues. We intentionally don’t hire people who have strong partisan affiliations. We prefer journalists who don’t see things through ideological prisms and ideological prisms are not helpful for doing research.

Simpson made an almost identical answer to that one hours later during the interview.

Sawyer also asked Simpson about claims by Sanders that he was taking money from the Russian government:

Q:  So in an August 1, 2017 news briefing White House Press Secretary Sarah Huckabee Sanders said ‘The Democrat linked firm Fusion GPS actually took money from the Russian government while it created the phoney dossier that’s been the basis for all of the Russia scandal fake news.’ What is your response to that statement?

Q:  And what in particular is not true about it?

A:  Most importantly the allegation that we were working for the Russian government then or ever is simply not true. I don’t know what to say. It’s political rhetoric to call the dossier phoney. The memos are field reports of real interviews that Chris [Steele]’s network conducted and there’s nothing phoney about it. We can argue about what’s prudent and what’s not, but it’s not a fabrication.

Q:  And I think you’ve already answered you contend that you were not taking money from the Russian government and that was in relation to the litigation work you had done with [law firm] Baker Hostetler, correct?

A. Yes. They are a well-regarded law firm that has obligations to determine the sources of funds when they take a client and, to my knowledge, they did so and the money was not coming from the Russian government.

Simpson was talking about work his firm did on the so-called Prevezon litigation. In that case, the real estate company Prevezon Holdings, Ltd., based on Cyprus, was accused by federal prosecutors of laundering some of the money from an alleged $230 million Russian tax scam into and through the New York City real estate market. The case settled before trial in 2017. Both prosecutors and Prevezon claimed they won. At the time, Prevezon said the government’s case was based not upon independent investigation, but “exclusively on the claims of investor William Browder, a convicted tax evader who CBS News reported in 2012 renounced his U.S. citizenship to avoid paying U.S. taxes. Prevezon agreed to settle the lawsuit without admitting any guilt for less than three percent of the amount initially sought by the U.S. Government to avoid the exorbitant costs of additional litigation.” Prosecutors have said the settlement had nothing to do with Trump’s changes to the Justice Department around the same time, but the timing has caused plenty of speculation.

Prevezon hired Baker Hostetler to defend the company. Baker Hostetler hired Fusion GPS to work on the case. Russian attorney Natalia Veselnitskay — the same woman who reportedly met with Donald Trump, Jr. and Ivanka Trump — was also connected to the Prevezon case, Simpson said. But as to whether his firm or its associates wound up with proceeds from the Russian government, the answer was “no”:

Q. Did, to the best of your knowledge, Mr. Steele take money in any way, shape, or form that could be attributed to the Russian government for the work that he did on the memos as part of the opposition research on Candidate Trump?

Jason Foster, who was there on behalf of Republican Charles Grassley, revisited Simpson’s denial of the Huckabee Sanders claim that his firm was somehow linked to the Democrats. Foster noted that Fusion GPS did opposition research on Mitt Romney in 2012, then asked whether Fusion GPS did opposition research on Barack Obama. An attorney for Simpson said the question was outside the agreed-upon scope of the interview, but Fusion GPS, which opened in 2011, wasn’t even in business during Obama’s first presidential campaign:

A:  I did investigate Senator Obama’s campaign in 2008 when I was working for the Wall Street Journal and wrote an article that caused his campaign chair to resign. The record is replete — or the public report of my work is replete with examples of investigations I’ve done of Democrats that resulted in them losing their elections and being prosecuted.