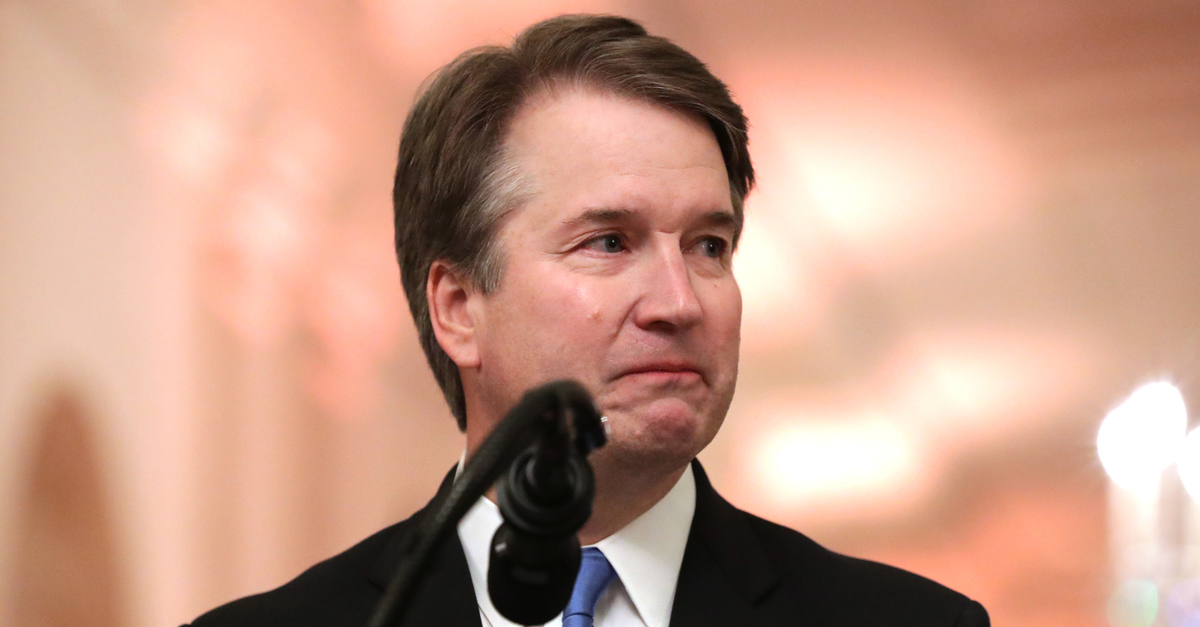 U.S. Supreme Court Associate Justice Brett Kavanaugh speaks at his ceremonial swearing in in the East Room of the White House October 08, 2018 in Washington, D.C.

Vermont wants the U.S. Supreme Court to correct the record after Justice Brett Kavanaugh made a false claim about the state’s voting procedures in an error-riddled concurrence earlier this week.

“I write in the hope of correcting the record with respect to an Oct. 26 opinion,” Vermont Secretary of State Jim Condos wrote in a one-page letter to the Supreme Court Clerk Scott Harris on Wednesday.

“On page 5 of his opinion, Justice Kavanaugh stated, ‘Vermont, by contrast, ha[s] decided not to make changes to their ordinary election rules, including to the election-day deadline for receipt of absentee ballots,'” the Green Mountain state official noted.

But, as it turns out, Kavanaugh’s statement wasn’t actually true.

First, beginning on Sept. 18, Vermont mailed every active registered voter a ballot and a prepaid return envelope. Second, given that more Vermonters are voting early and by mail than in a typical election year, I authorized Local Election Officials to begin processing such ballots confidentially and with strict security during the 30 days preceding the election in order facilitate timely results.

“These two actions factored significantly into our decision to hold to existing law requiring the election day receipt of mailed ballots rather than extending returns beyond election day based on postmark,” Condos continued.

This rebuke came at the expense of Democrats who supported a more lenient deadline and a federal district court in Wisconsin that created the three-day grace period in order to accommodate voters impacted by the still-raging coronavirus (COVID-19) pandemic.

Kavanaugh incorrectly looked to Vermont in order to bolster his argument that some states decided not to do anything about COVID-19 viz. their election systems  because of something to do with federalism.

“The variation in state responses reflects our constitutional system of federalism,” Kavanaugh wrote. “Different state legislatures may make different choices. Assessing the complicated tradeoffs involved in changing or retaining election deadlines, or other election rules, in light of public health conditions in a particular state is primarily the responsibility of state legislatures and falls outside the competence of federal courts.”

According to Vermont, Kavanaugh was simply wrong on the facts.

“Since the state of Wisconsin neither changed its ordinary election rules this year to mail each of its active registered voters a ballot nor authorized its Local Election Officials to process ballots early, Vermont is not an accurate comparison for the assertion Justice Kavanaugh has made,” Condos noted later on in the letter. “I respectfully ask that the record is corrected to reflect that.”

As Law&Crime previously reported, Kavanaugh’s concurrence had already been widely criticized because he cherry-picked a quote from a law review article that actually contradicted his own argument–and for various other reasons as well.

Vermont’s formal request for the equivalent of a retraction and correction piles on to Kavanaugh’s already bumpy week.

“We have formally requested that [the Supreme Court] correct the erroneous claim by Justice Kavanaugh that [Vermont] has not changed voting procedures for the [2020 elections] due to #COVID19,” the secretary of state’s office noted in a viral tweet announcing the request. “When it comes to issuing decisions on the voting rights of American citizens, facts matter.”

Law&Crime reached out to the high court’s public information office for comment on the Condos request but no response was forthcoming at the time of publication.