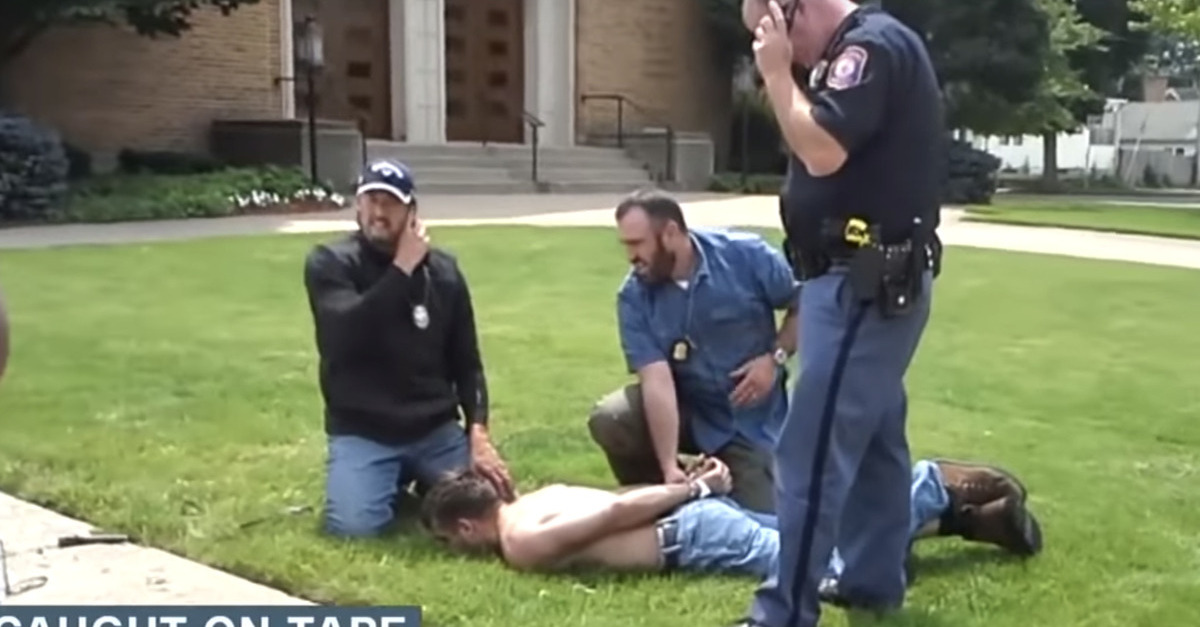 The Supreme Court of the United States granted certiorari Monday in Brownback v. King. The legal issue at hand is a kind of state-or-federal question that creates what many would perceive as a legal loophole. The non-legalese question, though, can be summed up as follows: “What happens when a task-force officer makes a mistake and beats up an innocent person?”

Here’s how this whole controversy arose.

James King, a 23-year-old Michigan college student, was walking home one night in 2014. Two undercover law enforcement officers—Grand Rapids Police Detective Todd Allen, and FBI Special agent Douglas Brownback–mistook King for a wanted burglary suspect. King (thinking he was being mugged) did not produce identification when asked. The officers closed in on him and King tried to run – all while crying out for help. The officers then put King into a chokehold. King, trying to escape, bit one of the officers. Finally, Allen and Brownback beat King – and the violent beating was captured on video by some passersby.

King was later prosecuted and acquitted for resisting arrest and assaulting the officers. Attempting to seek redress for the officers’ extreme use of force against him, King sued. The problem, he soon learned, was that Allen and Brownback weren’t just any cops – they were members of a “joint task force.” That distinction made all the difference with respect to King’s lawsuit.

Normally, if a person is suing state or local law-enforcement officers for excessive use of force, the go-to statute for such civil-rights violations is Section 1983 of the U.S. Code. 1983 lawsuits are, by no means, easy to win, but the statute was created for precisely the scenario of an innocent person victimized at the hands of government officials. Many states also have their own version of 1983, which allow plaintiffs to sue local cops for violating state-guaranteed constitutional rights.

Alternatively, if we’re talking about federal LEOs, the right kind of case to bring is called a “Bivens claim” — an “implied” claim that gets its name from Bivens v. Six Unknown Named Agents. Again, such cases are tough to win, and damages can be limited, but a situation like King’s beating is essentially a textbook Bivens claim. In addition to civil rights claims, victims of federal police violence can sometimes also sue the officer’s federal agency in tort under the Federal Tort Claims Act (FTCA).

Because the incident in question involved both federal and state LEOs, James King decided to file lawsuits using all three options – 1983, Bivens, and FTCA.

From a legal standpoint, the case went completely haywire. The federal court dismissed all of King’s claims. 1983 wouldn’t work, because the task force was “a federal agency.” FTCA wouldn’t work, because Michigan law makes law enforcement agencies immune, and that immunity extends to both Allen and Brownback. In other words, the task force gets all of the benefits of being considered “federal” and all of the benefits of being “local.” Regardless of how wrongly King may have been treated, his case fails because it doesn’t fit squarely within the area defined by either law.

King dropped the FTCA claim, but appealed the other rulings to the U.S. Court of Appeals for the 6th Circuit.  The Circuit Court upheld the lower court’s ruling that officer Allen was a “federal agent,” and therefore, King can only proceed with a Bivens claim. King might have one just that and proceeded with litigating the Bivens claim, but the Department of Justice appealed the 6th Circuit’s ruling to the Supreme Court; the government’s hope is that that the high court will reverse and throw out King’s one and only chance of recovery.

Technically, the question presented to the justices is whether a lower court ruling on the FTCA precludes a plaintiff bringing a Bivens claim. Some, though, have characterized the state-federal interplay here as a “shell game” that has the result of allowing task force members to violate individuals’ constitutional rights without any legal accountability.

The Supreme Court just agreed to hear this case, and it’s very likely the conservative majority will throw out the victim’s Bivens claim and make it nearly impossible to sue state-federal task forces that brutalize or kill innocent people. https://t.co/x92TIfthGA

Court-watchers know that conservative justices have long wished to constrain the Bivens rule. As a case-created rule (as opposed to a federal statute), the court has been loathe to expand the territory covered by the rule — even though that may mean granting federal LEOs what some have deemed, “a license to kill.”