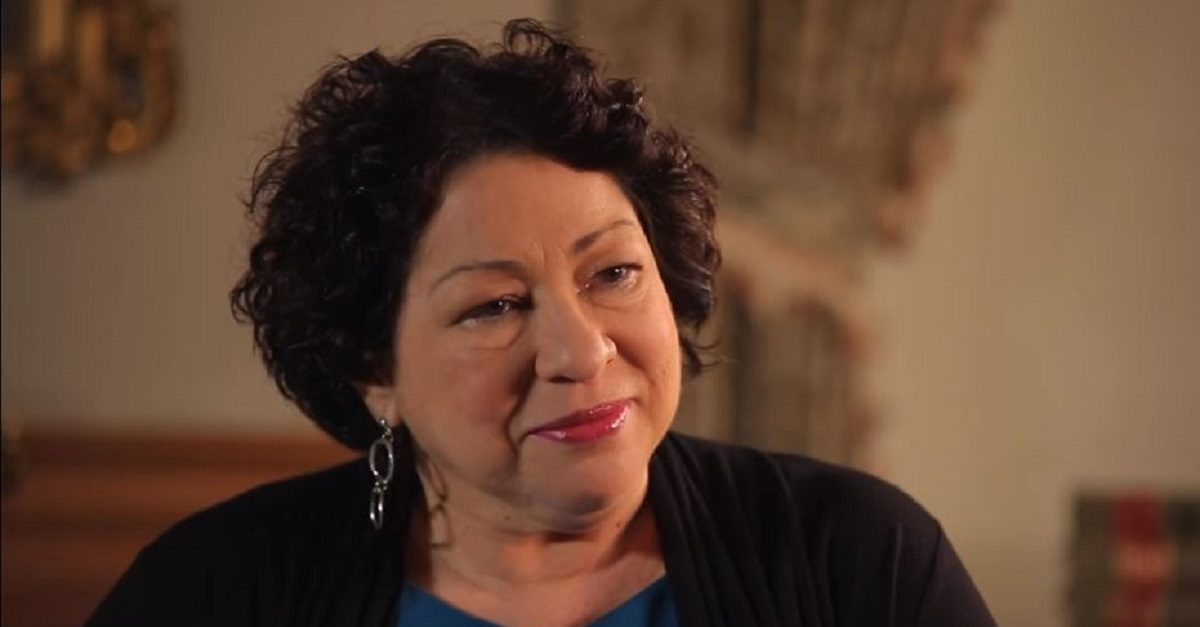 Supreme Court Justice Sonia Sotomayor authored an opinion related to an order on Monday in a case assessing the constitutionality of whether people who are accused of the most minor crimes can be subjected to extremely invasive warrantless searches and traumatized by jail officials.

Sharon Lynn Brown, a Native American and member of the Fond du Lac Band of Lake Superior Chippewa, was arrested for shoplifting, a misdemeanor, in 2017. In Wisconsin, Native Americans are vastly over-criminalized relative to other races and ethnicities, an amicus brief filed by the National Alliance to End Sexual Violence notes. The undisputed facts of the case explain the group’s involvement:

A day after Brown’s arrest, two inmates told jail staff that Brown was hiding drugs in her body. [Correctional officer Steven] Hilleshiem contacted [jail administrator Wes] Revels, who authorized a cavity search. Brown was taken to the hospital, where a male doctor performed an ultrasound that revealed no foreign objects. The doctor then inserted a speculum into her vagina, spread open the vaginal walls, and shined his headlamp inside. He did the same to her anus. He found no contraband.

But even Sotomayor’s opinion soft-pedals that second examination.

The rectal exam began in much the same manner—the doctor used a speculum to widen the anus and peer inside. But during the procedure, the doctor’s headlamp failed. With the speculum remaining in her anus, Brown had to wait while the doctor looked for an alternate light source. In the end, the search yielded no contraband.

“I immediately started crying,” Brown testified–explaining how she felt at the exact moment the jail’s second examination was finally over and done. “I couldn’t stop. I cried myself to sleep. I cried all the way back to the jail. I cried the whole time I was getting dressed.”

“These acts of state-sponsored sexual violence ought to be rare,” the group argued. “A detainee’s right to bodily autonomy should not be overridden by security interests except where those interests are grave and urgent. There are far more reasonable and humane methods of identifying and mitigating a possible safety concern. One such method might be temporarily isolating the detainee in order to observe them and allow their bodies time to expel any contraband. The Fourth Amendment is necessarily violated by a non-consensual body cavity search where less invasive alternatives exist.”

Sotomayor tended to agree with that understanding of the issue and with the organization’s suggestion for how jailhouse inspections for contraband can be conducted without resorting to invasive examinations that render bodily autonomy nil. But, as a technical point, Sotomayor did not actually dissent from the denial for certiorari because, in effect, she thinks the issues at stake have not been litigated enough in the lower courts. (Still, she wrote that the appeals court erred when it failed to consider less-invasive alternatives to speculum-assisted cavity examinations.)

The left-leaning justice penned a separate opinion, however, to comment on the record about the future application of the Fourth Amendment in the age of mass criminalization–citing several of her conservative colleagues’ reservations about such issues:

Two Members of this Court have underscored the importance of considering less intrusive alternatives in the context of searching pretrial detainees. See Florence v. Board of Chosen Freeholders of County of Burlington, 566 U. S. 318, 341–342 (2012) (ALITO, J., concurring) (“[A]dmission to the general jail population, with the concomitant humiliation of a strip search, may not be reasonable” for those who will soon be released, “particularly if an alternative procedure is feasible,” such as separating “minor offenders from the general population”); id., at 340 (ROBERTS, C. J., concurring) (emphasizing that “there was apparently no alternative” to housing the arrestee with the general population).

“If courts permit extraordinarily intrusive searches of pretrial detainees without a warrant, correctional officers may abandon less invasive, but more burdensome, practices,” Sotomayor went on to say later in the opinion. “Likewise, if officers are free to decide for themselves if they have the requisite degree of suspicion, some may cross the line, even if in perfectly good faith.”

“If an officer has probable cause to believe that an individual has committed even a very minor criminal offense in his presence, he may, without violating the Fourth Amendment, arrest the offender.” Atwater v. Lago Vista, 532 U. S. 318, 354 (2001). Meanwhile, “criminal laws have grown so exuberantly and come to cover so much previously innocent conduct that almost anyone can be arrested for something.” Nieves v. Bartlett, 587 U. S. ___, ___–___ (2019) (GORSUCH, J., concurring in part and dissenting in part) (slip op., at 1–2). An unbuckled seatbelt, a noisy muffler, an unleashed dog: Any one of countless petty misdemeanors might land you in jail. See Florence, 566 U. S., at 346–347 (BREYER, J., dissenting).

“[T]his is not the case to decide whether a penetrative cavity search is necessarily unreasonable in light of [the] potential alternatives,” she concludes. “Going forward, however, courts must consider less intrusive possibilities before categorically allowing warrantless searches. This obligation weighs particularly heavily for dehumanizing searches of pretrial detainees like that which Brown endured.”