‘Read the Opinion’: In Speech at Reagan Library, Justice Amy Coney Barrett Says Supreme Court Is Not Trying to ‘Impose a Policy Result’ 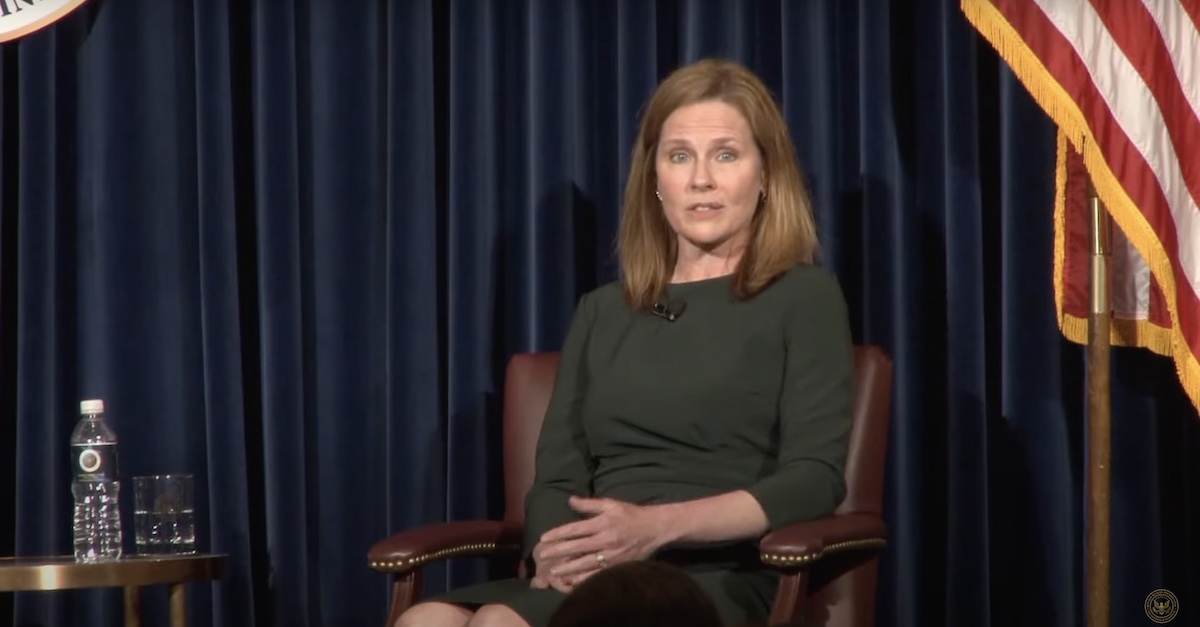 With politically divisive cases on topics like abortion and gun control coming before the Supreme Court soon, Justice Amy Coney Barrett encouraged Americans to actually read the written opinions and not assume the nation’s highest court is looking to impose any sort of political policy results.

Barrett was nominated to the Supreme Court by former President Donald Trump in 2020 to fill the seat previously held by the late Justice Ruth Bader Ginsburg. Her confirmation hearings less than one month before the presidential election that year heightened the political tensions attendant to replacing liberal icon Ginsburg with a conservative judge who had clerked for the late Justice Antonin Scalia. Barrett was ultimately confirmed by a vote of 52-48 nearly along party lines, with Sen. Susan Collins (R-ME)—in a tough re-election battle at the time—being the sole Republican to join the Democrats in opposing Barrett’s nomination.

Barrett made her remarks during a speech Monday at the Ronald Reagan Presidential Library, during a brief recess in the court’s schedule.

“Read the opinion,” she urged audience members, and consider the court’s reasoning instead of judging the ruling solely based on whether or not it was compatible with their own personal political views.

“It’s not just the result that matters. You can disagree with the result passionately,” she explained. “No judge is deciding a case in order to impose a policy result. They are trying to make their best effort to determine what the law requires.”

“Does [the decision] read like something that was purely results driven and designed to impose the policy preferences of the majority, or does this read like it actually is an honest effort and persuasive effort, even if one you ultimately don’t agree with, to determine what the Constitution and precedent requires?” Barrett continued. “Is its reasoning that of a political or legislative body, or is its reasoning judicial?” she asked.

Barrett has made similar comments before, defending the court against criticism that it is driven by politics.

“My goal today is to convince you that this court is not comprised of a bunch of partisan hacks,” she said in a speech last September. That goal seemed to have been thwarted by the occasion and location of her speech: the 30th anniversary celebration for the McConnell Center at the University of Louisville, named for Senate Minority Leader Mitch McConnell (R-Ky.)—and McConnell himself was seated on stage next to the podium as she spoke.

An audience member asked if the Supreme Court should adopt guidelines for justices’ spouses in order to avoid conflicts, but Barrett dismissed that as unnecessary.

“Everybody is very attentive to those sorts of things,” she said. “It is something that we are very conscious of and very careful about.”

The question was framed around Barrett’s husband, who is also an attorney, but observers noted the potentially wider implications, specifically regarding the recent controversy regarding Justice Clarence Thomas’ wife Virginia “Ginni” Thomas. Ginni Thomas’ text messages showed that she was communicating directly with members of Trump’s inner circle in the aftermath of the 2020 election and supporting efforts to overturn President Joe Biden’s victory. She also attended the pro-Trump rally on Jan. 6, 2021 that preceded the attack on the U.S. Capitol, leaving before it turned violent.

Liberals have called for Justice Thomas to recuse himself from cases involving the 2020 election or the Jan. 6 Capitol attack, and some have gone so far as to demand that he resign.

Judge Ketanji Brown Jackson is expected to be confirmed this week to take over for retiring Justice Stephen Breyer. Barrett was asked what advice she would give to a new Justice.

“I think one of the difficult things that I experienced, that I wasn’t really fully prepared for, was the shift into being a public figure,” Barrett said. “Also, security is much different now…We all have security details and that’s different.”

Barrett’s remarks were briefly interrupted by a heckler, who shouted that she was an “enslaver of women.”

“Yes, fortunately, as a mother of seven, I am used to distractions. And sometimes even outbursts,” Barrett joked in response to the interruption.

Watch the video above, via the Reagan Foundation on YouTube.