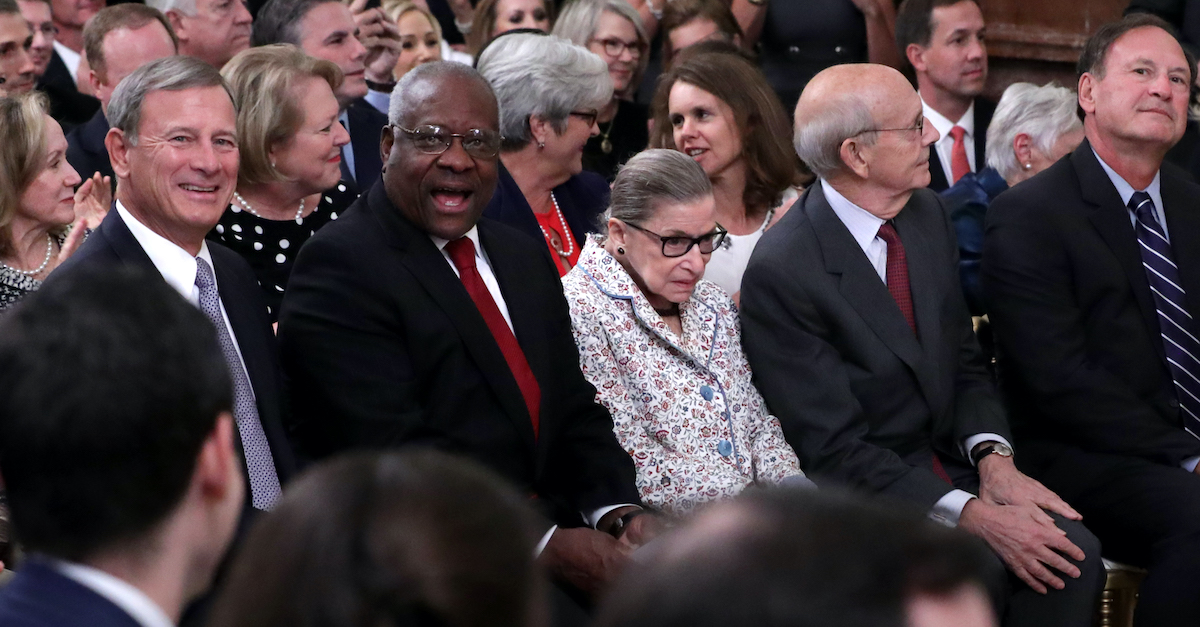 The Supreme Court unanimously held that the Ninth Circuit “panel’s drastic departure from the principle of party presentation” in the case of immigration consultant Evelyn Sineneng-Smith “constituted an abuse of discretion.” Ginsburg penned the opinion for the court; Thomas filed a concurring opinion that took things a step further.

“The Nation’s adversarial adjudication system follows the principle of party presentation. Greenlaw v. United States, 554 U. S. 237, 243. ‘In both civil and criminal cases, . . . we rely on the parties to frame the issues for decision and assign to courts the role of neutral arbiter of matters the parties present,'” the Supreme Court’s holding said. “That principle forecloses the controlling role the Ninth Circuit took on in this case. No extraordinary circumstances justified the panel’s takeover of the appeal. Sineneng-Smith, represented by competent counsel, had raised a vagueness argument and First Amendment arguments homing in on her own conduct, not that of others. Electing not to address the party-presented controversy, the panel projected that [8 U.S.C.] §1324(a)(1)(A)(iv) might cover a wide swath of protected speech, including abstract advocacy and legal advice. It did so even though Sineneng-Smith’s counsel had presented a contrary theory of the case in her briefs and before the District Court.”

The Court called the Ninth Circuit‘s hijacking of the case a “radical transformation” that went “well beyond the pale.”

Sineneng-Smith is a U.S. citizen who worked as an immigration consultant in San Jose, California for almost 20 years; in her practice, she helped non-citizens navigate the American immigration system. Sineneng-Smith was charged in 2010 in connection with helping three undocumented workers and their employers complete applications for employment-based lawful permanent residence. Among the charges were three felony counts under 8 U.S.C. § 1324(a)(1)(A)(iv), for Sineneng-Smith’s use of “dangerous words,” and for “words and … deeds” aimed at “encourag[ing] or induc[ing] an alien to come to, enter, or reside in the United States.” The § 1324 charges were the focus of the ensuing appeal, not the tax fraud charges Sineneng-Smith pleaded guilty to committing nor the mail fraud counts. Even though there was already sufficient evidence to support the fraud conviction, the government chose to bring criminal charges based on immigration advocacy generally.

Sineneng-Smith argued that the “encouragement provision” was facially unconstitutional in that it illegally abridged free speech.

But according to the Supreme Court, the Ninth Circuit mangled the appellate proceedings.

“Instead of adjudicating the case presented by the parties, the appeals court named three amici and invited them to brief and argue issues framed by the panel, including a question Sineneng-Smith herself never raised earlier: ‘[W]hether the statute of conviction is overbroad . . . under the First Amendment,'” Ginsburg wrote [citations removed for ease of reading]. “In the ensuing do over of the appeal, counsel for the parties were assigned a secondary role. The Ninth Circuit ultimately concluded, in accord with the invited amici’s arguments, that §1324(a)(1)(A)(iv) is unconstitutionally overbroad. The Government petitioned for our review because the judgment of the Court of Appeals invalidated a federal statute. We granted the petition.”

The high court consequently vacated the Ninth Circuit’s judgment and remanded the Sineneng-Smith case so that it could be decided—not as “designed by the appeals panel” but as argued by the parties.

Justice Thomas agreed there the Ninth Circuit committed an “abuse” of discretion, but offered some additional thoughts on the overbreadth doctrine, which “focuses on the need for precision in drafting a statute that may affect First Amendment rights.”

Thomas said he’s applied this doctrine in the past but now has his doubts that it has any constitutional basis:

I agree with the Court that the Ninth Circuit abused its discretion in reaching out to decide whether 8 U. S. C. §1324(a)(1)(A)(iv) is unconstitutionally overbroad. In my view, however, the Court of Appeals’ decision violates far more than the party presentation rule. The merits of that decision also highlight the troubling nature of this Court’s overbreadth doctrine. That doctrine provides that “a law may be invalidated as overbroad if ’a substantial number of its applications are unconstitutional, judged in relation to the statute’s plainly legitimate sweep.’” United States v. Stevens, 559 U. S. 460, 473 (2010) (quoting Washington State Grange v. Washington State Republican Party, 552 U. S. 442, 449, n. 6 (2008)). Although I have previously joined the Court in applying this doctrine, I have since developed doubts about its origins and application. It appears that the overbreadth doctrine lacks any basis in the Constitution’s text, violates the usual standard for facial challenges, and contravenes traditional standing principles.

“I would therefore consider revisiting this doctrine in an appropriate case,” Thomas wrote.