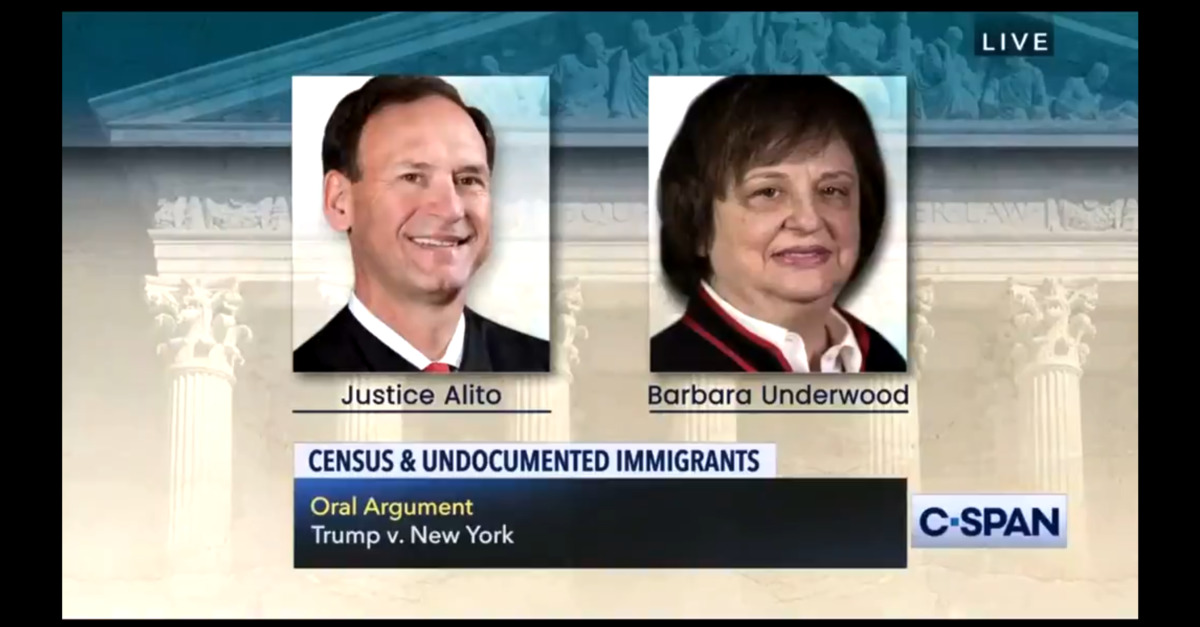 U.S. Supreme Court Justice Samuel Alito was raked through the coals on Monday after he repeatedly ignored the chief justice and delayed Justice Sonia Sotomayor from asking questions during oral arguments in a high-profile case about the role of undocumented immigrants for apportionment purposes.

New York Solicitor General Barbara Underwood was being quizzed during her time on the digital dais about the Empire State’s opposition to the Trump administration’s controversial efforts to exclude undocumented immigrants from the redistricting process.

As Underwood finished answering one of Alito’s questions regarding the potential impact of the high court’s decision in the case stylized as Trump v. New York, Chief Justice John Roberts attempted to move down the line of appointment by calling on Sotomayor. That didn’t quite work out as Justice Alito barrelled on through, going over his time and asking Underwood another question.

“If I can–If I can move on to my second–my second point,” Alito, a fellow Bush appointee, ignored Roberts. “I want to give you six categories of people and ask you to answer ‘yes’ or ‘no’ to the extent you can whether you think these people in each of these categories must be counted for apportionment purposes.”

Alito went on to rattle off three categories of people before Roberts cut him off and attempted to get the liberal justice her due time.

“Uhh, the chief–” Alito attempted before being cut off a third and final time by Roberts.

Questioning then resumed as scheduled.

Response from legal commentators was brutal and of a piece.

“Yeah, this was really bad,” tweeted former legal journalist and current criminal justice reform advocate Chris Geidner. “And fits with a long pattern of Alito needing to be cut off by the chief, even before the pandemic.”

Norman Ornstein, a scholar at the right-wing think tank the American Enterprise Institute, took the opportunity to unload on Alito for his behavior as a jurist and his allegedly back-engineered and result-focused judicial philosophy.

“He is and has long been a partisan zealot,” Ornstein tweeted. “Predetermines conclusions, then finds a way to justify them. A terrible, terrible justice.”

University of Richmond School of Law Professor Corinna Lain noted a personal connection to Alito that, according to her, in no way made up for talking out of turn.

“I really wanted to dislike Alito less because he cited me this past summer,” she said via Twitter. “But I can’t.”

“This is the second time in recent days that a justice from the new conservative majority has pointedly ignored the chief’s authority and belittled their liberal colleagues,” he tweeted before posing his thesis in the form of a question. “Signs of a new social order among the court now that conservatives don’t need Roberts’ vote?”