After Major SCOTUS Decision, School District Agrees It ‘Shall Not Interfere’ with On-Field Prayer When Football Coach Returns to Sidelines This Spring 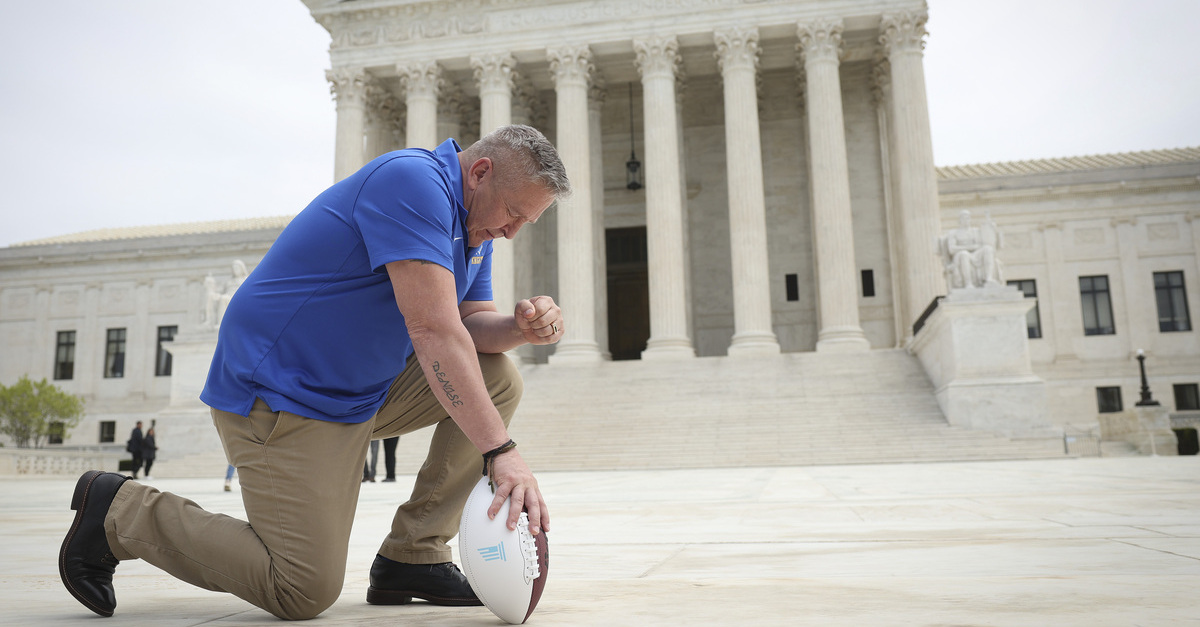 Former Bremerton High School assistant football coach Joe Kennedy kneels in front of the U.S. Supreme Court after his legal case, Kennedy vs. Bremerton School District, was argued before the court on April 25, 2022 in Washington, DC.

Joe Kennedy, widely known as the “praying football coach” after successfully taking his case to the Supreme Court of the United States, will finally return to coaching eight years after he was put on leave for praying with students on-field.

SCOTUS ruled 6-3 in Kennedy’s favor last June. In doing so, the high court upended decades of precedent providing structure to challenges of government “endorsement” of religion.

Kennedy had been the head coach for the junior varsity football team and an assistant coach for the varsity team at Bremerton High School from 2008-2015. He regularly kneeled and briefly prayed at the 50-yard line after football games. According to the coach, he was simply fulfilling a personal pledge to “give [God] the glory after every game, win or lose.” Students were not required, but were “invited” to join Kennedy in prayer.

When the school district became concerned that Kennedy’s praying posed legal concerns, it instructed him to stop the practice. Kennedy refused, and after several jousts with the district and local press, the case escalated to a First Amendment lawsuit in federal court.

Ultimately, Kennedy won his case at the hands of a conservative Supreme Court that has become increasingly friendly to religious liberty claims. Later, the case was remanded to provide Kennedy relief consistent with the ruling.

Following the ruling in Kennedy’s favor, many expected to find the coach on the sidelines as the Bremerton High School Knights began their season in September 2022. Kennedy’s employment had never been terminated by the district because of his controversial praying; rather, the district maintained that Kennedy’s contract had expired and the district chose not to renew it.

There are conflicting reports about what has happened since Kennedy’s win at SCOTUS. The school district says it complied with the Supreme Court’s order and offered to reinstate Kennedy — but that Kennedy never officially reapplied for the position.

“He’s had the paperwork for his reinstatement since August 8th, and we haven’t gotten so much as a phone call,” Bremerton schools spokesperson Karen Bevers told the Seattle Times in September 2022.

Lawyers for Kennedy, however, say that the coach has been trying to get back on the field for years, and that the school district has thwarted his efforts at every turn. Although the Supreme Court ruled that Kennedy has the right to his position, the parties still needed to work out the specifics — which includes Kennedy’s claim for $5.5 million in attorneys fees and the terms of the coach’s return to work.

The two sides were not able to resolve their negotiations before the start of the season. Although Kennedy did not make an immediate return to the filed, he began using his notoriety as a springboard into speaking engagements and public events.

A court filing Tuesday, however, indicates that Kennedy will indeed retake the field as a coach.

Kennedy and the Bremerton School District filed a joint stipulation indicating that Kennedy will be reinstated in his position as assistant coach no later than March 15, 2023. The parties also agreed that once Kennedy resumes coaching, the district “shall not interfere with or prohibit Kennedy from offering a prayer consistent with the U.S. Supreme Court’s opinion,” though they noted that they continue to disagree with the specific wording of the proposed court order on the injunction.

Further, the district “cannot retaliate against or take any future adverse employment action against Kennedy for conduct that complies with the terms of the Court’s Order.” The stipulation also agrees that Kennedy is entitled to “reasonable attorneys fees” and directs him to submit records to back up any fee claims.

“When the US Supreme Court concluded that Coach Kennedy’s prayer by himself at the 50-yard line after games was in keeping with the Constitution and our nation’s best traditions, it was inevitable that he would return to the field,” Jeremy Dys, who represents Kennedy as senior counsel with First Liberty, told Law&Crime on Friday. “Coach looks forward to returning with his guys on or before March 15, 2023.”

When asked to comment on Kennedy’s failure to resume his coaching duties at the start of the 2022-23 season, Dys said the delay was not due to lack of interest on Kennedy’s part, but rather, because the parties had yet to resolve the specifics of their plans.

“Rather than disrupt a season in motion, he thought it better to simply start again when new coaches typically join a team: the spring,” said Dys.

Representatives for the school district did not immediately respond to Law&Crime’s request for comment.