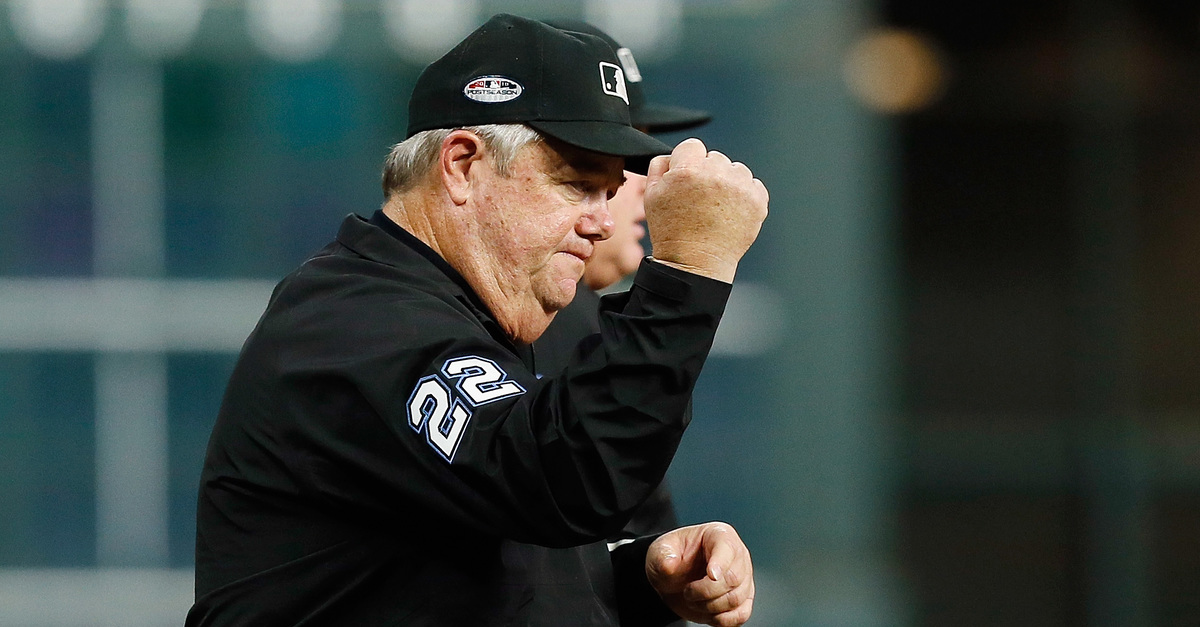 Umpire Joe West calls out Jose Altuve #27 of the Houston Astros (not pictured) on fan interference in the first inning during Game Four of the American League Championship Series between the Boston Red Sox and the Houston Astros at Minute Maid Park on October 17, 2018 in Houston, Texas.

Joe West, Major League Baseball’s most senior umpire, just won a defamation lawsuit against a former player who accused him of accepting a novel sort of bribe in exchange for favorable calls.

That ex-player, former New York Mets and Los Angeles Dodgers catcher Paul Lo Duca, is now on the hook for $500,000 “plus statutory judgment interest” over the allegation, according to a Monday order by New York Supreme Court Judge John J. Kelley.

The controversy began in spring 2019 when Lo Duca appeared on a popular podcast hosted by The Action Network and told a story about a game in 2006 or 2007 where Mets closer Billy Wagner was allegedly gifted a wider strike zone by the outspoken umpire (West) in exchange for borrowing his (Wagner’s) 1957 Chevrolet.

During the podcast, Lo Duca recounted Wagner’s alleged words about the alleged bribe during a game against the Philadelphia Phillies.

A June court order recounts most of the segment in question:

We get back into the clubhouse and I’m like, ‘What the f**k just happened just right now?’ and Wagner just winks at me.

He goes, ‘Yeah, so then he opens up the strike zone for me.’

West disputed that any such game even existed by pointing to statistics.

“In reality, during 2006 and 2007, the two years that Lo Duca played for the New York Mets with Billy Wagner, Joe West was the home plate umpire for a game between the Philadelphia Phillies and the Mets only once, Billy Wagner did not pitch at all, and the game ended on a home run, not on called strikes,” the original complaint noted.

In the court’s Monday order, the umpire was absolved by history.

Judge Kelley, in reaching his decision, also credited West’s assessment of the harm caused to his reputation by Lo Duca’s false story.

The court credits the plaintiff’s testimony that one’s integrity and character are primary measures that are applied to the assessment of an umpire’s or player’s quality and, thus, the consideration that he will be given for election to, and induction into, the Hall of Fame. The plaintiff expressed a legitimate concern that, if Hall of Fame voters credited Lo Duca’s false assertion regarding his integrity and character, he might not be elected for induction into the Hall of Fame for the same reasons as otherwise excellent players “Shoeless” Joe Jackson, Pete Rose, and Barry Bonds had or have not been elected. He also expressed concern that it would be difficult to completely repair his reputation, particularly because a special committee of baseball executives and former players chosen by the directors of the Hall of Fame is responsible for selecting umpires for induction into the Hall of Fame.

In sum, the court ruled that West was entitled to an award of $250,000 for past mental anguish and emotional distress and an additional $250,000 in special damages “for expenses he will need to incur in retaining a public relations firm to formulate and operationalize a sufficient reputation remediation plan.”