Woman Sped from Shooting Scene with Mortally Wounded 11-Month-Old in the Car: ‘I Couldn’t Save Her’ 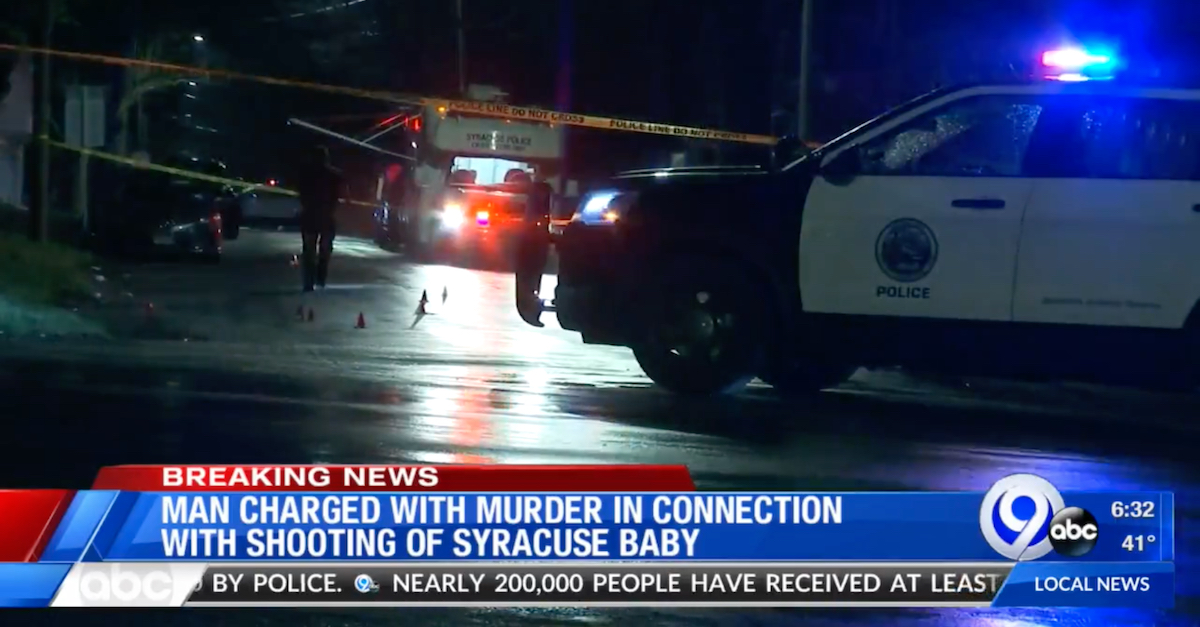 An Upstate New York man is accused of murder in connection with a shooting which killed an 11-month-old baby on a street behind a Syracuse elementary school. The infant, Dior Harris, was killed Sunday night shortly before 6:50 p.m., according to the Syracuse Police Department and additional details uncovered by both WSYR-TV and the Syracuse Post-Standard.

Harris was in the back seat of a vehicle when gunfire erupted. She was shot three times, the reports indicate.

Two other girls, ages 3 and 8, were also struck, said Deputy Chief Derek McGork in a Monday morning news conference. They are “expected to recover,” WSYR said. The mothers of the children — Desiree Seymore, Harris’s mother, and Shakema Buckmon, Seymore’s cousin — were in the front seat and were not hurt. The families were on the way to the grocery store.

“We learned that the victim’s vehicle was occupied by two adults and the three children,” McGork continued. “They were traveling in the 300 block of Grant Avenue eastbound, and the suspect vehicle was traveling westbound at the same location. Shots were fired at the victims’ vehicle as the victim drove off.  At some point thereafter, she realized that the children were injured. She drove to the 100 block of Lincoln Ave where she called 911. One of the females and three children were taken to Upstate Hospital for treatment.”

The newspaper further explained that Buckmon, who was driving, “sped to a relative’s house . . . to get away from the gunshots and get help.”

She recounted what happened as she fled the scene a tearful interview with WSYR.

“This is a nightmare; an unimaginable tragedy,” said Syracuse mayor Ben Walsh in a Monday news conference. “All of my thoughts right now are with the family.”

Walsh said he personally went to the scene and described first responders as “heroes” for protecting and caring for the survivors.

“This tragedy is the definition of senseless,” the mayor added. “How could anyone in their right mind point a gun at a car with children in it in broad daylight and pull the trigger? It is incomprehensible. The trauma inflicted on these children, the family, the first responders, and the community will be with us forever.”

According to Onondaga County Justice Center jail records reviewed by Law&Crime, Chavez R. Ocasio, 23, is accused of murder, tampering with physical evidence, violating parole, and a firearms offense, reportedly in connection with this case. He pleaded not guilty Tuesday morning, WSTM-TV reported.

Chavez Ocasio, charged with the murder of 11-month-old Dior Harris, was arraigned in court today. Pleaded NOT GUILTY to the following charges:
-murder in the second degree
-criminal possession of a weapon
-tampering with physical evidence@CNYCentral https://t.co/IRswmMD5yC

The arraignment revealed that authorities obtained video surveillance of the shooting.

“[A]t least five gunshots were fired from an illegal firearm on the driver’s side of a blue 2003 Honda Accord, of which Ocasio is the registered owner,” WSTM reported. The station cautioned that it was unclear “whether Ocasio was the driver,” the shooter or both. Legally, he could face murder charges either way.

“Ocasio also allegedly erased his phone data while being interviewed by police,” WSTM said. “He was previously arrested in 2014 for shooting a 13-year-old in the head.”

Ocasio’s arrest occurred late Monday, several local news reports indicate; earlier that day, the police were still pleading for help in solving the case.  The chief of police called the area where the shooting occurred the city’s “ground zero” for violence.

[image via screen capture from WSYR-TV]