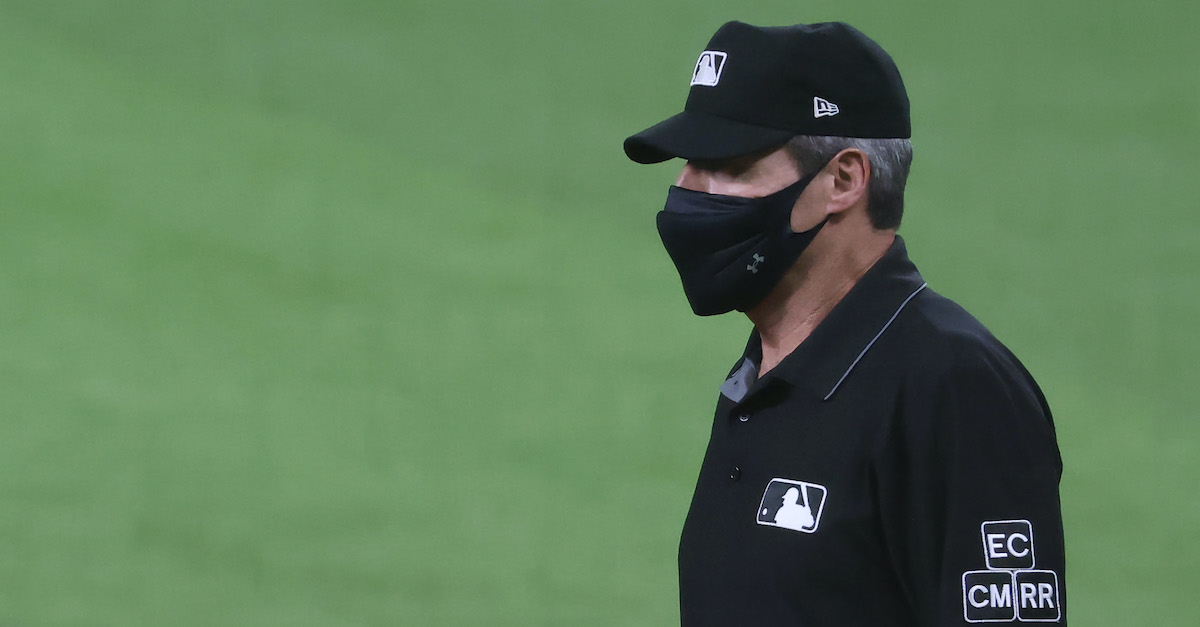 Umpire Angel Hernandez #5 looks on from first base during Game One of the National League Divisional Series between the San Diego Padres and the Los Angeles Dodgers at Globe Life Field on October 6, 2020 in Arlington, Texas.

Umpire Angel Hernandez struck out in his lawsuit alleging that his Cuban descent stood made the league pass him over several times for crew chief in favor of his white colleagues. Rattling off performance concerns that made the umpire the bane of ex-New York Yankees manager Joe Torre, a federal judge in the Empire State ruled on Wednesday that no reasonable jury could find racial discrimination at the heart of these snubs.

“The court is mindful of the reality of unconscious bias and of the ‘built-in headwinds’ that can ‘freeze out protected groups from job opportunities and advancement,'” District Judge J. Paul Oetken wrote in a 26-page opinion. “With respect to Hernandez’s non-promotion claims in this case, however, there is insufficient evidence to show a triable issue on either a disparate treatment or disparate impact theory.”

Widely described as the worst umpire in the game, Hernandez’s reputation was put to the test by Boston University, whose researchers found his colleague Joe West made more bad calls then he did. But Hernadez still had a “high error rate,” roughly “averaging 19 incorrect calls a game, or 2.2 per inning,” according to the university.

In 2017, Hernandez sued Major League Baseball in a lawsuit alleging discrimination and a lack of diversity, citing a study from five years earlier finding that only seven-percent of his peers belonged to racial or ethnic minorities.

Hernandez complained that the last time he was assigned to the World Series was 2005, four years after then-Yankees manager Torres publicly criticized one of his calls. Torre became the league’s baseball executive in 2011 and chief baseball officer in 2015, keeping the latter position until December 2019.

Though Hernandez claimed Torre had a “history of animosity” toward him over their dispute over the 2001 game, Torre told the court that the umpire “had not consistently demonstrated the high level in those areas of performance” required to be crew chief or assigned to the World Series in 2011.

“To be sure, the record is not transparent about the weight Torre affords the criteria he uses in promotion decisions,” Judge Oetken wrote. “But there is nothing suggesting that unlawful discrimination is a factor in those decisions. The undisputed evidence reveals that the promotion determination takes into account a number of factors — some of which are somewhat subjective — and prioritizes an umpire’s leadership and situation management. MLB’s slightly different explanations are not genuinely inconsistent, but are a reflection of the subjective and multifaceted nature of this determination. This evidence is insufficient to establish a genuine dispute of fact on pretext.”

Judge Oetken added that the evidence showed that Torre based his decisions on performance.

“The evidence shows beyond genuine dispute that an umpire’s leadership and situation management carried the day in MLB’s promotion decisions,” Oetken wrote. “Torre testified that the candidates he appointed to crew chief instead of Hernandez ‘have not demonstrated the same pattern of issues and to the same extent that have manifested with Hernandez over the years.’ […] And indeed, the promoted umpires have evaluations with comments that lend support to Torre’s statement.”

Attorneys for Hernandez and the league did not immediately respond to emails requesting comment.