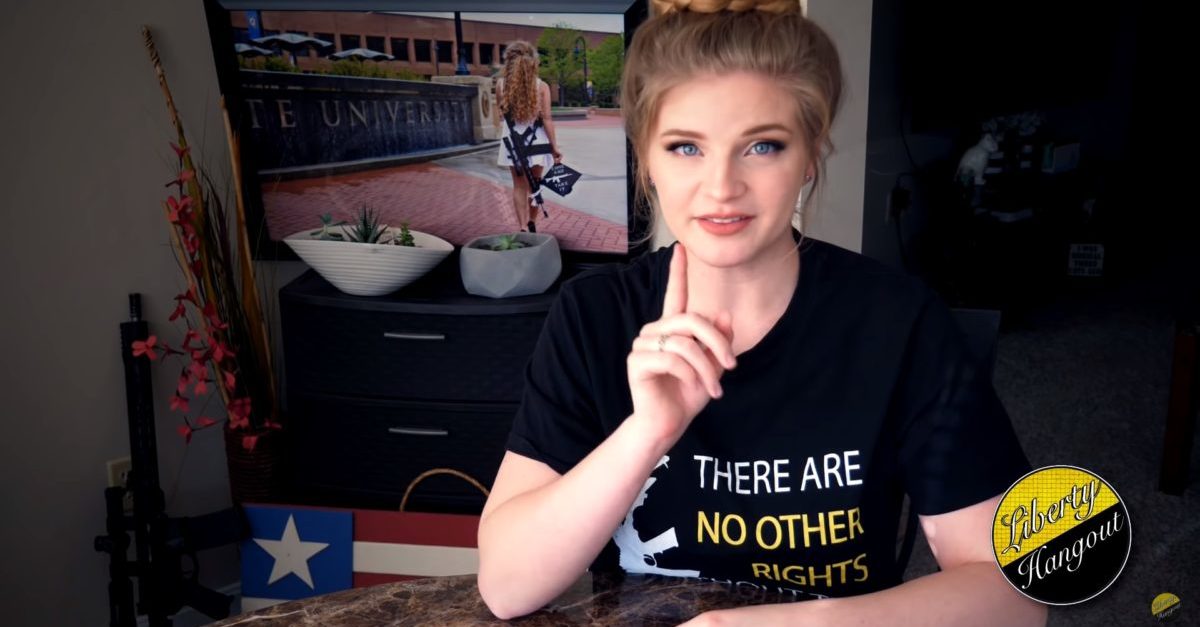 In what might be described as a response to a perceived troll job instigated by people like Susan B. Anthony and Elizabeth Cady Stanton more than a hundred years before she was even born, campus carry activist Kaitlin Bennett took aim at the 19th Amendment because, in her apparent view, protecting the 2nd Amendment is superior to it. The 19th Amendment, introduced in 1878 but not ratified until 1920, guaranteed to women the right to vote. The 2nd Amendment, which guarantees the right to bear arms, was written by James Madison as part of the original Bill of Rights in 1789 and was ratified December 15, 1791.

Bennett, best known for conspicuously portraying her AR-10 rifle in Kent State University graduation photos and — in her own words — “master[ing] the art of going viral,” tweeted Tuesday that “letting women vote in this country wasn’t one of the best ideas.”

“Females vote with emotion and overwhelmingly support Democratic feel-good policies that take away our ACTUAL rights. I’d rather lose my ‘right’ to vote than lose my right to defend myself with a firearm!” she said, placing the 2nd Amendment as superior to the 19th. Bennett made the observations in response to a map which purported to show the outcome of a hypothetical presidential election where only women voted. The map was overwhelmingly blue.

Honestly, letting women vote in this country wasn’t one of the best ideas. Females vote with emotion and overwhelmingly support Democratic feel-good policies that take away our ACTUAL rights. I’d rather lose my “right” to vote than lose my right to defend myself with a firearm! pic.twitter.com/Ztre6yFATR

That’s right, Kaitlin, you own those libs. https://t.co/rFxoJOCGHG

In an effort to point out the inherent fallacy of the argument, many reponses trolled Bennett by flipping the script.  They pondered — to use Bennett’s hypothetical — that if women were too “emotional” to vote, then they — or, more precisely, Bennett herself — were concomitantly too “emotional” to put a finger anywhere close to a trigger:

Follow-up question: how much attention will be enough?

Ummm, if you believe women are too emotional to vote, then why would you think carrying a gun is a good idea?

A few snarky comments attempted to argue in favor of Bennett but were immediately deflated by the injection of the example of none other than Supreme Cout Justice Brett Kavanaugh:

As much as I hate to admit it. You’re not wrong about females being emotional. I agree that no woman should hold office. We’re all very emotional. Some show it more than others but it’s true.

Bennett simply claimed the “emotional” response to her tweet proved her point.

Lots of emotional responses to this tweet. As always, thanks for proving my point everyone!

Bennett has a track record of thanking liberals for helping her live rent-free inside their heads.

I just want to remind everyone that I didn’t gain “fame” on my own. People only know who I am because of leftists who have been giving me free promotion for two years now. The people mad at my existence are the ones responsible for my platform. Congrats, you played yourselves! pic.twitter.com/2Io6AkBtLu

Thankfully for all involved, this fight which pitted the 19th and the 2nd Amendments against one another has not yet entangled the 1st Amendment.