Guns And Gays, Together At Last (Thanks To Trump And His Alt-Right Supporters) 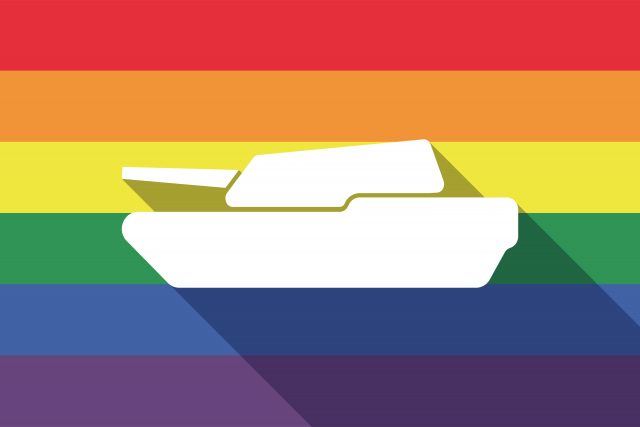 There’s an old adage about the political priorities of social conservatives: “Guns, God and Gays.”

These three Gs are, as the story goes, the foremost issues that motivate conservative and Republican voters because: (1) they fear liberals would come for their guns if given half a chance; (2) they fear God as everyone should–in a pietistic sense; and (3) they’re simply afraid of gay people (or maybe they’re afraid they might be gay–which is often the same thing, according to science.)

There’s also a sometimes tacit, but increasingly explicit tendency among liberals and Democrats to denigrate the voters they can’t reach electorally by shrugging off so-called “culture war” issues and dismissing entire swathes of people. It’s pure political nihilism, but hey, that’s the Democratic Party at its finest.

Think: Barack Obama‘s “clinging to guns and religion” brouhaha or a marquee round of Nancy Pelosi‘s whinging about Hillary Clinton‘s inability to connect with certain voters.

Now, one group in New York State aims to up-end some of that received political wisdom–as far as guns and gays are concerned at least. And they’ve got a catchy name to boot the power out of those old ideas.

Trigger Warning is an LGBTQ gun club (full name: Trigger Warning Queer & Trans Gun Club) that intends to broaden gun culture, move it leftward and away from the narrowly-conceived confines of right-wing fanaticism in order to protect the LGBTQ community from the rising tide of loud and violent—if not necessarily plentiful in number–American fascists.

In other words, Trigger Warning is the left-queer response to the brazen language and actions of the alt-right, white nationalists, Trump supporters, neo-Nazis, and other components of the increasingly prevalent far right on the American political and social landscape.

In an interview with the New York Daily News, Jake Allen, a 27-year-old who co-founded the group, said:

It’s a way to assert our strength. Often, queer people are thought of as being weak, as being defenseless, and I think in many ways this pushes back against that. And I want white supremacists and neo-Nazis to know that queer people are taking steps necessary to protect themselves.

Trigger Warning started up earlier this year in Rochester, New York. They meet once a month to fire at sitting targets and clay pigeons. The group presently has 18 dues-paying members–most of whom are newcomers to gun culture.

Zora Gussow is another member. Expressing the left’s general apprehension toward gun culture in personal terms, she said, “I grew up afraid of guns. The first time I was near a gun in a house, it was of one of my friend’s, and I basically jumped back. And that feels dangerous to me in a society where there are so many guns.”

After the election of Trump, the rise of the alt-right’s media profile and the violence in Charlottesville, such attitudes among the left look likely to change–at least for now. Aside from Trigger Warning, various left-wing gun clubs have sprouted up and existing ones (such as the National African-American Gun Association and the Pink Pistols) have seen their membership spike.

There’s also another Trigger Warning chapter in Atlanta and Allen says he’s received questions about starting up groups in nearly a dozen other cities. But not everyone on the left sees the arming of the left as a positive sign.

Is an arms race what we really want? What we know in any arms race is that it’s never good for anybody, and death and destruction and harm and hurt can come when so many people have arms and weapons.

Fearing’s attitude has held the day for liberals and leftists for quite some time. And even if Trigger Warning and other such clubs are not necessarily indicative of a sea-change among the American left, there’s definitely something happening here.