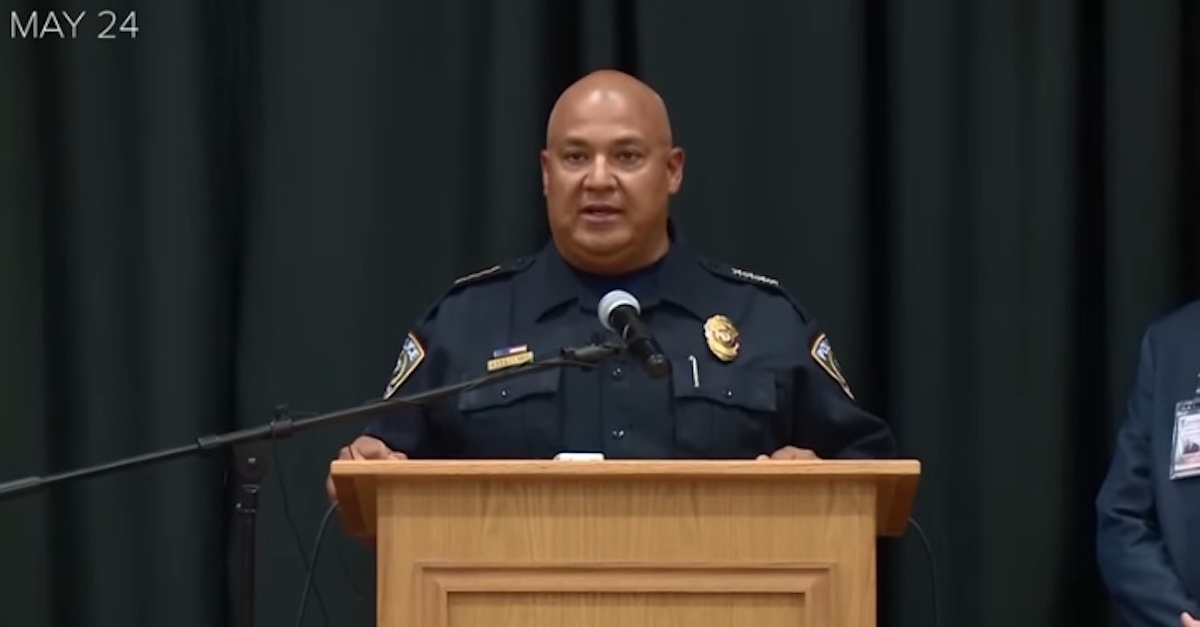 Pete Arredondo is seen at a press conference following the May 24, 2022 mass shooting at Robb Elementary School in Uvalde, Tex. (image via YouTube screengrab/KENS)

As an armed gunman attacked children inside a Texas elementary school classroom, the man who ran the school district police force says he was just outside the classroom door, trying to find the single key that could get him inside.

It took him more than an hour.

In an extensive interview with the Texas Tribune, the chief of police for the Uvalde school district, Pete Arredondo, detailed scenes of chaos and confusion as he and other law enforcement officials responded to the May 24 massacre, which left 19 students and two teachers dead.

In what the Tribune is billing as the school district police chief’s “first extended comments” since the May 24 shooting, Arredondo answered questions during a phone interview and through statements provided by his lawyer, George E. Hyde.

Arredondo told the Tribune that he was one of the first people to respond to the shooting, and that he wanted to get into the two adjoining classrooms—where the gunman had locked himself inside—as quickly as possible.

Since the classroom door was reinforced with a steel jamb that prevented anyone—such as an attacker or, in this case, the police—from kicking the door down, Arredondo, who said he believed at that time that he was dealing with a hostage situation and not an active shooter, told the Tribune that he believed that finding the right key was his only option.

But because school district police officers don’t carry master keys to the schools, the Tribune story said, Arredondo had to wait for the right key to be brought to him.

A janitor first provided him with six keys, the Tribune reported. Arredondo tried each of them on a door adjacent to the classroom where the shooter carried out his attack behind the locked and steel-reinforced door, but none worked.

Sometime later, Arredondo was provided with a key ring between 20 and 30 keys.

“I was praying one of them was going to open up the door each time I tried a key,” Arredondo told the Tribune.

None of those keys worked either.

As the Tribune reported, officers on the north side of the hallway ultimately found a key that could open the door, and a team of local law enforcement and U.S. Border Patrol agents entered the classroom, ultimately taking down the gunman, 18-year-old Salvador Ramos.

“We’re trying to preserve the rest of the life.”

Apparently adding to the chaos was the fact that Arredondo deliberately left his police and campus radios outside the school when he entered the building. He told the Tribune that he believed that carrying the radios would slow him down: one had a “whiplike” antenna that would hit him as he ran, the Tribune reported, and the other had a clip that would cause the radio to fall off his belt if he was running.

Arredondo also said that he knew that the radios didn’t work in some of the school buildings.

The Tribune report was published on the same day as the New York Times story that detailed law enforcement’s seemingly chaotic and disorganized response to the massacre-in-progress.

According to that report, at least 12 of the 33 children and three teachers inside the two classrooms were still alive during the 77 minutes between when the shooting began to when officers were able to get inside.

Investigators are still working to determine whether any lives could have been saved during that time, the Times reported, citing an official with knowledge of the investigation. But as the Times noted, it’s clear that some victims desperately needed medical attention, including a teacher who died at an ambulance and three children who died at nearby hospitals.

According to the Times, as local law enforcement and Border Patrol agents gathered outside the school, they were told to hold off on going inside.

Arredondo told the Tribune that it wasn’t him, and that he had assumed that another official had taken over the response to the shooting. He said he considered himself as a front-line responder, and not as the scene’s incident commander.

However, Texas Department of Public Safety officials have described Arredondo as just that, according to the Times, and have said that he’s the one who told law enforcement to stand down and treat the incident as a “barricaded suspect.” That decision put a stop to efforts to enter the room and take down the shooter.

“I didn’t issue any orders,” Arredondo said. “I called for assistance and asked for an extraction tool to open the door.”

The question of who did give the stand-down or delay order looms large. Hyde said that Arredondo didn’t issue any order delaying entry, and, in the Tribune piece, appeared to question whether such a directive was even given.

That contradicts the New York Times, which reported that someone was issuing orders at the scene.

“People are going to ask why we’re taking so long,” a man who investigators believe to be Arredondo reportedly said, according to a transcript of police body camera footage. “We’re trying to preserve the rest of the life.”

“We Responded to the Information that We Had.”

After weeks of conflicting reports from law enforcement and government officials—and after reports that Arredondo’s department itself had stopped cooperating with the state’s investigation—Arredondo was relatively verbose in speaking with the Tribune.

“My mind was to get there as fast as possible, eliminate any threats, and protect the students and staff,” he said, insisting that he didn’t delay in responding to the emergency.

He similarly defended law enforcement on the scene.

“Not a single responding officer ever hesitated, even for a moment, to put themselves at risk to save the children,” Arredondo told the Tribune. “We responded to the information that we had and had to adjust to whatever we faced. Our objective was to save as many lives as we could, and the extraction of the students from the classrooms by all that were involved saved over 500 of our Uvalde students and teachers before we gained access to the shooter and eliminated the threat.”

Aside from his interview with the Tribune, at least for now, Arredondo isn’t offering any more public comments.

“Mr. Hyde’s client needs some time as this has been very difficult for him,” a representative from Hyde’s office said in an emailed statement. “At this point we will not be granting any interviews immediately.”

Other efforts are underway to get to the bottom of what happened at the school that tragic day. The U.S. Department of Justice has launched a “critical incident review” of law enforcement’s response, and the parents of at least four of the children injured in the shooting have filed a $100 million lawsuit against the shooter’s estate. Lawyers for the parents implied said that discovery would include a focus on law enforcement, and that other parties would be added to the lawsuit “if necessary.”

The Texas Department of Public Safety did not immediately respond to Law&Crime’s request for comment.