Trump Knocks Republicans Who Voted to Impeach and Remove Him: ‘Get Rid of Them All’ 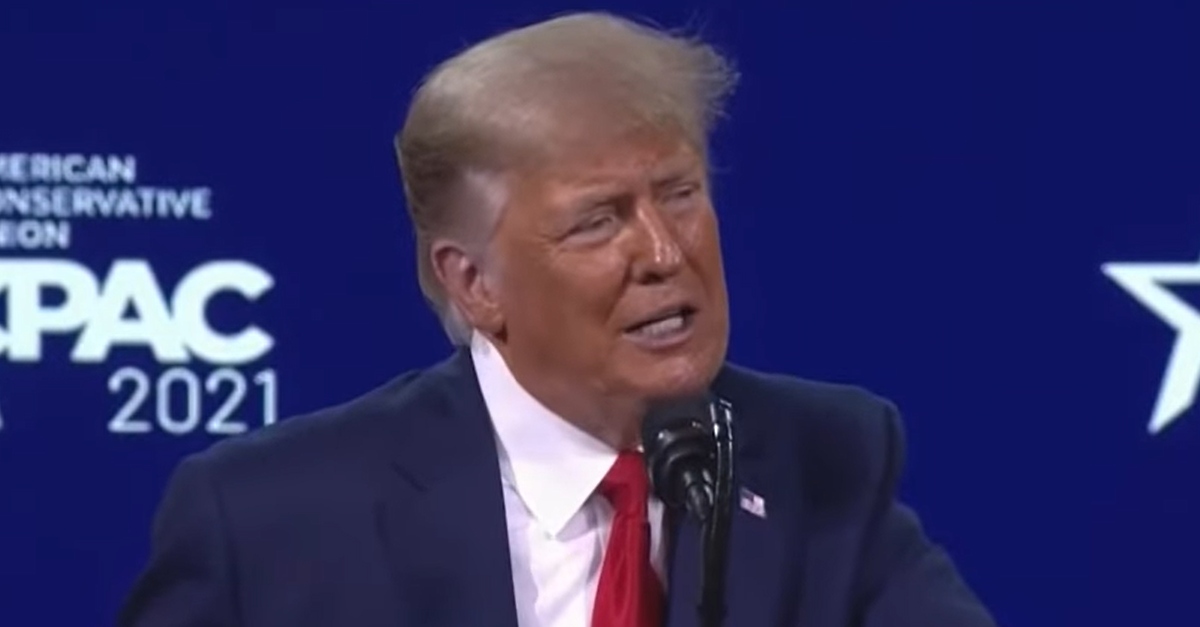 Former President Donald Trump on Sunday lashed out at the 10 Republican congresspeople who voted to impeach him, and the seven Senators who voted to remove him from office because he sparked the January 6 siege of the Capitol Building. He ran down the names of these “grandstanders” one by one, from Sen. Mitt Romey of Utah to “little” Sen. Ben Sasse of Nebraska to Rep. Anthony Gonzalez of Ohio (“that’s another beauty”), and to “warmonger” Rep. Liz Cheney of Wyoming.

Trump made a point of knocking Cheney because the Wyoming GOP censured her for her impeachment vote. He said her poll numbers dropped, and he hoped she would lose her next election. Then he expanded this wish to the other GOPers who voted against him.

“Get rid of them all,” he said in his speech at the Conservative Political Action Conference.

Motivated by Trump’s incessant lies that he actually won the 2020 presidential election, rioters raided the Capitol Building on January 6 in a bid to stop Congress from counting electoral college results weighing in favor of current President Joe Biden. They postponed but did not stop the process. Five people died in the chaos, however: four Trump supporters, and one Capitol officer. Another Capitol officer, a D.C. Metro officer, and a siege defendant died by suicide mere days after.

All this did not change Trump’s position on the election. If you were wondering what he was thinking after Twitter deleted his account, then check out the CPAC speech. It served as a greatest-hits of sorts. He repeated his lie that he actually won the 2020 presidential election, sharpened resentment against real and perceived enemies, and positioned “Americans” against Democrats, the media, and “radicals.”

“We need strong leadership,” he said in a knock toward so-called establishment Republicans. “We cannot have leaders who show more passion for condemning their fellow Americans than they have ever shown for standing up to Democrats, the media, and the radicals who want to turn America into a socialist country.”

In other news, he denied wanting to start a third-party, and said doing so would divide the vote.

Trump is eligible to run again for the 2024 election.

“Actually, as you know, they just lost the White House, but that’s one of those things,” he said. repeating his lie about widespread election fraud. “But who knows, who knows? I may even decide to beat them for a third time, okay?”