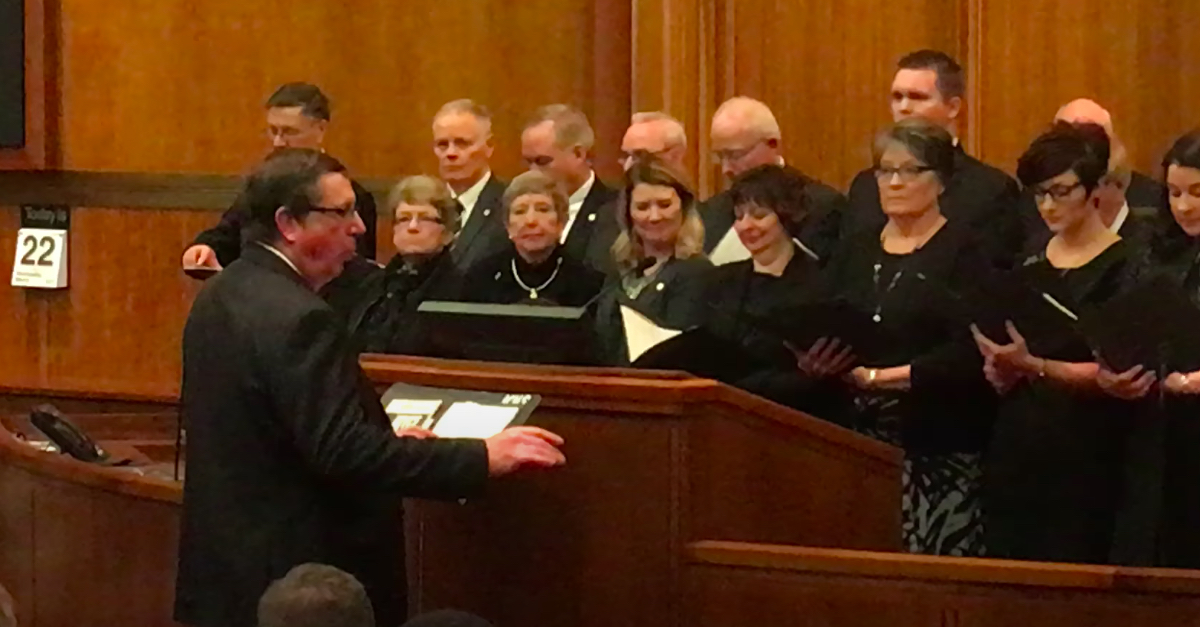 The North Dakota Senate this week passed a bill which aims to forbid election officials from disclosing how many actual votes are cast for each candidate in upcoming presidential elections.  The total tallies would only be disclosed after future Electoral Colleges convene to select an official victor.

The measure, Senate Bill 2271, was introduced by Sen. Robert Erbele, a Republican from Lehr, N.D., who represents a district situated southeast of Bismarck. It would withhold the state’s vote count from the public and allow officials to only reveal the percentage of the total vote each candidate receives.

The anti-transparency bill sailed through the legislature’s upper chamber with a 43-3 vote.  (Republicans dominate the 47-member North Dakota senate with a commanding 40-7 majority.)  The only testimony involving the bill thus far was favorable.

Democrats Joan Heckaman of New Rockford, Kathy Hogan of Fargo, and Tim Mathern of Fargo were the only three senators to vote against the proposed law. Sen. JoNell A. Bakke of Grand Forks, another Democrat, did not vote.

The bill is designed to prevent implementation of the national popular vote compact – a multi-state agreement aimed at circumventing the Electoral College.

“This Act becomes effective upon certification by the secretary of state to the legislative council of the adoption and enactment of substantially the same form of the national popular vote interstate compact has been adopted and enacted by a number of states cumulatively possessing a majority of the electoral college votes,” the bill states.

The national popular vote compact is a nascent agreement amongst a coalition of states which have enacted statutes dictating that their presidential electors only cast votes for the presidential candidate who wins the popular vote across all 50 states and the District of Columbia. The compact—which would effectively neuter the Electoral College—takes effect once the coalition of states involved possess 270 or more electoral votes. According to nationalpopularvote.com, the agreement has been passed into law in 16 states possessing a total 196 Electoral College votes, including New York, California, Illinois, Massachusetts, and New Jersey.

The popular vote compact is extremely unpopular with Republicans, who since 2000 have twice won the White House through the Electoral College via candidates who lost the national popular vote: George W. Bush in 2000 and Donald Trump in 2016.

Appearing on the political podcast Plain Talk, the former chairman of the Michigan Republican Party, Saul Anuzis, said the measure was “almost a politburo situation from Soviet Russia,” referring to the political policymaking committee in the former Soviet Union.

Read the full Senate bill below.