Mitch McConnell Is Having A Very, Very Bad Week 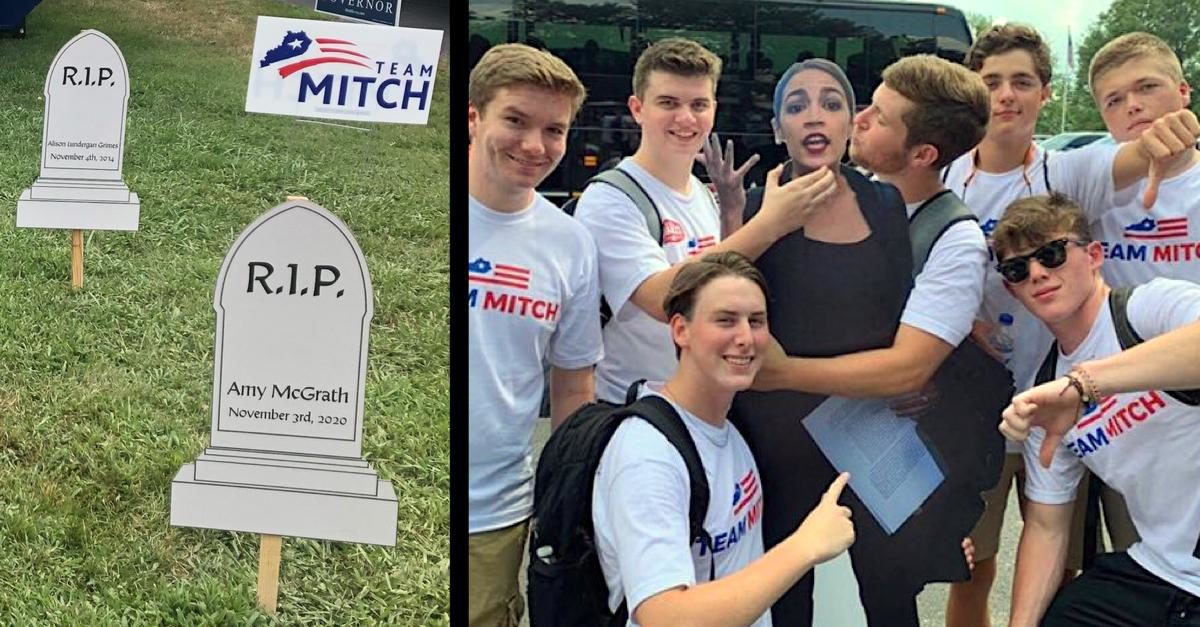 First, it was cardboard tombstones next to campaign signs, which McConnell’s campaign staff Tweeted out:

Political opponent Amy McGrath noticed her name on the signs.  Also listed were the names of Judge Merrick Garland, “Socialism,” and other alleged McConnell foes.

Hours after the El Paso shooting, Mitch McConnell proudly tweeted this photo. I find it so troubling that our politics have become so nasty and personal that the Senate Majority Leader thinks it's appropriate to use imagery of the death of a political opponent (me) as messaging. pic.twitter.com/2x5kO5jwPi

McGrath raised questions about the appropriateness of the display given mass shootings happening on the same weekend these erect “tombstones” were staked into the ground.

Then, New York Congresswoman Alexandria Ocasio-Cortez raised concerns about what appear to be members of McConnell’s team groping and making out with a cardboard cutout of herself:

Pictured: seven young white men in “Team Mitch” T-shirts, gathered round a distressed looking cardboard @AOC, groping and kissing her. The caption, “break me off a piece of that.”

The reaction from AOC went like this: “Hey [McConnell], these young men look like they work for you. Just wanted to clarify: are you paying for young men to practice groping & choking members of Congress w/ your payroll, or is this just the standard culture of #TeamMitch? Thanks.”

Hey @senatemajldr – these young men look like they work for you.

Just wanted to clarify: are you paying for young men to practice groping & choking members of Congress w/ your payroll, or is this just the standard culture of #TeamMitch?

Meanwhile, senate staffer Tweeted that protesters outside McConnell’s personal home said someone should “stab the motherf—er in the heart,” a Fact Fox News was quick to report.

A woman is on Facebook Live, outside of Senator McConnell’s home in Louisville, saying she hopes someone “just stabs the mother f*cker in the heart, please.” #KYSen pic.twitter.com/sHaPWqn32J

Add all this to the fact that McConnell is home recovering from a fall which left him with a fractured shoulder.