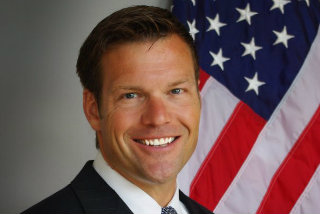 Kansas Secretary of State Kris Kobach made his plans for a potential role in Donald Trump’s presidential administration quite clear to the general public on Monday morning. The question is if he meant to do so. As Kobach posed with Trump for photographs, he had a ledger in his hand with some papers stacked on top of it. The Topeka Capital-Journal was one of the news outlets covering the meeting, and after the photo was taken, they noticed that if zoomed in, the top page was legible. The topic? Kobach’s plans for the Department of Homeland Security to reinstitute a program that has been compared to Trump’s proposal of a Muslim registry.

The photo showed the first two agenda items, which read as follows:

1. Update and reintroduce the NSEERS screening and tracking system (National Security Entry-Exit Registration System) that was in place from 2002-2005. All aliens from high-risk areas are tracked.

Kobach, who appears to be in line for running the Department of Homeland Security, developed the NSEERS program while working the George W. Bush era Department of Justice. Under NSEERS, men from 25 different countries (mostly with Muslim majorities) had to register upon entering the United States, complete with giving fingerprints and being subject to an interview. Some men already in the country on visas from other countries had to register, as well.  It was eventually discontinued in 2011 and is generally considered a failed program.