Will Washington D.C. Become a State? 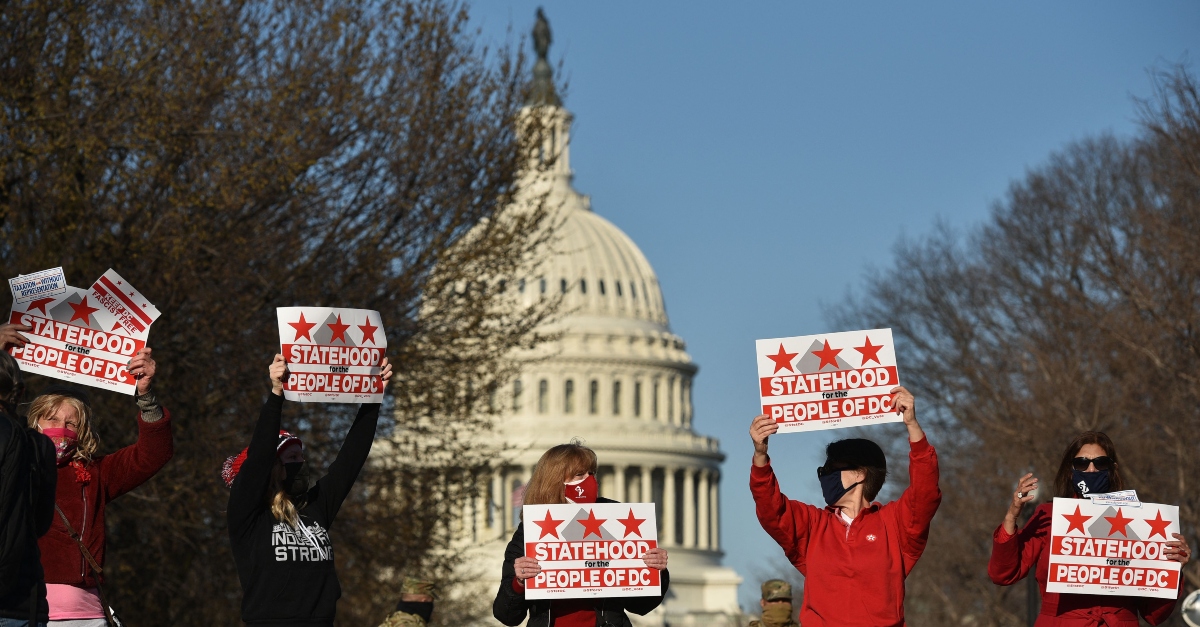 At a U.S. House of Representatives hearing on March 22, the ACLU filed testimony contending that Congress, with presidential approval, could alone establish the District of Columbia as the country’s 51st state. At the same hearing, The Heritage Foundation, a conservative group, took a differing view, saying that making D.C. a new state would require constitutional changes.

With the Democrats in control of Congress and the White House, advocates believe D.C. statehood has the best chance of passing in decades. But who is right? Does D.C. statehood require the more difficult path of amending the U.S. Constitution?

The Constitution grants Congress in Article IV, Section 3, the power to create a new state with some limitations. For instance, this article, which is also known as the Admissions Clause and is based on James Madison’s Federalist Paper 43, specifies that a new state cannot be formed within the jurisdiction of another without consent of the legislatures of both as well as Congress. Historically, Congress has created new states based on majority vote and the signature of the president.

Since 1789 and the original 13 colonies, the 37 additional states have joined the union in various ways. The usual process has been for Congress to grant territorial status first. The territory then drafts a local constitution by a specially elected convention that conforms to the federal Constitution. In other cases, such as Texas, West Virginia, Vermont and Kentucky, the admission process differed. The last states to be admitted were Alaska and Hawaii in 1959. The Constitution does not require a constitutional amendment to admit a new state.

However, the land area that is now the District of Columbia is separately addressed in the Constitution. When ratified in 1788, the U.S. Constitution called for the creation of a federal enclave to serve as the permanent seat of the new national government. It also gave Congress legislative authority over the new territory that constitutionally was to be no more than 10 miles square. The new capital was subsequently carved out from the original states of Maryland and Virginia.

During the ensuing years, Congress returned to Virginia its prior territory, and also initiated the 23rd Amendment, which was ratified by the necessary two-thirds of the states in 1961 giving District voters three electoral votes for president. In 1970, Congress approved a non-voting D.C. delegate in the House, but the approximate 712,000 District residents, who pay federal taxes, still have no voting representation in Congress.

On April 22, by a 216-208 vote along party lines, the House approved D.C. statehood legislation pushed since 1991 by longtime D.C. Delegate Eleanor Holmes Norton, a Democrat. Known as H.R. 51, the bill would create the state of Washington, Douglass Commonwealth, honoring abolitionist Frederick Douglass. It would also carve out a small enclave of federal buildings, which would include the White House, to serve as the “seat of government.” The White House says President Joe Biden supports the effort.

Last year, similar legislation died in the Republican-controlled Senate. While prospects for passage have improved somewhat this year, D.C. statehood still faces political uncertainty. Support of all 50 Democratic senators is not assured. The bill could also require as many as 60 Senate votes if Republicans, as expected, mount a filibuster.

Even if filibuster rules are changed and a D.C. statehood package emerges, the new law would likely encounter formidable legal and constitutional challenges.

Opponents of the legislation cite several constitutional issues, the most serious of which is the 23rd Amendment, which in theory would have to be repealed prior to or simultaneously with the District becoming a state. The House bill merely provides for an expedited consideration of a joint resolution repealing the amendment, which would then require ratification by the legislatures of 38 states. Another objection is that D.C.’s proposed constitution was written by a panel of lawyers and not a specially elected convention as has been the traditional route for statehood although it is unclear if the Constitution requires it.

Several years ago, the Senate historian estimated that approximately 11,699 amendment changes have been proposed in Congress, but only once has a constitutional amendment been repealed. In 1933, Utah ratified the 21st Amendment, which not only repealed the broad prohibition on alcohol in the 18th Amendment but added language to the Constitution that states had the ability to define alcohol laws within their borders.

A Congressional Research Service (CRS) expert said in House testimony earlier this year that whether Congress can create a state from the District of Columbia raises novel constitutional questions, adding there is little case law directly on point. Those questions include whether the U.S. Constitution actually gives Congress the authority to create a new state out of the District itself, and whether the 23rd Amendment, unless repealed, would leave the handful of residents of the new Capital area, primarily the occupants of the White House, three electoral votes.

As the March testimony of the ACLU and The Heritage Foundation suggests, passage of the D.C. statehood bill, particularly without repeal of the 23rd Amendment, raises unique legal issues. Ultimately, it likely would fall to the U.S. Supreme Court to sort through the constitutional issues and determine whether D.C. statehood, for instance, requires a constitutional amendment and what would be the consequence for the 23rd Amendment.