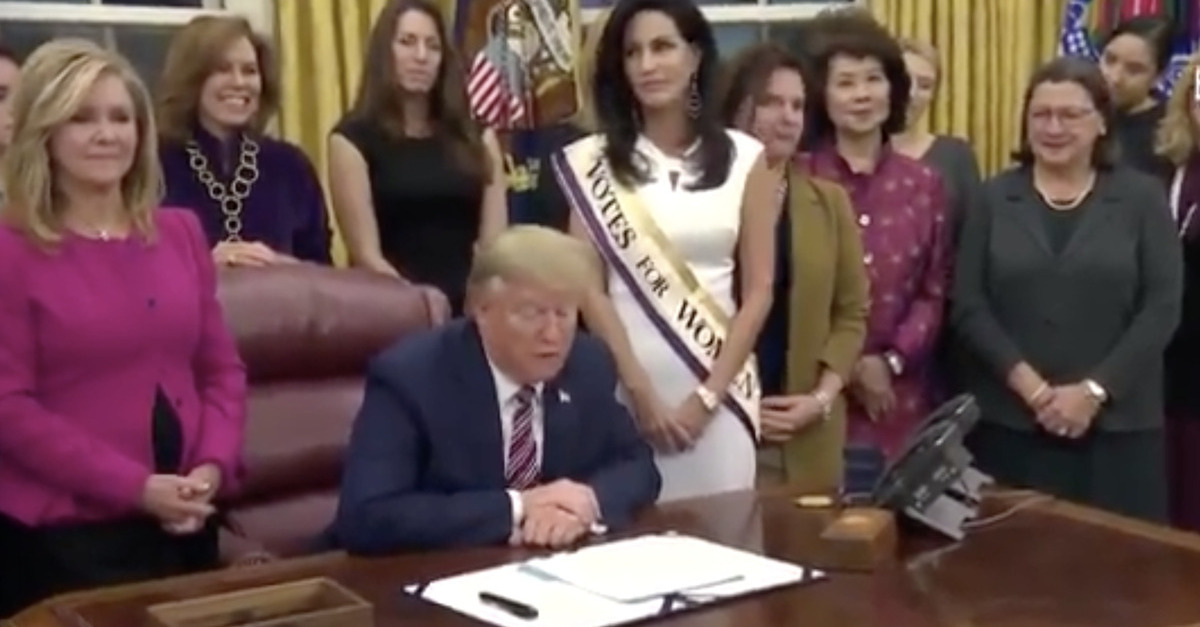 Know how Trump-lovers are always whining about how the president never gets any media credit for the good stuff he accomplishes? Well, here I am, reporting that our president signed the Women’s Suffrage Centennial Commemorative Coin Act. POTUS signed the bill into law Monday night; it directs the Department of the Treasury to mint and issue up to 400,000 one-dollar silver coins “that are emblematic of the women who played a vital role in rallying support for the 19th Amendment to the U.S. Constitution.” The coins will be sold from January 1 until December 31, 2020, and any revenue received through surcharges will be paid to the American Women’s History Initiative of the Smithsonian Institution. So that’s nice, I guess.

As he signed the bill, President Donald Trump gave himself a characteristic back-pat, musing, “I’m curious why wasn’t it done a long time ago? And also, I guess the answer to that is because now I’m president, we get things done.”

President Trump signed the Women’s Suffrage Centennial Commemorative Coin Act! @USTreasury will issue $1 coins commemorating the ratification of the 19th Amendment, to honor the history of the women’s suffrage movement and celebrate the heroes who fought for the right to vote! pic.twitter.com/lkfTOTMhHa

Apparently, neither the president nor anyone on his communications team realized that rather than casting Trump as the feminist hero he imagines himself to be, the video actually shows the president struggling to understanding how time works. The Nineteenth Amendment – the one that gave women the right to vote – was ratified in 1920. A “centennial” is a marker of 100 years. That would make 2020 the centennial of women’s suffrage, and I literally can’t believe this is something I need to explain to a sitting U.S. president.

The bill, which garnered bipartisan support, had been initially introduced by Rep. Elise Stefanik (R-NY), who you may remember from her recently failed efforts in following rules during impeachment proceedings.

Much as we all love a commemorative coin, it’s hard to get really excited about this particular gesture. If either the president or Ms. Stefanik would like to take some public action that supports women’s rights, I’d like to cordially invite them to pay some attention to the Equal Rights Amendment. That sucker will have been around for a century in 2023. Maybe by then, Trump will understand what “centennial” means.