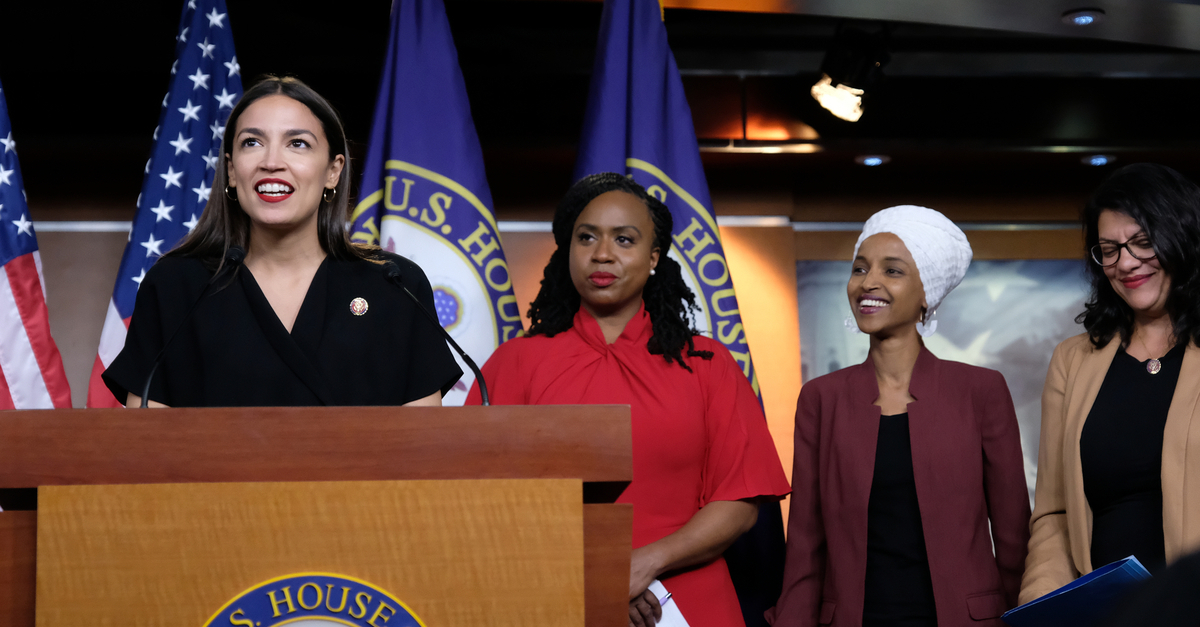 The cable pundits are abuzz today over a tidbit of employment law that’s disturbingly relevant to the American president’s remarks to sitting members of Congress. ABC News published a story in which Eric Bachman, a former Department of Justice Civil Rights Division prosecutor specializing in anti-discrimination cases, said that under the Civil Rights Act, the content of Trump’s tweets to  would constitute, “as close to a slam-dunk discriminatory claim as you can get,” had it been uttered by an employer in the workplace.

The EEOC cites “go back to where you came from” as a classic form of discrimination that violates civil rights. The President’s bigoted words are so contrary to who we are as a country that we literally have laws against them. pic.twitter.com/FcD1TcKcKE

“Examples of potentially unlawful conduct include insults, taunting, or ethnic epithets, such as making fun of a person’s foreign accent or comments like, ‘Go back to where you came from.’” From the EEOC handbook on employment discrimination. Oh well. https://t.co/fkgEwJwIfi

Mr. Bachman’s statement is correct, but it only tells part of the story. The Equal Employment Opportunity Commission (EEOC) (the federal agency tasked with ensuring non-discriminatory employment practices) has indeed issued guidelines that specifically lists the statement, “go back to where you came from,” as an example of an ethnic epithet.

Harassment Based on National Origin

Ethnic slurs and other verbal or physical conduct because of nationality are illegal if they are severe or pervasive and create an intimidating, hostile or offensive working environment, interfere with work performance, or negatively affect job opportunities. Examples of potentially unlawful conduct include insults, taunting, or ethnic epithets, such as making fun of a person’s foreign accent or comments like, “Go back to where you came from, ” whether made by supervisors or by co-workers.

Whether or not one thinks Trump is a malignant racist, one thing is for sure: telling Reps. Alexandria Ocasio-Cortez, Ayanna Pressley, Ilhan Omar, and Rashida Tlaib (or anyone else, for that matter) to, “go back where they came from,” is obnoxious and hateful. Of course the statement is an ethnic epithet. I don’t think there’s anyone who heard Trump’s comments and rationally determined them to be anything but racist sentiments. But we hardly needed the EEOC guidelines to tell us that.

But is it really true, as the title  the ABC story claims, that the U.S. government “routinely sues companies for language that mirrors Trump’s racist ‘go back’ tweets”?  Does the federal government act as a kind of racism task force in the workplace, starting lawsuits every time a racist makes himself known? Not quite.

The EEOC doesn’t police individual remarks. Rather, it assesses pervasive workplace hostility; the EEOC gets involved when an entire environment may be discriminatory — not when one person makes one racist comment. A remark – whether made in passing or in a social media post – may certainly be evidence of an intolerant environment, but is not usually dispositive on its own.

I know. It sounds like I’m splitting hairs here. But such is the nature of analyzing the law of free speech. Content matters.  But so does context. President Trump is not AOC’s supervisor. Twitter is not AOC’s workplace. The Congresswomen have not suffered adverse employment consequences at Trump’s hands (in fact, they’ve likely become more popular than ever).  But while we know that racist language is generally on-brand for our president, there’s no real evidence (at least that’s been publicized) that the tweet was more than a one-time barb. Despicable, yes. Discriminatory, probably not.

Law & Crime discussed the comparison to EEOC guidelines with employment expert and attorney William Healey of Kluger Healey, PC, who explained, “while there is little doubt that saying ‘go back to where you came from,’ if made by a supervisor in a workplace, would be valuable evidence that could contribute to a finding of a Title VII violation, I would not conclude that the President, as to the four Congresswomen, has violated Title VII by that statement alone.” Mr. Healey continued to explain how the analysis is more complicated than a quick conclusion that the EEOC prohibits people from doing exactly what the president did:

A threshold – and difficult  – issue is whether the President’s remarks were made in a workplace.  The Congresswomen,  as federal employees, would surely argue that the President is their ultimate supervisor and, as such, that his remarks can only be viewed as sufficiently workplace-related.   On the other hand, as members of a co-equal branch of government, and where the President surely does not have supervisory authority over the Congresswomen, it is very difficult to see how the remarks would be within the EEOC’s ambit. Moreover, even if it can somehow be shown that “go back to where you came from” was a workplace comment, and therefore fodder for an EEOC violation, unless more evidence of racial/ethnic animus from the President can be adduced (which may be possible), it would seem unlikely that the Congresswomen – who have no suffered any adverse employment action – can demonstrate that what they experienced to date is sufficiently severe and pervasive to state a claim under Title VII.

None of this is to defend or excuse President Trump’s remarks toward Reps. Ocasio-Cortez, Pressley, Omar, and Tlaib. The tweets speak for themselves, and leave the public to draw obvious conclusions about our president and his propensity to spread xenophobia.  Still, reactive hyperbole and misplaced outrage is anything but the high road. “Discrimination” isn’t synonymous with “racism.” Given that our president can’t seen to get the legalities of speech right, it’s incumbent on the rest of us to do so.Frankly, we don’t need to pile on the legal analysis: racism is detestable all on its own without it needing to constitute a legal wrong.