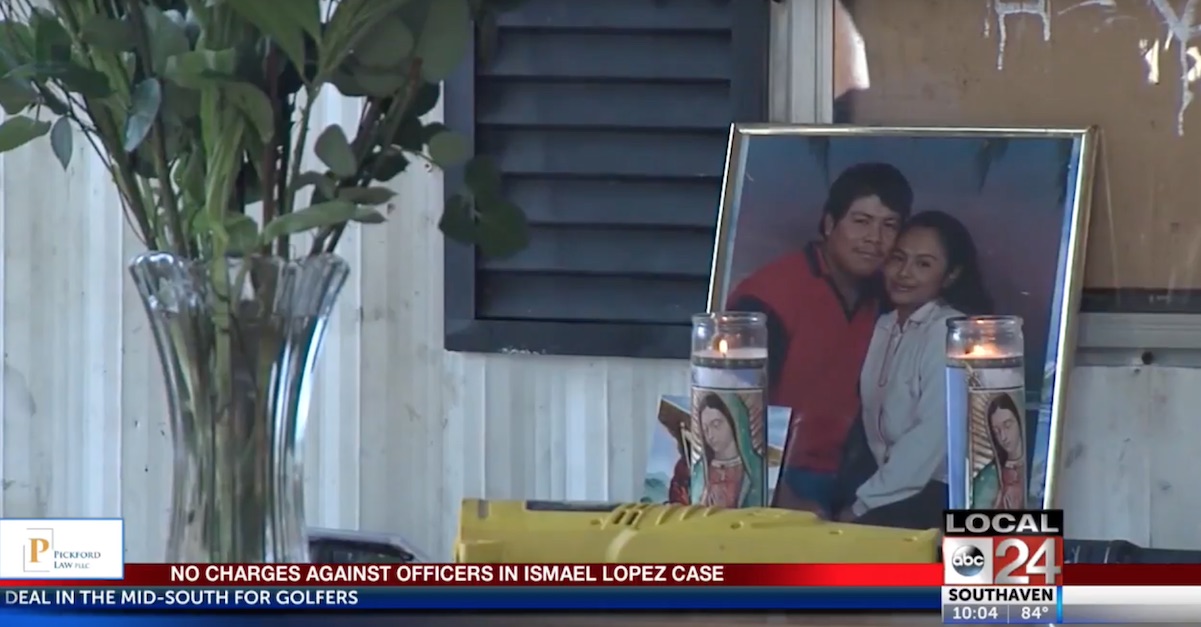 Mississippi just added travesty to tragedy in a case involving the police shooting of an undocumented immigrant. In an unprecedented and audacious argument, lawyers for the city of Southaven have argued that the Constitution’s guarantees of life and liberty only apply to American citizens.

In July 2017, police officers in Southaven, Mississippi went to the wrong house while serving a warrant. They’d been trying to collect Samuel Pearman, a man wanted for alleged domestic assault; instead, cops arrived at the wrong house, where Ismael Lopez and his wife, Claudia Linares, were asleep in bed. Accounts differ as to whether police shouted at Lopez, who answered the door holding a gun. Police then shot and killed Lopez.

Following Lopez’s death, a grand jury declined to indict officers Zachary Durden and Samuel Maze. It was Durden who fired the fatal shot, and he is no longer on the force. Lopez’s family is now suing the city of Southaven, the Southaven Police Department, and the individual officers for $20 million for the wrongful death and violation of Lopez’s constitutional rights.

If you’re outraged that police could be so careless as to execute a warrant at the wrong address and follow up by killing someone wholly unrelated to their case, hold on tight. The city’s defense is about to make your head spin.

Southhaven filed a brief in support of its motion to dismiss the case against it, arguing that Ismael Lopez had no constitutional rights on which to base the lawsuit. While an American citizen might have had a legal right not to be killed by police, Ismael Lopez –an immigrant here unlawfully– simply didn’t.

Yes, the city actually said this. Here’s an excerpt from the brief:

Any Fourth Amendment civil rights that Ismael Lopez even arguably could have gained upon entry to the United States never came to fruition or were lost by virtue of his own acts and omissions.

In fact, they went a bit further – and clarified that Lopez wasn’t really a “person” for constitutional purposes:

Ismael Lopez may have been a person on American soil but he was not one of the “We, the People of the United States” entitled to the civil rights invoked in this lawsuit. The Fourth Amendment explicitly states that it’s [sic] coverage extends to the “right of the people.” This refers to members of the polity of the United States.

Wow. Denying personhood is pretty ballsy, especially for a bunch of litigators who can’t even figure out the proper use of apostrophes.

If you’re thinking that Southaven’s argument couldn’t possibly be accurate, you’re right. We do not live in a country wherein cops are perfectly welcome to search, seize, and shoot anyone who’s not an American citizen. For sure, the limits and meaning of constitutional protections can be complex – especially within the context of undocumented immigrants at the border, or American governmental action taken outside U.S. borders. But this case wasn’t a close call. This was a man — who lived and worked in Mississippi for years — shot dead at his home by police officers who shouldn’t have been there.

Southaven’s lawyers might want to brush up on some high school civics lessons. Fundamentally, the Constitution is a document that limits the powers of the federal government; it functions as a list of things the government can’t do. Most of what’s guaranteed in there – like freedoms of speech and religion, due process, equal protection – are promised to all people, on the basis of simply being in our country. The rules don’t differ based on who wishes to assert the right – which is why the Constitution uses the words, “people” or “person,” as opposed to “citizen” in most instances.

Sure, situations do arise during which we might need to differentiate certain immigrants from citizens; what legal processes are “due” in certain circumstances, for example, might differ depending on the individual. But whether police are constitutionally entitled to deprive a person of life isn’t a one of those situations. The rules for something so basic are the same whether we’re talking about a Mayflower descendant or a person who arrived here illegally an hour ago.

Southaven’s appalling argument didn’t go unnoticed. Many around the country are raising the case to the national stage as a warning of a disturbingly growing mindset.

Holy $hit this is horrifying. Apparently Miss. thinks it’s totally okay to shoot people if they aren’t US citizens.

Sweet Moses. Last year, cops in Miss. went to the wrong address, then shot and killed an innocent man in his own home. His family sued. The city claims his family has no standing, because as an undocumented immigrant, **he had no constitutional rights.** https://t.co/Nk7XQz7IKp

At a press conference, lawyers for the Lopez family called Southaven’s argument “absolutely chilling,” “not founded in any real law,” and demonstrative of “flagrant disrespect for the Supreme Court and the Constitution of the United States.”