Will Erik Prince Be Prosecuted for Perjury? | Law & Crime
Opinion 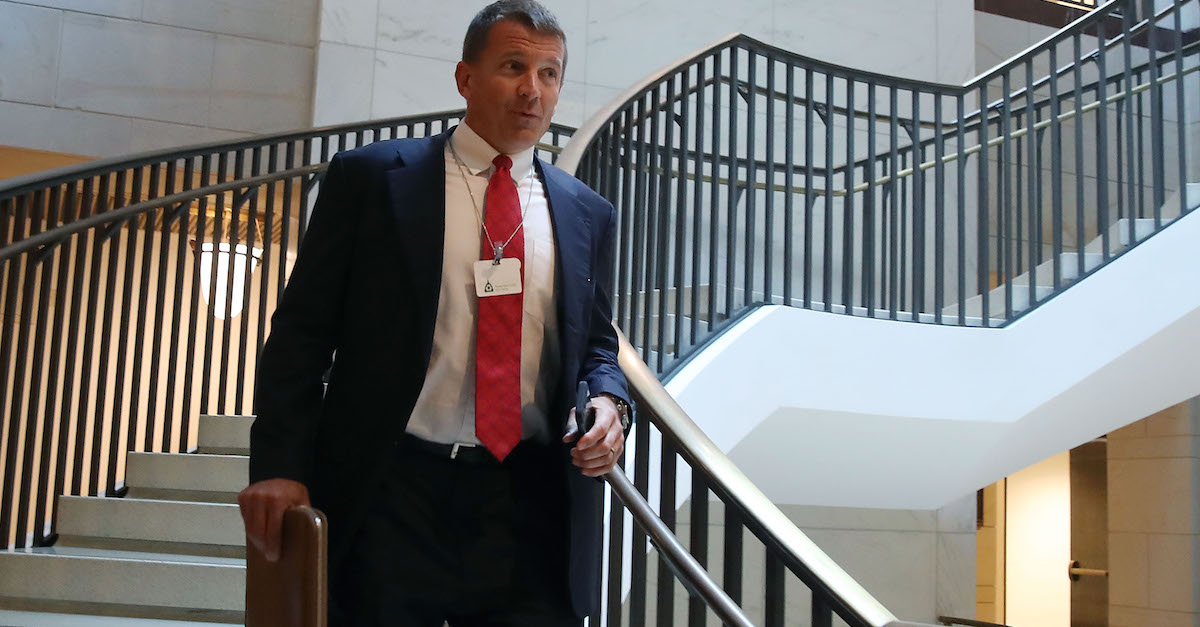 When last we left Erik Prince, we were talking proctology and wondering why he didn’t just give his sister (Education Secretary Betsy DeVos) some free bodyguards.

Now, though, things are looking pretty bad for the former Navy SEAL and founder of Blackwater security firm. In January, we learned that Prince was questioned by special counsel Robert Mueller about a secret meeting Prince had with Kirill Dmitriev, a Russian financier close to Vladimir Putin. According to reports, the House Intelligence Committee is about to make a criminal referral to the Justice Department alleging that Prince lied to Congress about that meeting.

According to Prince, the meeting which took place in the Seychelles islands nine days prior to Donald Trump’s inauguration was merely a chance encounter, and was wholly unrelated to the incoming Trump administration. Prince’s account had been wildly at odds with speculation by congressional officials who suspected that Prince had attended to explore setting up secret communications between the Trump administration and Russia. Now, it appears that Prince’s “nothing to see here, folks” statement wasn’t exactly accurate.

As he announced his plan to send the a referral to the DOJ, Rep. Adam Schiff (D-Calif.) remarked that “the evidence is so weighty that the Justice Department needs to consider this,” but added that the decision about whether it is appropriate to prosecute Prince is within the DOJ’s discretion. There seems to be a pretty clear problem for Prince: what he told Congress is not what Mueller found. Schiff said:

We know from the Mueller report not that that was not a chance meeting.

Adam Schiff says at WaPo event that he is sending a criminal referral to the Justice Department today for Erik Prince, saying there‘s “very strong evidence” Prince “willingly” misled the House Intelligence Committee when he testified in 2017.

The  Mueller Report contains a section titled, “Erik Prince and Kirill Dmitriev meet in the Seychelles,” which details a trip in which George Nader and Erik Prince met in January 2017 to discuss Dmitriev. According to the report:

Nader informed Prince that the Russias were looking to build a link with the incoming Trump Administration…he told Prince that Dmitriev had been pushing Nader to introduce him to someone from the incoming Administration… Nader suggested, in light of Prince’s relationship with Transition Team officials, that Prince and Dmitriev meet to discuss issues of mutual concern.

Nader then reportedly shared electronic bios with Prince and Dmitriev about one another, and when Dmitriev initially hesitated to meet with Prince, Nader assured Dmitriev:

This guy [Prince] is designated by Steve [Bannon] to meet you! I know him and he is very well connected and trusted by the New Team. His sister is now a Minister of Education.

Now seems like a good time to talk perjury.

Basically, these sections mean that when a person provides sworn statements, he or she cannot legally tell any purposeful lies about pertinent information.

I think it’s safe to say that Congress constitutes a “competent tribunal” and that the subject – meetings about secret Russian communications – definitely counts as “any material matter” in the context of the Mueller investigation. All that’s left is to examine is Prince’s belief. In many perjury cases, a discrepancy between an accused’s perception of particular information and the actual truth behind that information is key.

Witnesses aren’t expected to be perfect – they’re just expected to be honest. If Prince can come up with some believable explanation for why he claimed to lack advance knowledge about the Seychelles meeting when the report found otherwise– such as the discrepancy was product of faulty memory, lack of knowledge, mistake, or even some kind of psychological break from reality– then he might be able to dodge a perjury charge. Right now, though, it’s not looking good for him.