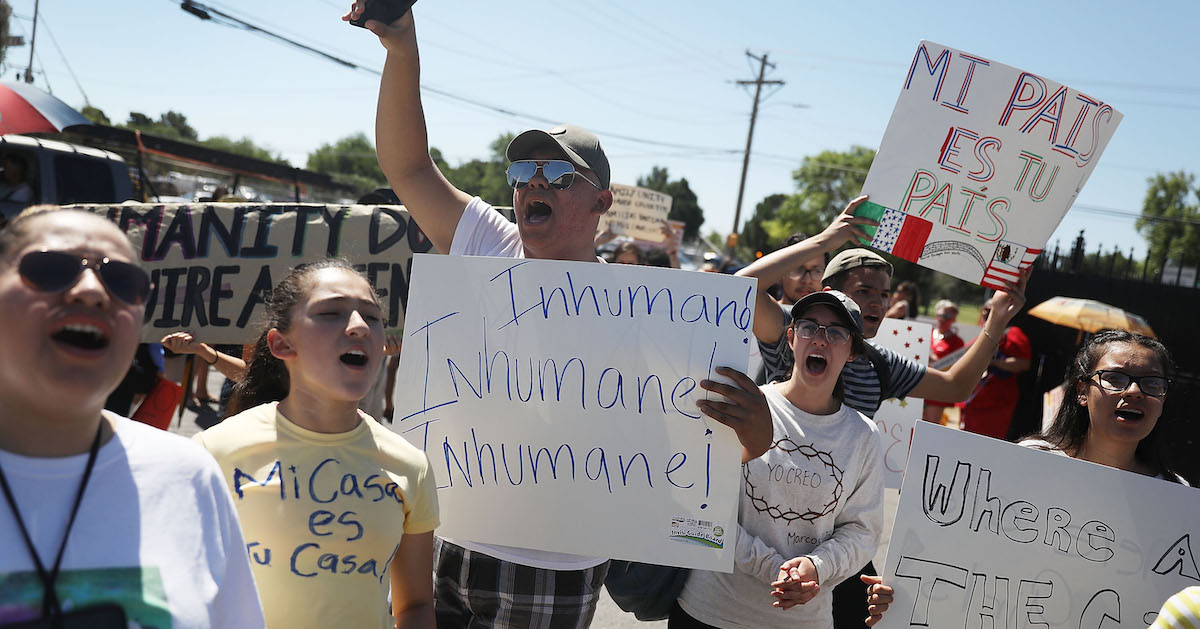 EL PASO, TX – JUNE 19: People protest the separation of children from their parents in front of the El Paso Processing Center, an immigration detention facility, at the Mexican border on June 19, 2018 in El Paso, Texas. The separations have received intense scrutiny as the Trump administration institutes a zero tolerance policy on illegal immigration.

The legal community has its briefs in a bunch over a New York Times op-ed written by assistant human rights professor Dr. Kate Cronin-Furman. In it, Cronin-Furman argues that the treatment of migrants in detention centers is so deplorable that it meets the definition of a “mass atrocity.” Accordingly, those involved at every level must be held accountable if we are to end this “dehumanizing treatment of defenseless children.”

Cronin-Furman is a lawyer and political scientist who writes often about mass atrocities and human rights. She is currently a postdoctoral fellow in the International Security Program at the Harvard Kennedy School’s Belfer Center for Science and International Affairs.  For those who have studied the history of genocides and other mass atrocities, some of her central premises aren’t all that radical:

Testimony from trials and truth commissions has revealed that many atrocity perpetrators think of what they’re doing as they would think of any other day job.

Cronin-Furman’s bold suggestion is that the people who run systems of atrocities may respond to public shaming and damage to personal reputation so profoundly as to topple these very systems.

The midlevel functionaries who make the system run are not as visibly involved in the “dirty work,” but there are still clear potential reputational consequences that could change their incentives.

The professor’s boldness peaks at one particular suggestion: go after the lawyers:

The lawyer who stood up in court [she’s referring to Sarah Fabian] to try to parse the meaning of “safe and sanitary” conditions — suggesting that this requirement might not include toothbrushes and soap for the children in border patrol custody if they were there for a “shorter term” stay — passed an ethics exam to be admitted to the bar. Similar to the way the American Medical Association has made it clear that its members must not participate in torture, the American Bar Association should signal that anyone who defends the border patrol’s mistreatment of children will not be considered a member in good standing of the legal profession. This will deter the participation of some, if only out of concern over their future career prospects.

NYT drew special attention in a tweet to the call for the ABA to get involved:

The American Bar Association should signal that anyone who defends the border patrol’s mistreatment of children will not be considered a member in good standing of the legal profession https://t.co/FbM0tGuOGV pic.twitter.com/CZSj4WrOAe

Like ethics canons that would prevent a doctor from engaging in torture, so should lawyers be prevented from defending abhorrent actions of others. Thus, Cronin-Forman argued that “the American Bar Association should signal that anyone who defends the border patrol’s mistreatment of children will not be considered a member in good standing of the legal profession.”

Let’s be clear: this suggestion is nothing short of radical. Lawyers make arguments for undeserving clients every day. Everyone from war criminals to domestic abusers, serial killers to child rapists is entitled to an advocate. It’s difficult work, but making arguments for those who least deserve them is the job. The inherent division between the ethics underlying a person’s conduct and those underlying the attorney advocating for him is the cornerstone of American advocacy. Simply put, this is just the way it works.

The legal community, of course, knows that, and freaked out accordingly:

If I’m reading this professor’s argument correctly, attorneys who take certain positions in litigation should be kicked out of the legal profession.  (I assume that we can get a list of the career-ending positions by consulting the professor.) https://t.co/EFtJl5TM7v pic.twitter.com/qSYFUGEL82

This is absolutely wrong. Everyone, even the worst people in society, have the right to secure legal counsel and to receive effective representation from that counsel. Even a mass murderer has that right.

There is nothing wrong with a lawyer repping border patrol officials. https://t.co/9MubbP0Q3r

As Cronin-Furman surely knows, the ABA Model Rules of Professional Conduct have already spoken about the ethics involved with advocating for a client:

A lawyer’s representation of a client, including representation by appointment, does not constitute an endorsement of the client’s political, economic, social or moral views or activities.

Eroding these principles would certainly threaten all lawyer-client relationships for all time to come; when lawyers are prevented from representing a client who is unethical, the American legal system will all but shut down. Cronin-Furman did not address the possible consequences of this erosion; instead, she conflated the ABA’s shunning of lawyers with other suggestions – such as limiting international travel for those running detention centers, or boycotting companies who provide products for the centers.

Many Americans have been asking each other “But what can we DO?” The answer is that we call these abuses mass atrocities and use the tool kit this label offers us to fight them.

The suggestion that it’s time to take up a radical fight against a “mass atrocity” isn’t made in a vacuum. Nothing else has worked, argues Cronin-Furman—and this is an emergency:

So far, mobilization against what’s happening on the border has mostly followed standard political activism scripts: raising public awareness, organizing protests, phoning our congressional representatives. These efforts are critical, but they aren’t enough. Children are suffering and dying. The fastest way to stop it is to make sure everyone who is responsible faces consequences.

As much as many of us (especially those in the legal community) can get behind the idea of desperate times calling for bold measures, it’s likely best that we the advocates are left out of it. Boycotts, activism – even the name-and-shame of Border Patrol Cronin-Furman suggests – fail to risk the same systemic consequences that shunning lawyers with terrible clients would create. Still, it’s tough to disagree with this writer’s argument on a more basic level: Donald Trump is not the only person who bears responsibility for conditions in detention centers. Those with involvement at all levels might be examined and held accountable for their part in maintaining any system that deprives human rights. All good thoughts. Let’s maybe just leave the lawyers out of it for now.