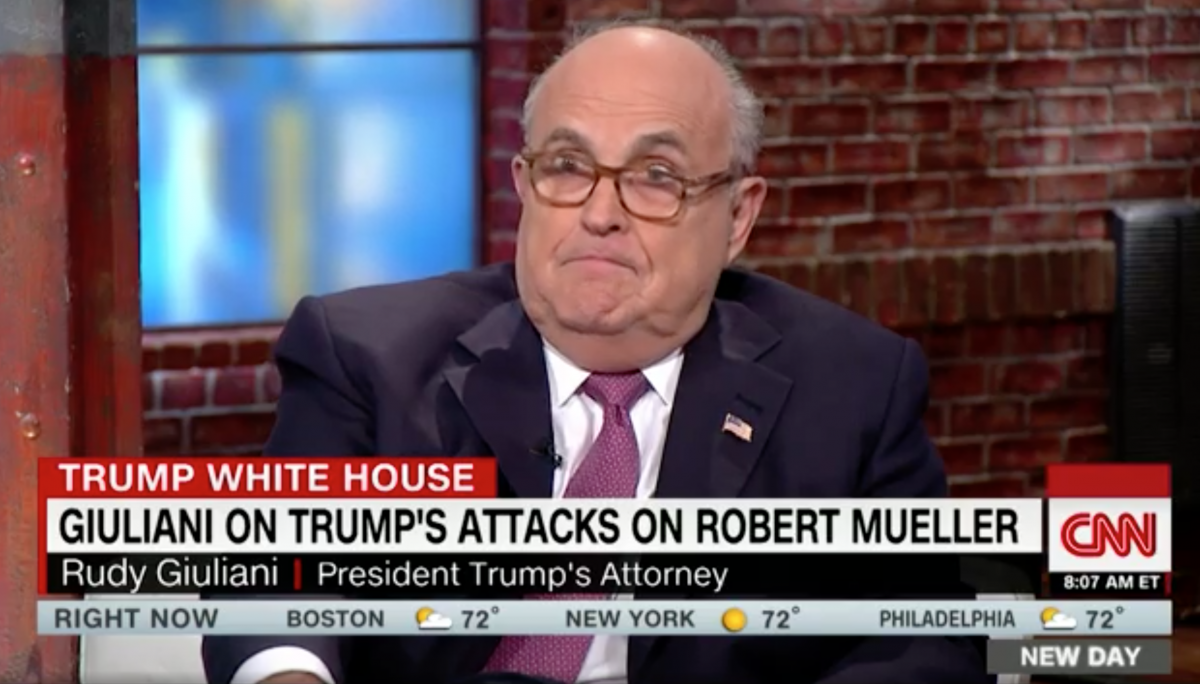 Call me an eternal optimist, but I swear, I continue to hold out hope that Rudy Giuliani remembers something about his days as a federal prosecutor. But his public comments continue to sound like the infantile whining of someone with no relevant legal experience.  On Monday, Giuliani went on something of a tirade against “Bob” Mueller, Mueller’s alleged (though unnamed) conflicts of interest, and the “scoundrels” hired to be part of the Trump investigatory team. One of Giuliani’s chief complaints was that Mueller’s team doesn’t seem to be acting with sufficient alacrity with respect to negotiations over a possible interview of Donald Trump.

The hypothetical interview we’re talking about is the same one we discussed back in March when Trump’s legal team reportedly attempted to extract some kind of promise from Mueller in exchange for Trump submitting to the conversation. It’s also the same one that Trump said many times that he’d be happy to do. And of course, it’s also the one that isn’t likely to be particularly valuable to Mueller’s investigation given the multitude of other sources of evidence for proving any Trump wrongdoing. Despite both the particulars of this interview, as well as the basic principle that prosecutors owe exactly zero duty of promptness to folks they’re investigating, Giuliani is here to express (or at least feign) outrage on behalf of his client.

He explained when he had been discussing the scope of the interview; President Trump would only agree to answer questions about Russian collusion, but none about obstruction of justice. “They haven’t gotten back to us in 10 days over our recommendation of how to do an interview,” Giuliani lamented to CNN’s Alisyn Camerota. “I’m sure they are in bad faith about an interview at this point.”

Giuliani’s accusation – that prosecutors are acting in bad faith because they haven’t responded promptly to his recommendation demand to limit the scope of the president’s interview – would be arrogant coming from any defense lawyer in his position.  “Bad faith” is a legal term used to describe negotiations in which one party has acted intentionally to deceive the other. Here’s a totally hypothetical example of what “bad faith” might mean: if Giuliani had negotiated details of an interview between his client and Mueller, knowing that Trump was ultimately planning to refuse the interview entirely, such a negotiation could be said to have been done, “in bad faith.”

Mueller’s team’s big faux pas? They didn’t keep to Giuliani’s timeline. I know it’s been a while since Giuliani’s days in the S.D.N.Y., but I’m sure he remembers that when he was a U.S. Attorney, he was in charge of his investigations. I can imagine a 1980s-Giuliani getting a good laugh out of some mafia defense lawyer accusing him of “bad faith” for failing to return their phone calls quickly enough.

If Rudy would like to throw around legal terms, I’ve got one to suggest. When one experienced prosecutor publicly accuses another of misconduct for doing something that is neither improper nor uncommon, we might label it an action of “willful blindness.”