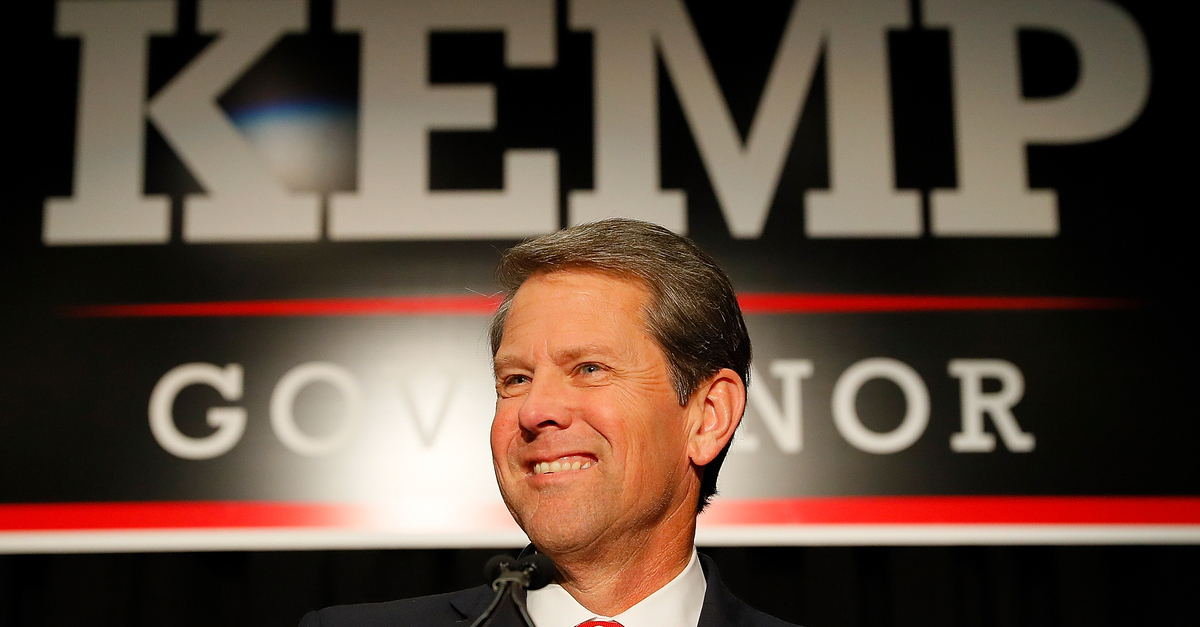 Georgia Gov. Brian Kemp (R) signed HB 481 into law on Tuesday. Known as the “fetal heartbeat bill,” it’s the most restrictive abortion prohibition in the country. Georgia’s law is not only antithetical to settled legal standards of reproductive freedom, but is also a disastrously misguided example of simple bad lawmaking.

Bad policies like the forced pregnancy bill are a direct result of voter suppression. If leaders can silence Georgians’ voices at the ballot box, they can ignore Georgians’ voices when in office. We will fight back in court and at the voting booth. #HB481 https://t.co/15iOJWaBUU

While people’s opinions differ about what abortion law should say, there’s plenty of agreement on what the current state of the law actually is. Under Roe v. Wade and related precedent, states are not permitted to prohibit abortion early in pregnancy. Georgia lawmakers know this and would simply like to ignore their responsibility to legislate in conformity with Constitutional law. Using public resources to debate, draft, and pass a law that directly contravenes clear, longstanding Supreme Court precedent is anything but “conservative.”

When you know something is unconstitutional and you still decide to 1) push it through the legislature and 2) sign it, that is a direct hit on the rule of law. Women will not forget. The fight doesn’t end tomorrow — this is where it begins. #HB481 #gapolhttps://t.co/LKBZpX15qR

A common refrain of politicians who support restrictive abortion laws is that “doctors should be punished, but pregnant women should not.” Georgia’s new law disregard that mantra; it imposes criminal penalties on women who terminate their own pregnancies. And we’re not talking fines and community service here. The law declares that a woman who has terminated her own pregnancy is a murderer, who will face life imprisonment or even capital punishment.

The extreme consequences don’t end there, either. This law would declare doctors and other healthcare providers parties to murder, subject to life in prison. We’re still not done. Women who miscarry because of their own behavior – such as those who use illicit or even prescription drugs – could be liable for second-degree murder – an offense which carries up to three decades in prison.

3. It is a bizarre callback to the Fourteenth Amendment.

That’s the legal language associated with the Fourteenth Amendment to the U.S. Constitution — the same amendment that followed the abolition of slavery and set standards for legal equality for black people in our country. It is because of the Constitution’s protection of fundamental rights that black Americans can vote, are entitled to attend desegregated schools, and can rely on government protection against discriminatory laws. Georgia’s use of this language when legislating about the unborn is simultaneously ridiculous and offensive.

Protection of fundamental rights for black Americans was (and many would argue still is) necessary to avoid being treated as a second class of citizens while they walked among their white, equally-capable, equally-deserving counterparts. The underlying tenet is that skin color does not dictate a person’s humanity, ability, or worth. Race is an arbitrary marker that must not be the basis for denying one individual the rights we give freely to another.

The distinction between the unborn and a person who has been born is not arbitrary, and using the language of the law to draw a perverse parallel not only degrades the important work of the Thirteenth, Fourteenth, and Fifteenth Amendments, but similarly vitiates the very significance of birth itself.

4. It creates a structure whereby the unborn would vote, own property, start lawsuits, and plenty more.

Now, in Georgia, “natural person” includes any human being including an unborn child. Furthermore:

Any natural person, including an unborn child with a detectable human heartbeat, shall be included in population based determinations.

The danger here isn’t slippery-slopism, or a concern about what could happen in the future. This has actually happened. Georgia declared that the unborn should be included in the head count just the same as everyone else. And that means that the unborn just got a whole batch of new legal rights.

Generally speaking, legal personhood carries with it the ability to vote, own and transfer property, sue and be sued, assert rights and endure consequences. In their zeal to prevent women from terminating unwanted pregnancies, Georgia has created a legal scheme whereby these new “natural persons” have rather a long list of rights.

One such consequence was pointed by Georgia appellate attorney Andrew Fleischman:

As of this minute, Georgia is now holding thousands of citizens in jail without bond in violation of their rights and without a Gerstein hearing. /1 pic.twitter.com/UY40FjIG92

Good point. If the unborn are legal people with the same rights as the rest of us, then the unborn child of every pregnant inmate has a really good habeas corpus case on his or her hands.