Despite Mueller Report’s Eye-Opening Evidence, Barr Made the Right Call on Obstruction 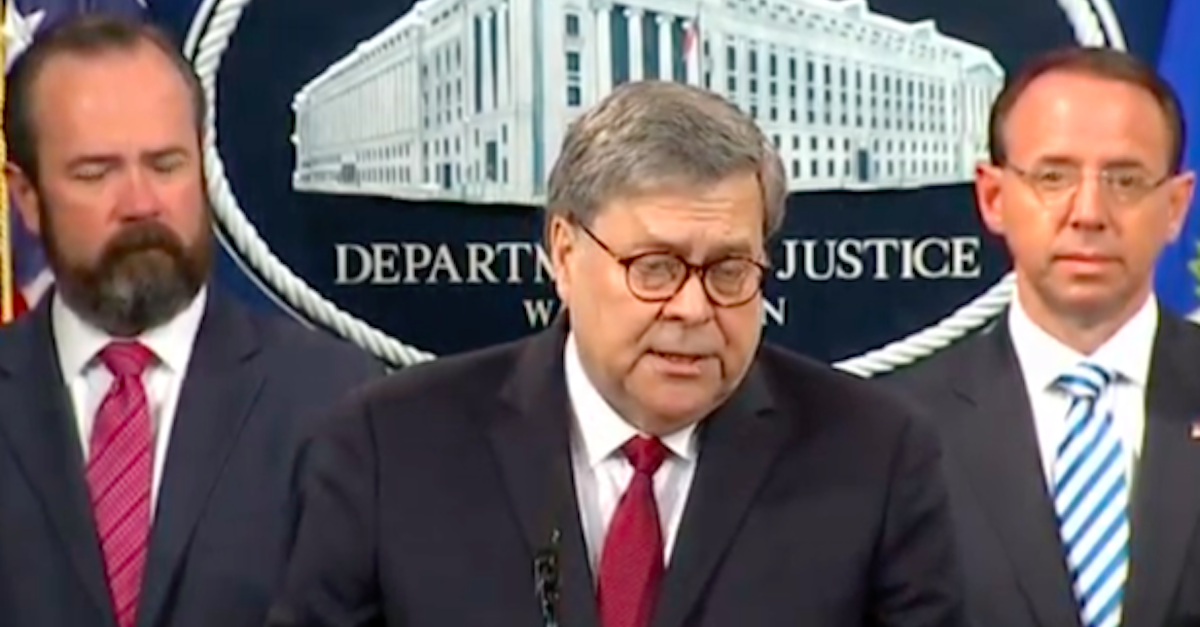 Now that Special Counsel Robert Mueller‘s report is out in the open (except for a few redactions), the evidence he examined related to possible obstruction of justice by President Donald Trump is out there for the world to see. While Mueller certainly had some evidence that warranted concern, Attorney General William Barr and Deputy Attorney General Rod Rosenstein determined it was insufficient to support a charge.

From a legal standpoint, it was absolutely the right call.

The statute that Mueller said applies “most readily” to his investigation is 18 U.S.C. 1512(c)(2), which says, “whoever corruptly … otherwise obstructs, influences, or impedes any official proceeding, or attempts to do so, shall be fined under this title or imprisoned not more than 20 years, or both.”

The key word in the statute that makes prosecution difficult is “corruptly,” which Mueller said “requires a concrete showing that a person acted with an intent to obtain an ‘improper advantage for [him]self or someone else, inconsistent with official duty and the rights of others.'”

Reading Mueller’s report, Trump doesn’t come off as someone trying to get an improper advantage. First off, an advantage for what? Mueller concluded that there was no conspiracy or cooperation between the Trump campaign and Russia, so there’s no underlying crime for Trump to cover up. While that doesn’t preclude an obstruction charge, it is a factor that comes into play when evaluating intent.

Then you have the facts. The obstruction investigation launched after Trump fired FBI Director James Comey. The Mueller report goes into the Comey firing, and events that led to it which have already been described in Comey’s own memos. This includes Trump’s private conversations with Comey where he asked Comey for loyalty and expressed his hope that Comey would drop the investigation of former National Security Adviser Michael Flynn.

The Mueller report–like the Comey memo before it–paints a picture of a president who is insecure and feeling pressure due to an investigation that he believes to be unwarranted. He described the Russia probe as a “cloud” hanging over him that made his job difficult, and he told Comey he wanted it made known that he himself was not under investigation. Comey then testified before Congress and did not make it known that Trump was not under investigation, and Trump fired him soon after.

While we can’t know exactly what was going through Trump’s mind, it looks like he really just wanted people to know he wasn’t being accused of wrongdoing, and he felt that while his campaign was being investigated, it cast doubt over the validity of his election. When Comey wouldn’t help him by letting the public know he wasn’t a target, Trump probably felt Comey was against him and couldn’t be trusted.

Of course, this led to Trump being investigated for obstruction, and Mueller being appointed as special counsel.

The other incidents that stand out in the report have to do with Trump’s subsequent efforts to remove or hamper Mueller himself. First, there was the time Trump directed White House counsel Don McGahn to talk to Deputy Attorney General Rod Rosenstein about firing Mueller. The report says that Trump wanted Mueller gone because of what he perceived to be conflicts of interest, even though his senior advisers told him there weren’t any.

Those supposed conflicts included a dispute over membership fees at a Trump golf course in Virginia, and Trump’s decision not to hire Mueller as FBI Director. Trump likely thought that Mueller would have it out for him, not believing that he would be able to act without improper bias.

With McGahn refusing to do this, Trump dropped it, but he did try to get adviser Corey Lewandowski to have then-Attorney General Jeff Sessions step in. The report says Trump wanted Sessions to change the scope of Mueller’s investigation to be limited to future election interference. This would have ended the investigation of Trump’s campaign, and depending on intent, merely asking Lewandowski to deliever the message (which Lewandowski did not) could be viewed as obstruction of justice.

Trump’s intent, however, is what ultimately matters. Did he act “corruptly” to obtain an “improper advantage”? It doesn’t look like it. To the contrary, Trump appears to think that the deck was improperly stacked against him. I’m not saying he was correct to think this, but if that’s what his mindset was, his actions should not be considered criminal.

Now, you may not believe that this was Trump’s reasoning, but you certainly can’t prove otherwise. That’s why Barr and Rosenstein decided that the evidence was insufficient for an obstruction charge. Could they have charged Trump (putting aside the DOJ policy against indicting a sitting president) based on the evidence? Perhaps, but when you’re dealing with the prosecution of the president of the United States, you better be confident in your case if you’re going to move forward and put the country and government through such an ordeal.

If Barr and Rosenstein didn’t think they could prove a case beyond a reasonable doubt, they were right not to go down that road.