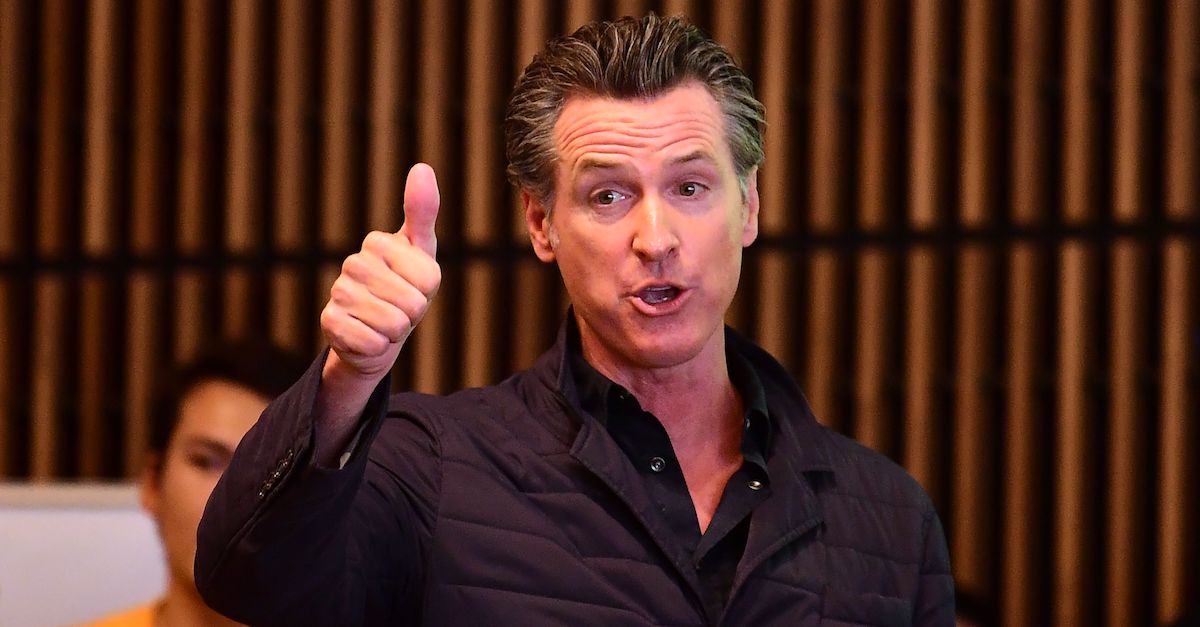 In light of the recent tragedies in El Paso, Dayton and Odessa, the gun debate has, once again, taken center stage. As a way to help curb such tragedies, the president has proposed the idea of implementing red flag laws which, according to the New York Times “are state laws that authorize courts to issue a special type of protection order, allowing the police to temporarily confiscate firearms from people who are deemed by a judge to be a danger to themselves or to others.” The California Assembly recently sent Gov. Gavin Newsom (D) a bill that expands the state’s red flag law by permitting a larger number of people to petition the court to take away someone’s guns, further eroding rights and protections under the Second Amendment.

Here’s what the expansion would allow:

The California Assembly on Monday sent a bill to Gov. Gavin Newsom’s (D) desk. The bill would expand Extreme Risk Protection Orders (ERPos), commonly referred to as red flag laws. As it currently stands, family members and law enforcement officials are able to petition the court to take away a person’s firearms. The bill heading to Newsom’s desk, if signed, would now allow employers, co-workers, and high school and college teachers and administrations to also petition a court.

The purpose behind this proposed expansion should be favored by Republicans and Democrats alike. As reported in theLos Angeles Times:

Assemblyman Phil Ting (D-San Francisco) introduced the bill following a February 2018 shooting that left 17 people dead at a high school in Parkland, Fla. He noted some school officials had raised concerns about the behavior of the 19-year-old gunman before the shooting.

“There’s no question in my mind that California’s Gun Violence Restraining Order law is a powerful tool that helps save lives,” Ting said Monday. “With school and workplace shootings on the rise, it’s common sense to give the people we see every day a way to prevent tragedies.”

On its face, the California expansion seems logical. After all, why wouldn’t we want our teachers and administrations to have the power to petition a court if they see someone exhibiting dangerous behavior? Teachers, for example, are in a good position to witness such behavior given the amount of time they spend with the children/students on a weekly basis. Rather than forcing them to voice their concerns to a family member or to law enforcement, the expansion allows them to circumvent this step, although Ting’s bill “requires teachers to go through school administrators for restraining orders.”

The obvious problem with this expansion is that it does not narrow, but broadens, the number of people who can possibly abuse, or take advantage of, this power. With this expansion, the possibility for abuse is not only among law enforcement or family members, but also among teachers, employees, etc. In other words, the pool is much bigger, thereby raising the odds that abuse will occur.

There are also constitutional concerns. For example, under this law, guns can be removed “for up to 21 days before a court hears the testimony from the person losing the firearms.” In addition, the law “expands the authorization to seek ex parte orders.” In other words, the law allows a judge to enter an order confiscating someone’s firearms without giving the gun owner an opportunity to be heard, or to contest, the matter. This raises serious due process concerns.

As with many red flag laws, there are additional concerns that are not necessarily limited to the proposed expansion. For example, as described in the Washington Times, some red flag ideas “allow for individuals to report family members deemed mentally unfit, and for local authorities to hold the power to assess and decide — and confiscate.” Who determines whether someone is “mentally unfit” to own a firearm? How do we prevent bad-faith reports from a scorned ex-spouse or boyfriend/girlfriend or a disgruntled employee? Finally, given that the Second Amendment provides for the right to own and use a firearm, are we willing to put that decision in the hands of the government?

These are but a few of the problems associated with red flag laws in general. California’s proposed expansion amplifies these potential problems. More particularly, by widening/broadening the number of eligible people who can petition the court to confiscate someone’s firearms, California could well be increasing the likelihood of abuse and/or misuse. In doing so, the expansion could further erode the Second Amendment rights that people enjoy under the Constitution. Clearly, this should not be the goal behind such laws.

The purpose of California’s proposed expansion is commendable, but not only does it suffer from the same potential hurdles facing other red flag laws, it magnifies them by increasing the number of people who could possibly abuse the process.

Presumably, everyone wants to prevent gun-related tragedies from occurring in the future. Towards that end, Congress must somehow figure out a way to make our country safer while maintaining the sacred rights that citizens enjoy pursuant to the Second Amendment of the Constitution. This very delicate balance will only happen if the parties truly work together in a bipartisan manner. In the meantime, some could argue that California’s proposed expansion casts too wide a net.

Mr. Hakim is a political writer and commentator and an attorney. His articles have been published in The Washington Examiner, The Daily Caller, The Federalist, The Algemeiner, The Western Journal, American Thinker and other online publications. Twitter: @ThoughtfulGOP.