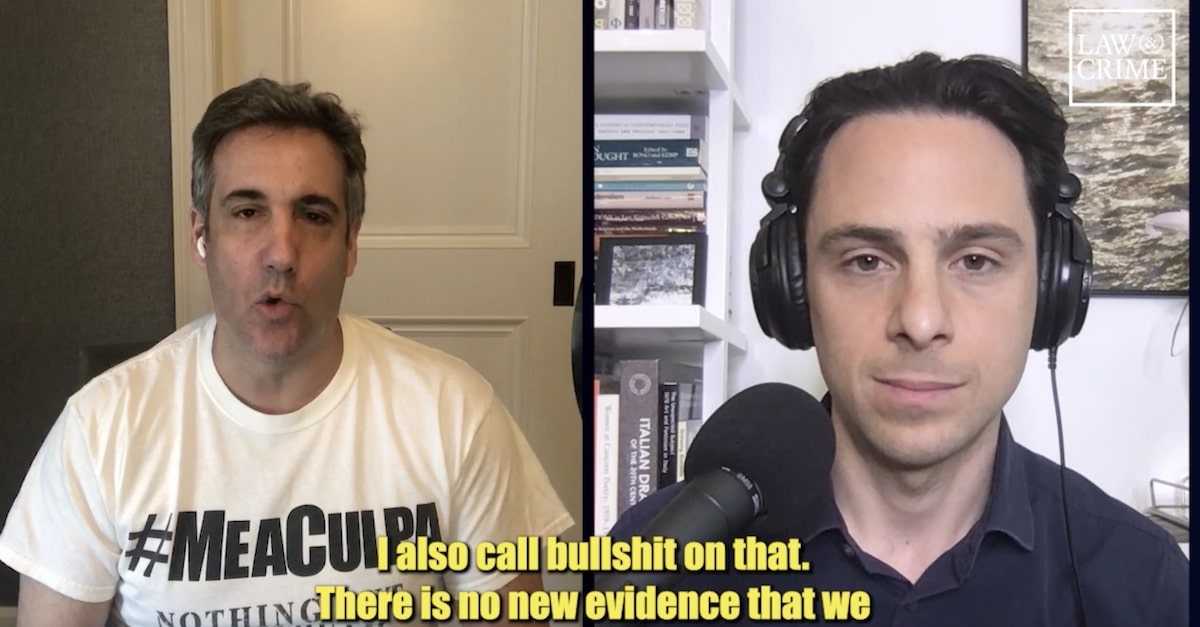 Not everyone, however, is persuaded, particularly Michael Cohen, whose congressional testimony sparked the probe into Trump some three years ago.

On the latest episode of Law&Crime’s podcast “Objections: with Adam Klasfeld,” Cohen holds nothing back about his confidence in Bragg to pursue the 45th president, splashing cold water on the Manhattan DA’s claim on CNN that he is pursuing new evidence and leads.

Bragg’s spokesperson did not immediately respond to an email requesting comment.

“My Phone Started Blowing Up”

Cohen has standing to know about such matters.

In 2019, Cohen’s congressional testimony and evidence accusing Trump of inflating and deflating his assets in return for tax benefits initiated the civil and criminal probes in New York. The criminal investigation began under Bragg’s predecessor Cyrus Vance (D), who had hired former racketeering prosecutor Mark Pomerantz to help lead the investigation along with his general counsel, Carey Dunne.

This past February, Pomerantz and Dunne precipitously resigned, just weeks after a recently-elected Bragg took over the probe, in a move that blindsided many legal observers. Even Cohen said he was surprised by that development.

“It would have been nice that, after [I had been] dedicating 15 sessions with them, somebody would have let me know that this is going to happen because people like yourself started calling me,” Cohen said. “My phone started blowing up.”

Cohen added that he initially did not know the reason for the barrage of press inquiries.

“No matter how much odds you would have given, I’d never would have thought that this would have been the reason that everybody was calling that Mark Pomerantz and Carey Dunn resigned,” Cohen continued. “I know the, again, the information that they have.”

For Cohen, he knew the investigation was over when the DA’s office started returning the “millions of pages” of boxes filled with documents that he provided. He said that they represented an enormous hall, “boxes lined up as far as you can see, right down the hallways.”

“Anybody who is involved in the area of law will tell you prosecutors never give you back documents from ongoing investigations, especially the originals,” Cohen said.

Late last month, the New York Times published Pomerantz’s resignation letter expressing frustration in Bragg’s decision not to indict Trump, who Pomerantz said committed “numerous felony violations.” Pomerantz wrote that he believed that he could have proven those to a jury “beyond a reasonable doubt”—and that Vance had expected his successor to indict Trump as soon as possible.

“A Slap to the Face”

According to Cohen, Pomerantz learned that Bragg didn’t want to pursue the case from a memo, rather than hearing about it from his boss in person.

The demurral was a “slap to the face of a two-year-plus investigation that started when the district attorney [Vance] came to visit me on three occasions at Otisville,” Cohen said, referring to the federal prison in New York where he served a part of his sentence in connection with Robert Mueller’s Russia investigation.

In December 2018, Cohen received a three-year prison sentenced for campaign-finance violations in connection to hush-money payments made to Stormy Daniels that he made on Trump’s behalf and direction. He also pleaded guilty to lying to Congress about Trump’s attempted billion-dollar real estate deal in Moscow during the height of the 2016 campaign.

Those convictions supplied House Oversight Committee Republicans a ready-made attack line with which to “castigate” him the next year, Cohen recalled.

Some legal experts have opined that any prosecution of Trump would be difficult for the same reason. The former president did not send texts or emails and the Trump Organization’s chief financial officer Allen Weisselberg never cooperated with the government after being indicted on tax crimes. That would only leave Cohen, who would inevitably be grilled about his false statements conviction on cross-examination. His current feelings about Trump are also apparent by the name of his podcast, Mea Culpa.

In the face of those critics, Cohen pointed to his approach before the committee: “I wasn’t going to allow them to label and brand me as this convicted liar.”

In one famous example, the former president allegedly inflated the size of his Trump Tower triplex nearly three-fold, which he described as evidence of criminal intent.

“Now, if you tell me that he didn’t know his apartment is not 33,000 square feet, I turn and tell you someone hit you this morning in their head with a stupid stick,” Cohen said. “Because not only is he the owner of the apartment—and you know how big your home is, or your apartment—but he’s also the developer.”

Beyond the Manhattan DA probe, Cohen discusses reports about Trump’s children and the Jan. 6 Committee and his civil lawsuit over being sent back to prison after announcing plans to write a book, a sequence of events that one federal judge found to have been retaliation.

Listen to the full podcast, below:

(Screenshot of video interview with Michael Cohen on “Objections: with Adam Klasfeld)