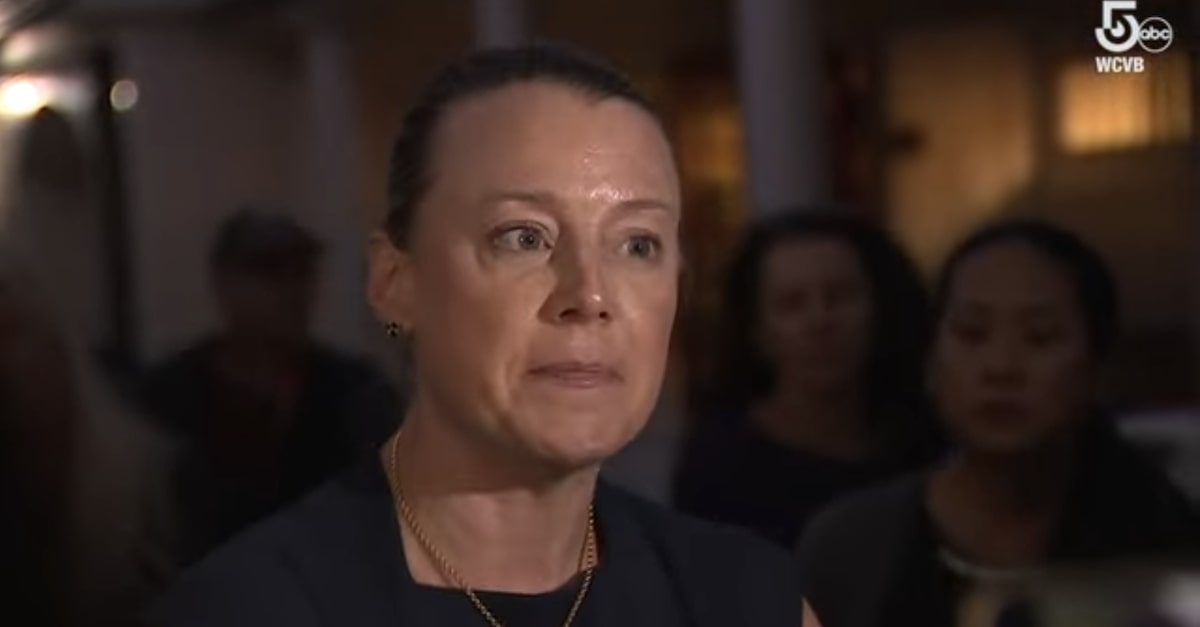 Rachel Self speaks at a press conference in Martha’s Vineyard. (Screenshot from WCVB broadcast on YouTube)

When announcing an investigation last week into the relocation of 48 migrants from Texas to Martha’s Vineyard, Massachusetts, Bexar County Sheriff Javier Salazar denounced “political posturing” at the expense of asylum-seekers. He also credited one immigration attorney for shining a light on their plight: Rachel Self, who had been on the ground helping the migrants on the island.

On the latest episode of Law&Crime’s podcast Objections: with Adam Klasfeld, Self reflects upon her conversation with the sheriff, her encounters with the immigrants, and the possible criminal liability of those who “victimized” them.

“What I described to [Salazar] was just what had happened to these various individuals and what they were told,” Self reflected. “And then once they were dropped on the ground here on Martha’s Vineyard, one particular group was told to just go up and ring people’s doorbells. ‘Ring the doorbells of people, and they’ll help you.’ He was horrified at that.”

Salazar’s horror was palpable during his press conference last week on Sept. 19, where he expressed indignation about the possible crimes he was investigating.

“What infuriates me the most about this case is that here we have 48 people that are already on hard times,” Salazar told reporters. “They are here legally in our country at that point. They have every right to be where they are. And I believe that they were preyed upon. Somebody came from out of state preyed upon these people, lured them with promises of a better life, which is what they’re absolutely looking for.”

The investigation took national dimensions because Florida Gov. Ron DeSantis (R) took credit for relocating the migrants — allegedly, using $615,000 in taxpayer money from a $12 million pool set aside by the state legislature, according to a federal lawsuit.

The Texas sheriff declined to explicitly state that DeSantis is under investigation, and Self emphasized that she feels this is “not a political story.”

“No matter what your political beliefs are: Under the letter of the law, what happened to them was a crime,” she charged. “And so as far as the governor’s connection to this, I have nothing to say to that.”

An immigration and criminal defense attorney, Self asserted that the conduct at issue violated Texas law under section 20.02 of the state’s penal code, which punishes unlawful restraint.

“The Texas penal code makes it a crime to knowingly restrain another person, and ‘restrain’ means restrict a person’s movements and liberty by moving them from one place to another without their consent,” Self explained. “So a lot of people are saying things like, ‘Well, they weren’t handcuffed. They weren’t taken by force.’ But of particular importance, restraint is without consent if it’s accomplished by force, intimidation, or deception.”

Similarly, Self said that she believes the federal kidnapping statute’s language sweeps some of the conduct at issue through the word “inveigles.” Asked whether she is aware of the Justice Department looking into a possible violation of that law, Self responded: “I believe that there are several people looking into this,” though she added that the agency has not formally announced a probe.

“Thinking of Them as People”

In every account of the migrants’ journey from San Antonio and Martha’s Vineyard is a woman named Perla, who is said to have lured them.

“She offered them the sun in the moon in the stars,” Self said of Perla. “Things that were offered were help with all of your immigration paperwork, lawyers, English classes, assimilation into the culture, jobs, expedited work authorization, housing. They were sold all these castles in the sky, and it sounded like a really good deal.”

The migrants reported being told that they had to sign a consent form to obtain a $10 gift card to McDonalds, an attractive offer to people suffering food insecurity after traveling across several countries. DeSantis has cited the consent forms in defending his actions. The governor characterized the program as providing free travel to sanctuary jurisdictions, whose protections for undocumented immigrants have long made such jurisdictions vilified by the political right.

Scoffing at that notion that the migrants agreed to their treatment, Self said: “The form might be titled ‘Official Consent to Transport,’ but obviously, saying something doesn’t make it so. I mean, I love my Ben and Jerry’s, and I know that it has a lot of calories in it. When I go and eat it late at night from my refrigerator, if I post sticky notes on it saying it was ‘Fat Free,’ it wouldn’t make it fat free.”

At least two lawsuits have been filed to date on the scheme, in complaints calling the actions “fraudulent.”

Self said that those who sent the migrants to Martha’s Vineyard knew that the enclave did not have the resources to accommodate them — and did not count on the outpouring of support for asylum-seekers.

“They knew there would be no infrastructure, nor any organizational capacity on Martha’s Vineyard to be able to help anyone,” Self said in the interview. “They knew that they wouldn’t be able to leave easily. So it was either designed to be confusing, demoralizing and frightening for them, or maybe worse: It was designed without thinking how they would feel at all, because the people who pulled this stunt didn’t think of them as people. And they can’t conceive of anyone else thinking of them as people, either.”

Listen to the podcast here: