‘There Was No Plan’: Lawyer for Florida Oath Keepers Leader Claims Client Went to D.C. to Help Roger Stone, Not to Storm U.S. Capitol 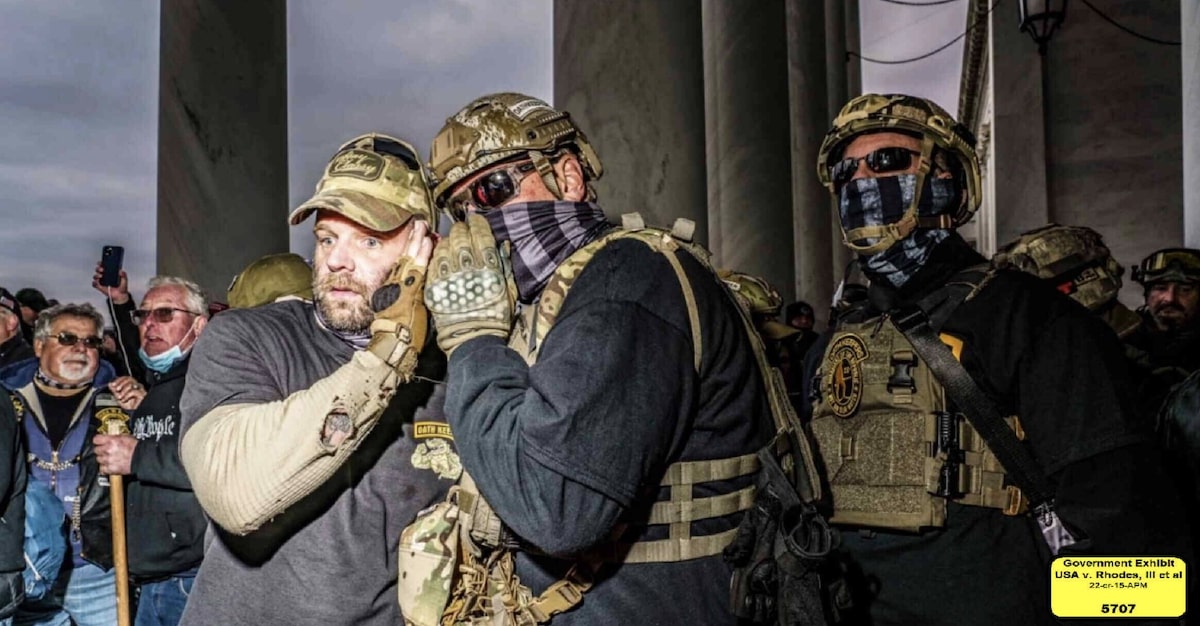 Oath Keepers members Kelly Meggs (left) and Ken Harrison (center) are seen in a photograph entered into evidence during a seditious conspiracy trial. (Photo via DOJ)

Former President Donald Trump’s associate Roger Stone personally invited the Florida chapter leader of the Oath Keepers to attend the rally at the Ellipse in on Jan. 6th in Washington, D.C., an attorney said as the defense kicked off in the seditious conspiracy case.

That detail, as asserted by attorney Stanley Woodward, was meant to established what he described to jurors as an “alternate theory” of the case: that client Kelly Meggs went to Washington on Jan. 6th to provide security assistance, not to storm the U.S. Capitol.

“There was no plan: No plan to go into the building. No plan to block the certification of the election,” claimed Woodward, in an opening statement that he deferred in early October.

Along with Meggs, Oath Keepers member Kenneth Harrelson put off his opening statement until the government finished its case. After the government rested on Wednesday, Meggs and Harrelson went in sharply different directions in their defense attorney’s characterizations of the case. For Woodward, Meggs was a passionate man whose organization had been animated by the national turmoil in the summer before the last presidential election.

“Let’s remind ourselves where we are. Where we were. It was the summer of 2020. A pandemic plagued us,” Woodward said, setting the scene.

After months of physical isolation wrought by COVID-19, a resurgent Black Lives Matter movement brought people out of their quarantines into the streets to protest the deaths of Black men and women at the hands of police.

“They too were watching what was happening in the summer of 2020,” Woodward said, referring to the Oath Keepers. “Watching the protests. Watching the riots.”

Woodward said that national media coverage of the unrest caused the ranks and activity of the Oath Keepers to swell in Florida — and the group surfaced in Louisville, Ky., for the protests over the death of Breonna Taylor.

If Woodward portrayed Meggs as opinionated about national events, Harrelson’s attorney Brad Geyer painted his client as “apolitical” — and even ignorant about the machinations of the federal government.

That point is key to the top charge against the defendants: seditious conspiracy, a rarely charged statute punishing attempts to overthrow the government or the execution of its laws by force.

In making their case, the government noted that the Oath Keepers gathered a so-called “quick reaction force” (QRF) in a Comfort Inn in Alexandria, Va., where they stashed weapons. Surveillance footage showed members of the group pushing what appeared to be gun cases on a dolly. Prosecutors also showed Oath Keepers founder Stewart Rhodes purchased thousands of dollars worth of firearms and components before Jan. 6.

For Geyer’s part, he did not dispute the overwhelming evidence that his client did bring weapons to the hotel.

“Did Kenny bring firearms, or a gun case with a firearm to a Virginia hotel?” Geyer asked, before answering his own question. “Yes, the evidence in this case is going to show that he certainly did.”

Geyer argued, however, that those guns were legal under Virginia law.

As for Stone, the longtime GOP operative and Trump associate has been a looming figure in the trial. The Jan. 6th Committee noted that both the Oath Keepers and the Proud Boys had encrypted chat rooms titled “F.O.S.,” short for “Friends of Stone.” Some of those Signal chats have come into evidence during the governments case, as have photographs of Stone with Oath Keepers members. 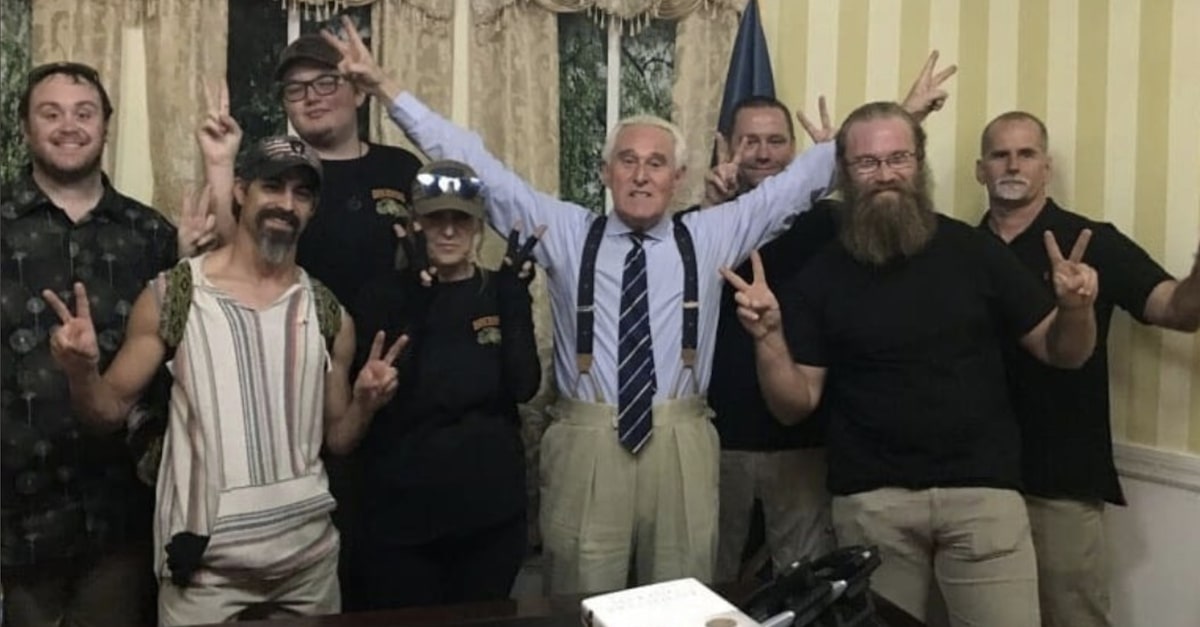 Roger Stone holds his arms in a “V” and pops up victory hand signs in a Richard Nixon style in this photograph with Oath Keepers members Graydon Young (far right) and Joseph “Ahab” Hackett (directly to Young’s left). (Photo via DOJ)

According to Woodward, the Oath Keepers came to be connected to Stone through conspiracy theorist broadcaster Alex Jones, on whose show Rhodes appeared. The lawyer noted, with some understatement, that Stone is known for “many things,” and has a tattoo of former President Richard Nixon on his back.

Like Nixon, Stone has a reputation for dirty tricks. He was pardoned after being convicted of witness tampering and other offenses in connection with the Robert Mueller investigation. Together with the Oath Keepers, the leaders of the Proud Boys are the only other individuals currently facing seditious conspiracy charges.

Editor’s Note: A caption on the photograph of this article has been changed to remove an identification.