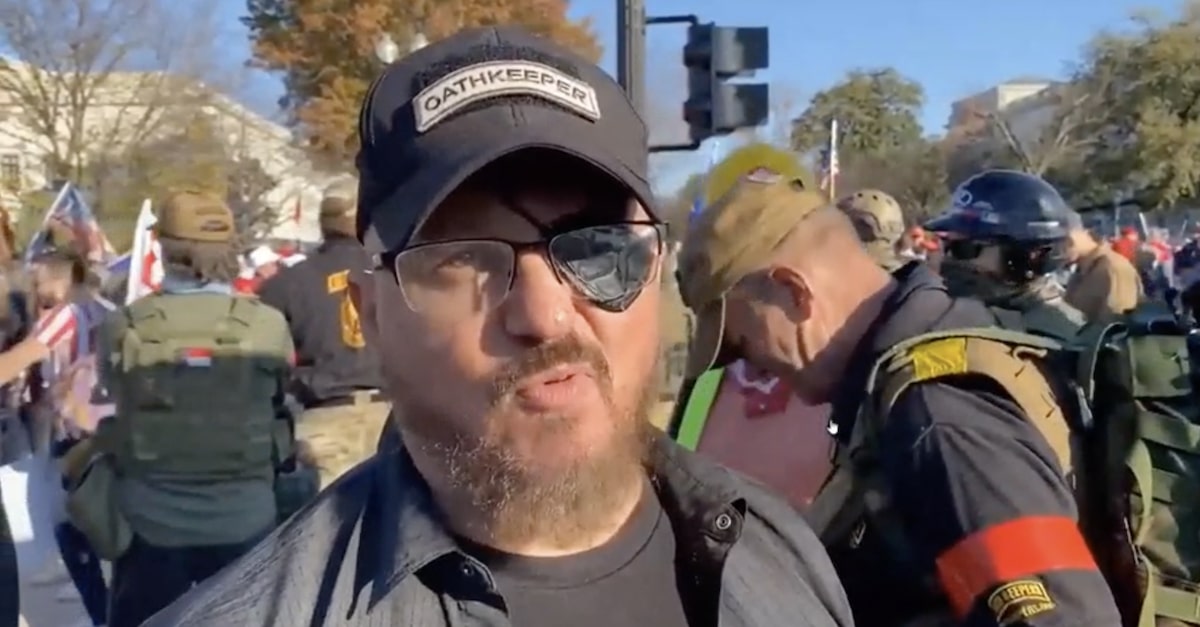 Oath Keepers leader Stewart Rhodes is seen in a still frame of a video played during his seditious conspiracy trial. (Image via DOJ)

More than countering the evidence against his client, an attorney for Oath Keepers leader Stewart Rhodes used his closing arguments to address the press coverage that shaped his reputation. He claimed that “media”-fueled “misconceptions” led to the group’s portrayal as “xenophobic,” “racist,” and “misogynist.”

“You’ve seen the diversity of the organization,” his attorney James Lee Bright told the jury, noting that the group’s former second-in-command was Black.

That former Rhodes deputy and Oath Keepers vice president, Greg McWhirter, reportedly became a government informant. A defense witness, Michael Greene, testified that he looked warily at the Oath Keepers after seeing some of their members appearing to stand close to white supremacists at a gun show, but Greene said that McWhirter eased his qualms.

“We have a transgender [sic] as one of the defendants,” Bright said, referring to Rhodes’ accused co-conspirator Jessica Watkins.

During his turn on the witness stand, Rhodes played up his mother’s half-Mexican heritage and counted himself as one of the “Latinos for Trump.” Rhodes provided a selective view of the Oath Keepers’s founding as a reaction to changes in U.S. jurisprudence following the Sept. 11 attacks. He testified that the Supreme Court upholding the George W. Bush-era policy of designating certain U.S. citizens as enemy combatants ranked up with the Korematsu ruling, which upheld Japanese internment.

In fact, the Oath Keepers’ founding came years after that ruling in 2009, shortly after Barack Obama’s election as the first Black president in U.S. history. Rhodes announced its founding on the Alex Jones show, telling the conspiracy theorist that he chose to launch it in Lexington, Mass., on April 19, the anniversary of the opening shot of the American Revolution.

Throughout the defense case, numerous Oath Keepers members and affiliates described being activated by the riots and protests across the country after George Floyd’s murder in the summer of 2020. Bright claimed that the Oath Keepers attended those racial justice demonstrations simply to keep the peace.

“They saw their country burning,” he said, saying that they didn’t take sides on where to fight.

Bright insisted that the social unrest that summer consisted of mostly “riots” and “not ‘mostly peaceful protests,'” but that exaggeration isn’t empirically accurate. Multiple studies show that the demonstrations were largely peaceful, and where violence and arson did occur — such as in Portland, Ore., Minneapolis, Minn., and Kenosha, Wisc. — it was not city-wide, but rather confined to specific blocks.

Prosecutors produced evidence of authorities in Ferguson, Mo., and Lexington, Ky., being less than pleased by the Oath Keepers’ presence.

Earlier on Friday, the government told the jury to take the Oath Keepers’ “civil war” rhetoric seriously, noting that they weren’t simply the “rantings and ravings of old men at a barber shop.” Assistant U.S. Attorney Kathryn Rakoczy added that their words were met by actions: The Oath Keepers did, in fact, gather from across the country in Washington, D.C., save for a smaller “quick reaction force” that stayed behind in a Comfort Inn in Arlington, Va. Prosecutors say that this QRF, as it is abbreviated, stashed large amounts of firearms in the hotel, ready to ferry the weapons across the Potomac at then-President Donald Trump’s command.

But Bright noted that the group never deployed with their “toys.”

“Nothing happened, and they went home,” Bright said.

All five of the Oath Keepers defendants currently on trial have been charged with a seditious conspiracy to overthrow the U.S. government or the execution of its laws by force. Jurors have been instructed that an express or written agreement is not necessary, only a meeting of the minds. Bright claimed that the government has not met that bar.

For Bright, the fact that Rhodes never deployed the QRF and sent Thomas Caldwell, a then-65-year-old man with back and shoulder injuries, into the Capitol shows that overthrowing the government wasn’t the goal.

“You’re either the Keystone Cops of insurrectionists, or there was no insurrection,” Bright quipped.

After the summation for Rhodes, an attorney for Oath Keepers Florida chapter leader Kelly Meggs told a jury that the prosecution’s case had missed a crucial word: “security.” Attorney Stanley Woodward vowed in his opening statement that the evidence would show that Trump ally Roger Stone invited Meggs to Washington, D.C., on Jan. 6. He has now made the Oath Keepers’ habit of acting as bodyguards from Trump notables like Stone, Jones, and Michael Flynn a centerpiece of the defense case, as his client’s reason for being on the ground.

Attorneys for Kenneth Harrelson, Thomas Caldwell, and Watkins will deliver their closing arguments on Monday, followed by the government’s rebuttal.