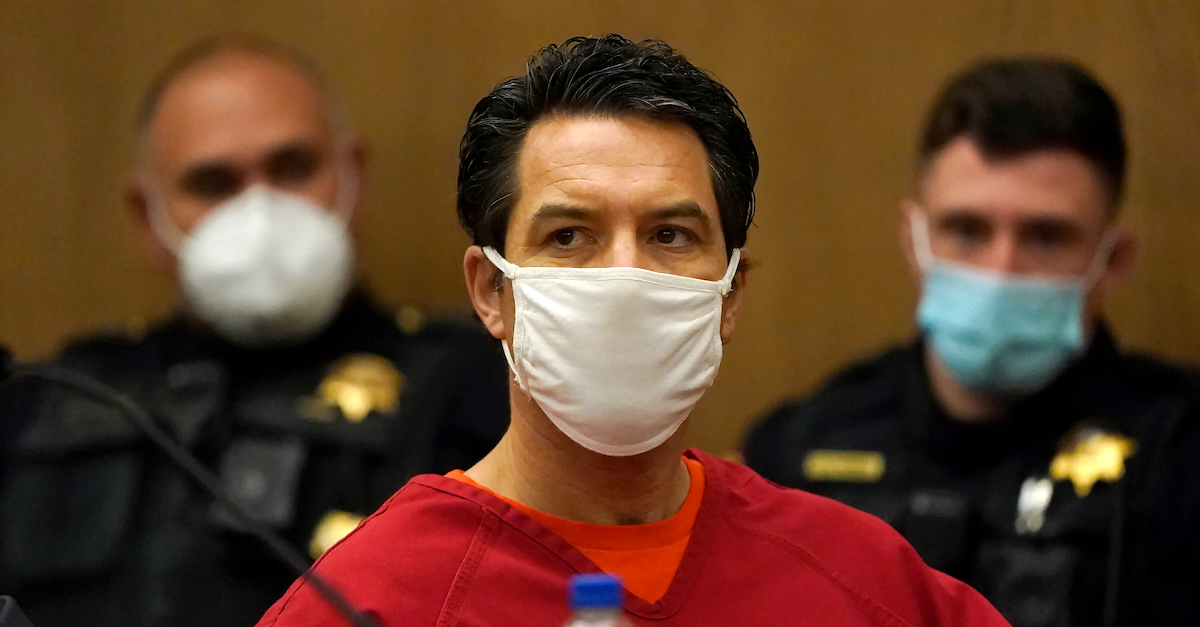 Scott Peterson, who was convicted in November 2004 of murdering his wife and the couple’s unborn son, appears in court on Feb. 25, 2022, for a habeas corpus hearing. (Photo by Jeff Chiu/The Associated Press/Pool.)

Scott Peterson, the man convicted of killing his wife Laci Peterson, 27, and the couple’s unborn son in 2002, fought on Friday for a new trial by attempting to discredit one of the jurors who convicted him.

Laci was eight months pregnant with a son the couple planned to name Conner Peterson when she died. A California jury in 2004 agreed that Scott attacked Laci on Christmas Eve and dumped her body into the San Francisco Bay. Authorities nabbed Peterson after massage therapist Amber Frey told the police she started dating Scott Peterson a month before Laci disappeared. Frey maintained that Scott told her that his wife had died; Scott Peterson maintained his innocence despite his conviction. 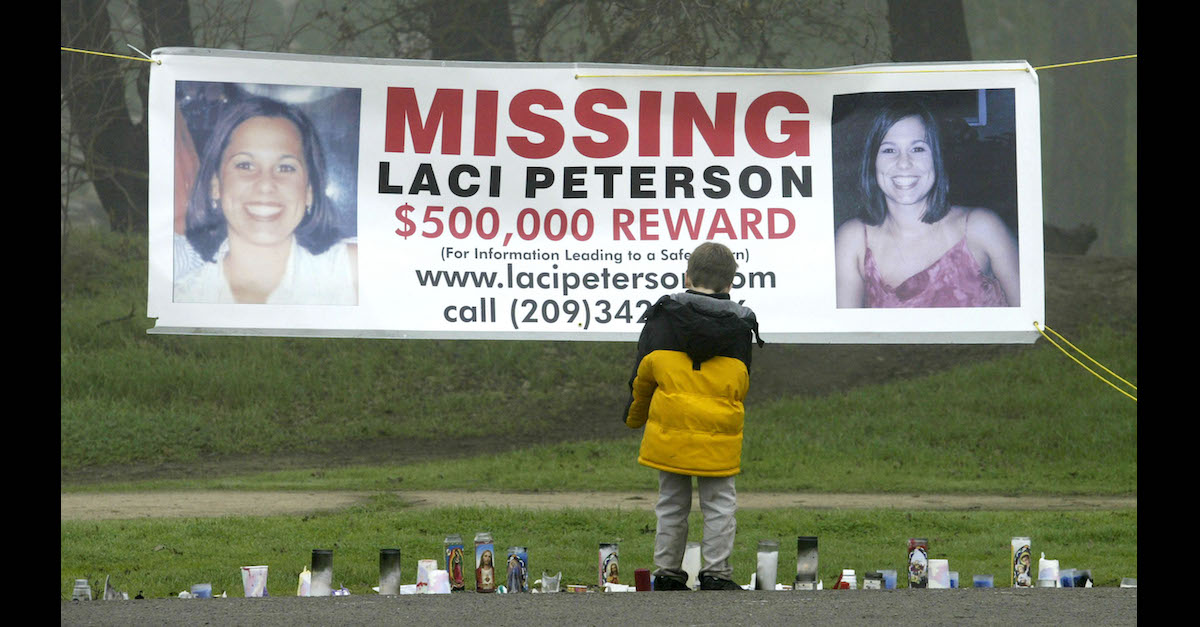 A young child stops to look at a makeshift memorial and a missing person’s banner offering a half-million dollar reward for the safe return of Laci Peterson. The banner was in the East La Loma Park on January 4, 2003 in Modesto, California. Laci’s body wasn’t discovered until mid-April 2003. (Photo by Justin Sullivan/Getty Images.)

Attorneys for Peterson, now 49 according to jail records, filed a habeas corpus petition on the grounds that Juror 7, who has since identified herself as Richelle Nice, was biased before she joined deliberations in the Peterson murder case.

Nice, who was dubbed “Strawberry Shortcake” due to what the Associated Press called her “dyed red hair,” has been accused by Peterson’s defense team of lying about her past status as an alleged victim of domestic violence.  Peterson’s legal team claims Nice lied because she explicitly wanted to convict Peterson.

The hearing was carried online by a courtroom audio stream; however, no journalists, including Law&Crime, were allowed to record or retransmit the proceeding. 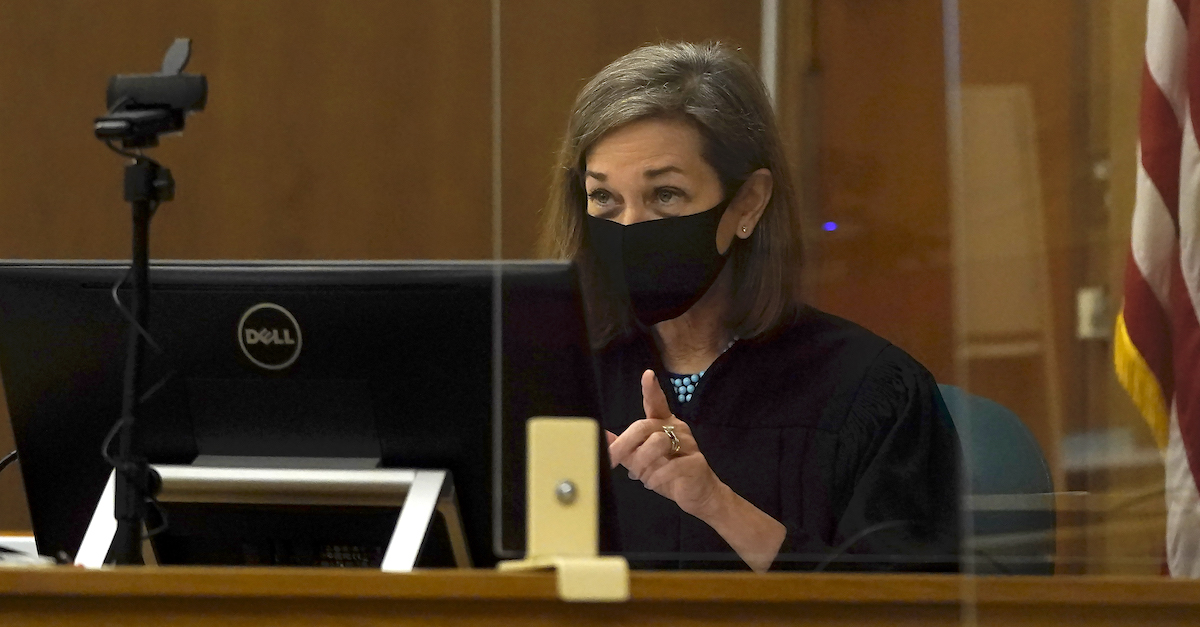 Nice testified that her a portion of her original voir dire questionnaire from the jury selection process was only “somewhat true” — but most of her back-and-forth battle with Peterson’s attorneys was a quibble over language. Specifically, Nice said she wasn’t sure she considered herself a crime victim because she once agreed to drop all potential charges in what has been described as a domestic violence incident. In part because she agreed to drop the potential charges, she did not identify herself as a “victim” on Peterson’s jury questionnaire.

Here are several of the questions from an original March 9, 2004 juror questionnaire filled out by Nice before she was selected as an alternate — and, eventually, as a deliberating juror — in Peterson’s trial: 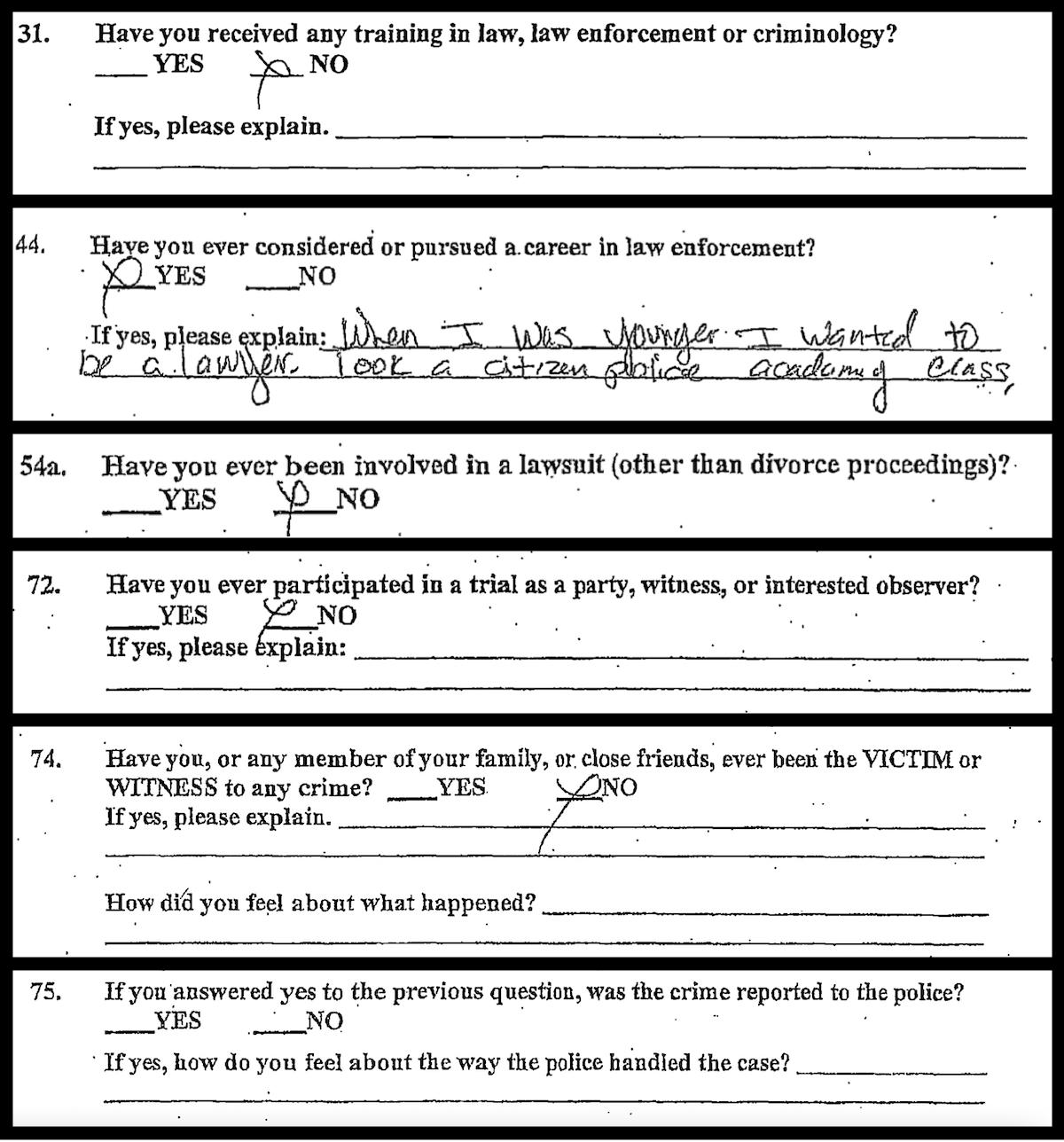 Scott Peterson’s defense team says these selections from Richelle Nice’s March 9, 2004 juror questionnaire suggest she was trying to hide her past in order to get on the jury.

Notably, the 2004 juror questionnaire failed to mention that Nice in the year 2000 once sought a restraining order against her boyfriend’s ex-girlfriend while she (Nice) was pregnant. A Nov. 27, 2000 court document which originally sought the restraining order, filled out by Nice herself, references Nice in the third person. The document states that Nice “really fears for her unborn child” and even “started having early contractions” due to threats from her boyfriend’s ex-girlfriend.

One relevant section of that November 2000 court file is here: 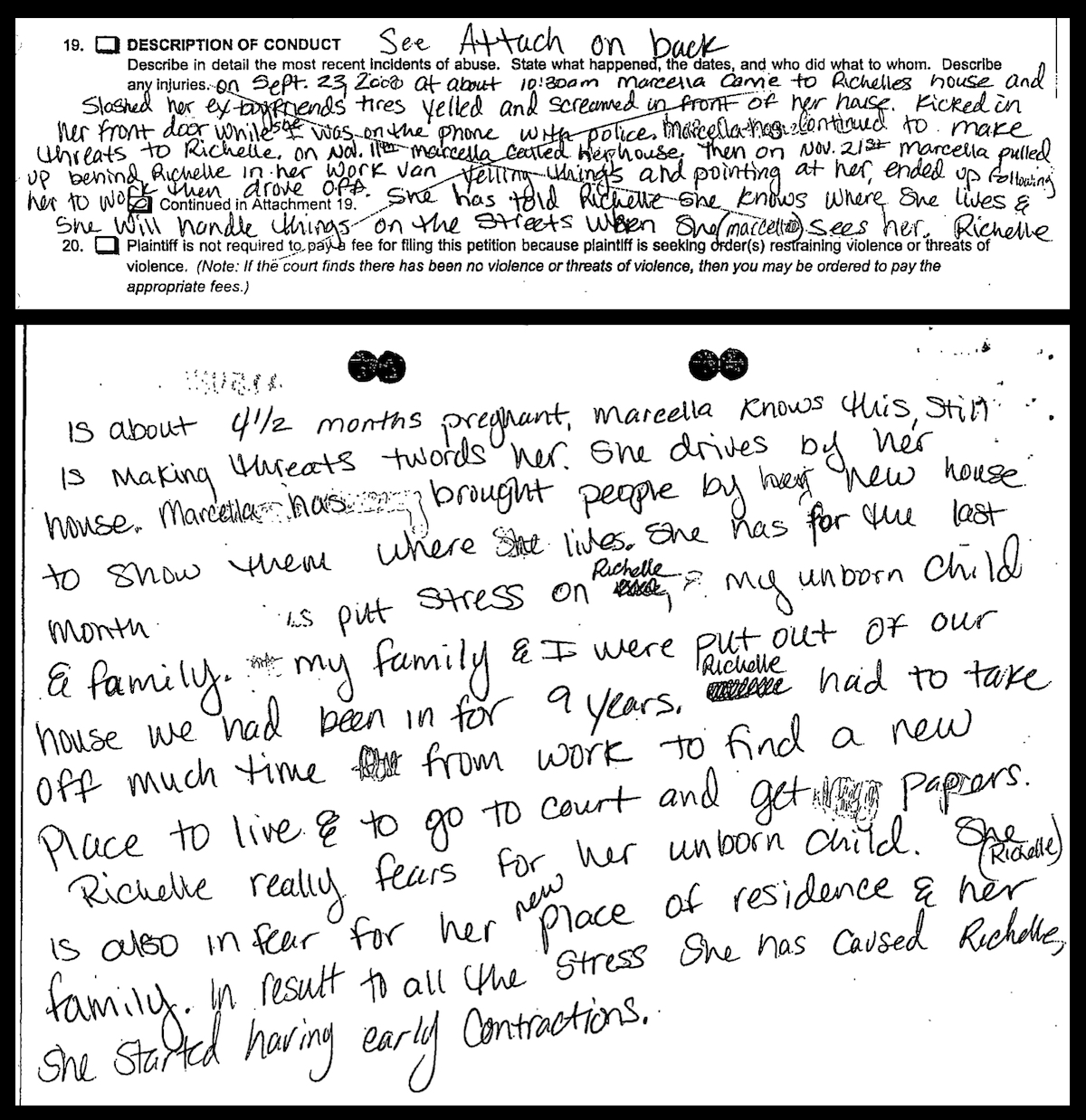 A case file captioned Richelle Nice v Marcella Kinsey drew the attention of Scott Peterson’s defense team. In it, Nice said she feared for her unborn baby. The case was number 415040 in San Mateo, Calif. The document is dated Nov. 27, 2000.

On Friday, Nice attempted to clarify the line she wrote back in the year 2000 about the so-called “fears for her unborn child.” She said her fears were about the potential for a fight but were not a reference to “a genuine fear” that someone was actually attempting to target or “hurt” her child with any sort of specific intent aimed toward the child.

“I was in fear if we fought . . . and rolled around like some dummies on the ground, then, yes, I would be fearful that I would lose my child doing something stupid like that,” Nice testified in hindsight on Friday.

She also testified she was being “spiteful” by including that language in the court file.

Nice and the attorneys questioning her said the attack that led to the 2000 complaint included the slashing of tires, the kicking in of a door, the spraying of mace, and a call to fight in the streets.

“She didn’t threaten my baby,” Nice retorted as to her boyfriend’s ex-girlfriend.

The 2000 case is relevant, Peterson’s attorneys have argued, as to whether Nice was accurate when she filled out the subsequent March 2004 juror questionnaire for Peterson’s murder trial. Had she been more descriptive in that 2004 document — or, in the Peterson defense team’s telling, honest and accurate — she would have been kicked out of the jury pool and never would have sat in position of judgment against Peterson, his lawyers have alleged. 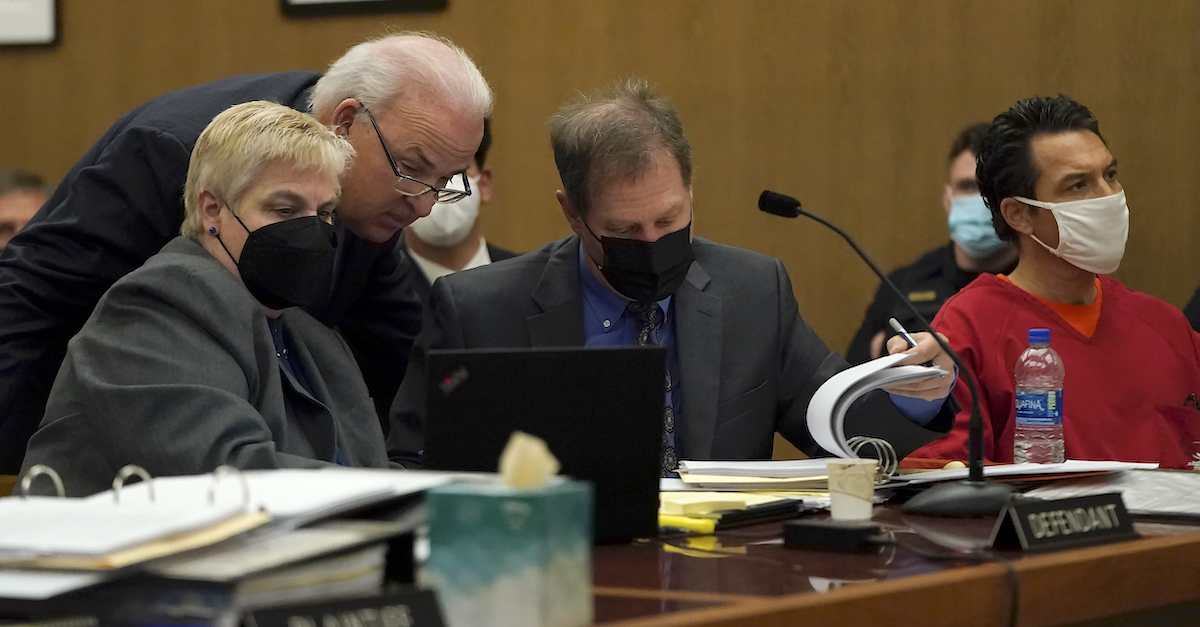 Peterson’s attorneys suggested that Nice should have identified herself as a “victim” when prompted by question 74 of the 2004 questionnaire.

“I’ve been in many fights, and I don’t consider myself a victim,” Nice testified on Friday.

“You have your own definition of ‘victim’?” an attorney asked her.

Peterson’s defense team also quibbled with Nice’s statements in the questionnaire that indicated she had no legal acumen. Nice admitted she for a time worked for a law firm.

They further goaded Nice for stating “no” in the 2004 questionnaire to a prompt about whether she had “ever been involved in a lawsuit.”  They reminded Nice that the 2000 matter involving her boyfriend’s ex was, in technicality, a lawsuit; Nice responded that she didn’t know her request for an order of protection qualified as a lawsuit. Nice later testified that she “made amends” with the woman she accused and dropped the matter against her. 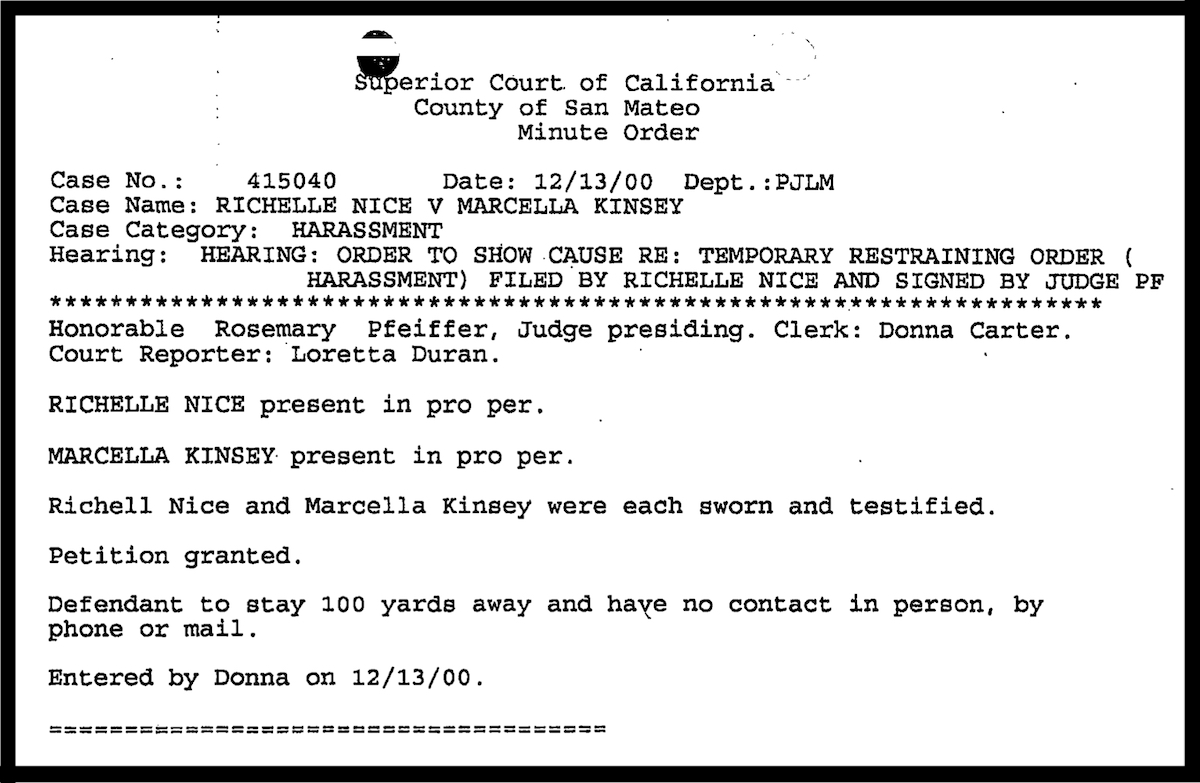 Scott Peterson’s attorneys filed this minute order from Richelle Nice’s request for a restraining order against her boyfriend’s ex-girlfriend in their bid to secure a new trial for Peterson.

Another section of the jury questionnaire was now “partially true,” Nice said. Specifically, Nice said that “before the trial,” she “didn’t have any anger or resentment toward Scott [Peterson] at all.” After the trial, she said she did. But obviously the questionnaire only involved her pre-trial thoughts since it was — of course — written before the trial.

Nice testified that most of the questionnaire document was either “true” or “absolutely true” from her perspective. 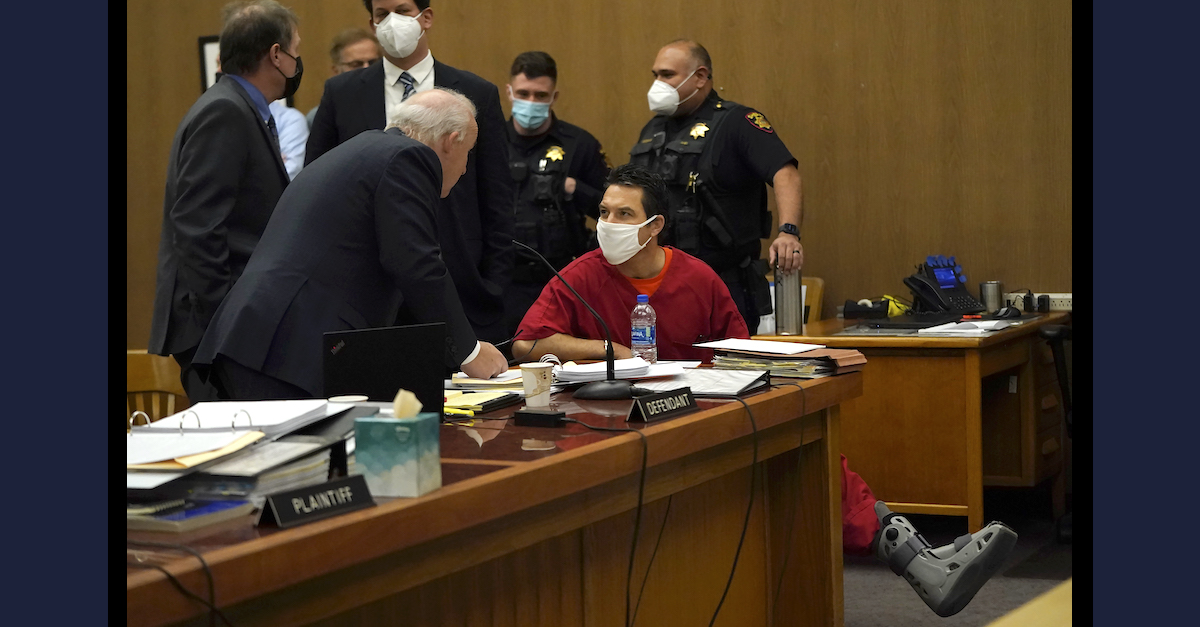 The Friday hearing broke little new factual ground but rather gave Peterson’s defense attorneys to attempt to skewer Nice for her alleged errors and omissions in filling out the 2004 questionnaire. The hearing is scheduled to continue after a lengthy break on Friday, when this report was published, and into next week. When it concludes, a judge will decided if Peterson deserves a new trial.

The original habeas corpus filing is below, as are some of the key exhibits — including the letters Peterson and Nice wrote back and forth to one another after the original murder trial concluded.