‘This Was a Whodunnit’: Lead Agent in Pike Co. Massacre Details Receiving Tips from Psychics and More at Early Stages of Investigation 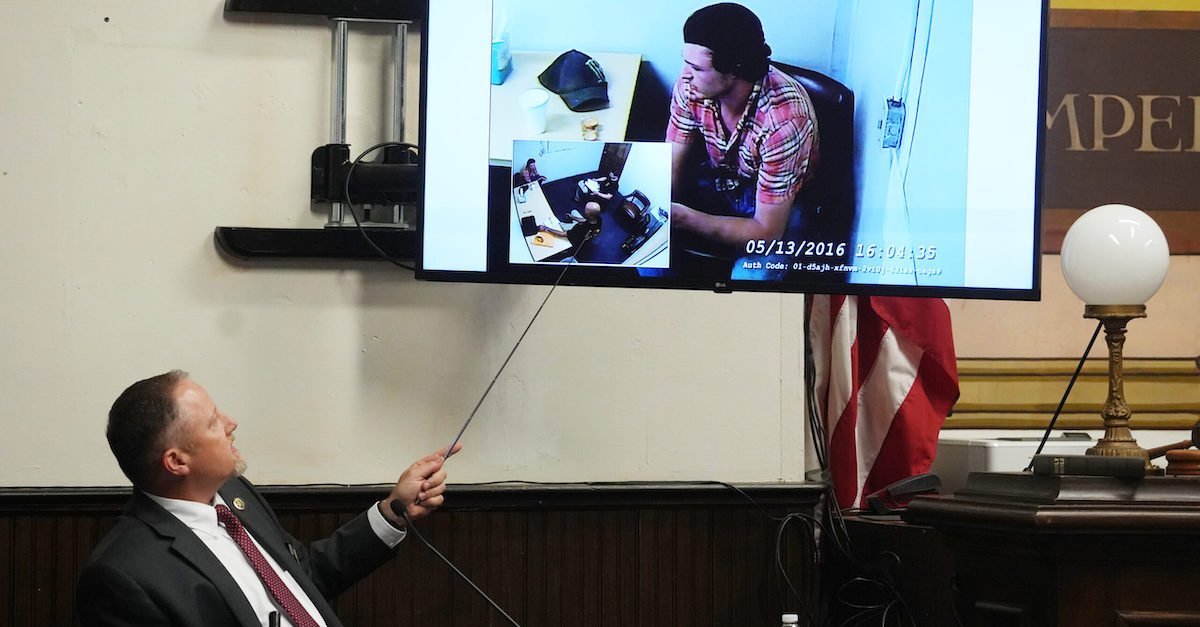 The lead state agent investigating the slayings of eight members of the Rhoden and Gilley families testified this week in the trial of George Wagner IV about the murder probe’s early stages. Calling it “overwhelming,” the agent detailed how investigators ran down more than 1,000 tips that came from psychics, inmates, and even the death of star singer Prince.

Ryan Scheiderer, of Ohio’s Bureau of Criminal Investigation, testified about arriving on the scene the morning of April 22, 2016 and realizing the four crime scenes were in areas that were not well-traveled. In particular, Scheiderer pointed to Left Fork Rd. where Kenneth Rhoden was found shot once in the eye that afternoon in his camper.

“The scenes are very secluded,” Scheiderer said. “Especially Left Fork … not everybody would know that this road is here.”

Scheiderer said agents were called in from around the state to investigate the murders that spanned four crime scenes — three on Union Hill Rd. and one on Left Fork Rd. A rush was placed on DNA, ballistics and shoe impression evidence — the only early clues in the case. No DNA from suspects was found. It was determined, however, that three different guns were used in the crimes: a .22 caliber, a .40 caliber Glock 2nd generation and a high-powered .30 caliber rifle.

“This was a whodunnit murder,” Scheiderer said. “Just trying to develop any critical pieces of information that would help you ultimately be able to identify who committed these.”

Testimony from a state crime lab analyst revealed the shoe impressions left in blood at the crime scenes came from a size 11 Athletic Works gym shoe sold at Walmart stores.

Scheiderer testified that once the crime lab analyst determined that gym shoes purchased from Walmart left shoe impressions in blood at the crime scenes, agents subpoenaed receipts and surveillance video from Walmart stores within a 50-mile radius of the crime scenes. It was determined that Leonard Manley, the father of victim Dana Rhoden, had purchased those gym shoes. But Scheiderer said they pulled those gym shoes from the trash and ruled out Manley as a suspect because he wore a size 10 and the treads were worn. Analyst Suzanne Elliott had testified the impressions at the scene came from a 10.5 and and 11 size shoe and the treads were not worn.

At the time, Manley was incensed that investigators wanted to examine his shoes. He felt that he and his children were being unfairly targeted in the investigation. Manley died late last year of natural causes.

One question investigators had: how would people living in the same home not awaken to the sound of gunfire when their loved ones were shot? Scheiderer said agents concluded a suppressor had been used to muffle the sound.

The agents had little, if anything, to go on in the early stages of the investigation, Scheiderer said. Agents received more than 1,000 tips from psychics, prison inmates and even from the death of Prince. Prince died of a drug overdose on April 21, 2016. Scheiderer said all of the tips were investigated and none were fruitful.

“Unfortunately, when you have a big case like this, people want to interject themselves into the investigation. And this case was just a magnet for that,” Scheiderer said.

Scheiderer testified that family members of the Rhodens told them that security cameras were present on Chris Rhoden Sr.’s property. However, the cameras and DVR recording the footage were missing.

Surveillance video was also located from a home on Union Hill Rd. and Left Fork Rd. The times were off but one showed what appeared to be two vehicles traveling one behind the other with headlights on. The video was dark and the vehicles couldn’t be seen. The first video recovered from Union Hill Rd. showed what appeared to be a vehicle traveling along Union Hill Rd. at 1:36 a.m. on April 22, 2016. Prior testimony indicated Chris Rhoden Sr. died shortly after 11 p.m. on April 21. Another camera angle captured at 2:00 a.m. on April 22 showed a vehicle traveling toward the crime scenes. A third video camera captured footage at 2:41 a.m. showed headlights from two vehicles — one traveling behind the other.

That footage is important to the state because prosecutors say Jake Wagner told them he and his father, Billy Wagner, and George Wagner IV, drove Chris Rhoden Sr.’s truck — along with their truck — away from the crime scenes on the night of the murders.

The vehicles were captured at various times on surveillance video the night of the murders — including at 3:19 a.m. traveling back to Union Hill Rd. toward the crime scenes. However, the make and models of the vehicles cannot be seen. Surveillance footage from Left Fork Rd. at 2:29 a.m. captured one vehicle driving toward’s Kenneth Rhoden’s home. At 3:10 a.m., another video showed a vehicle traveling away from Kenneth Rhoden’s home.

During the jury view, jurors were driven along a number of roads in what seemed like a never-ending loop. Special prosecutor Angie Canepa said the jurors were taken on the route the killers took, according to Jake Wagner, the night of the crimes. Prosecutors presented the video camera evidence to corroborate Wagner’s testimony, which will come later in the trial.

Agents also determined through the video footage that Angela Wagner had purchased two pairs of those shoes in the days before the massacre. Wagner is expected to testify to that fact when she takes the stand later in the trial. She has already pleaded guilty to her role in the killings.

Scheiderer detailed how family members of the Rhodens and Hannah Hazel Gilley provided DNA samples and their cell phones to assist in the investigation. However, he said one person interviewed did not: Jake Wagner. Scheiderer said Jake Wagner was interviewed by agents on May 13, 2016 and provided a DNA sample but would not provide his cell phone to agents.

Scheiderer said he later learned that Wagner’s hair, which appeared dark brown to black in an interrogation video, was actually much lighter. During opening statements, Canepa told jurors that Wagner had dyed his hair before the homicides so he would look like a character in the movie The Boondock Saints. A scene from that movie depicts two brothers firing guns.

On cross-examination, George Wagner IV’s attorney John Patrick Parker questioned Scheiderer about the fact that the trailer where Dana Rhoden and her children, Hanna May Rhoden and Chris Rhoden Jr., were killed was in Scioto County, not Pike County. Wagner’s attorneys have said those cases should be tried in that county.

Scheiderer responded that the killings were part of a continuing course of conduct under Ohio law so they could be tried in that county. However, Parker said the Ohio Constitution states crimes must be tried in the county where they were committed. Scheiderer said he learned after the Wagners had been indicted that Dana Rhoden’s trailer was in Scioto County, just over the Pike County line.

Scheiderer is expected to return to the stand throughout the trial.

The investigation has been called the largest in Ohio history.

Testimony in the trial was canceled Thursday because of an illness. It is expected to resume Friday morning at 9 a.m.