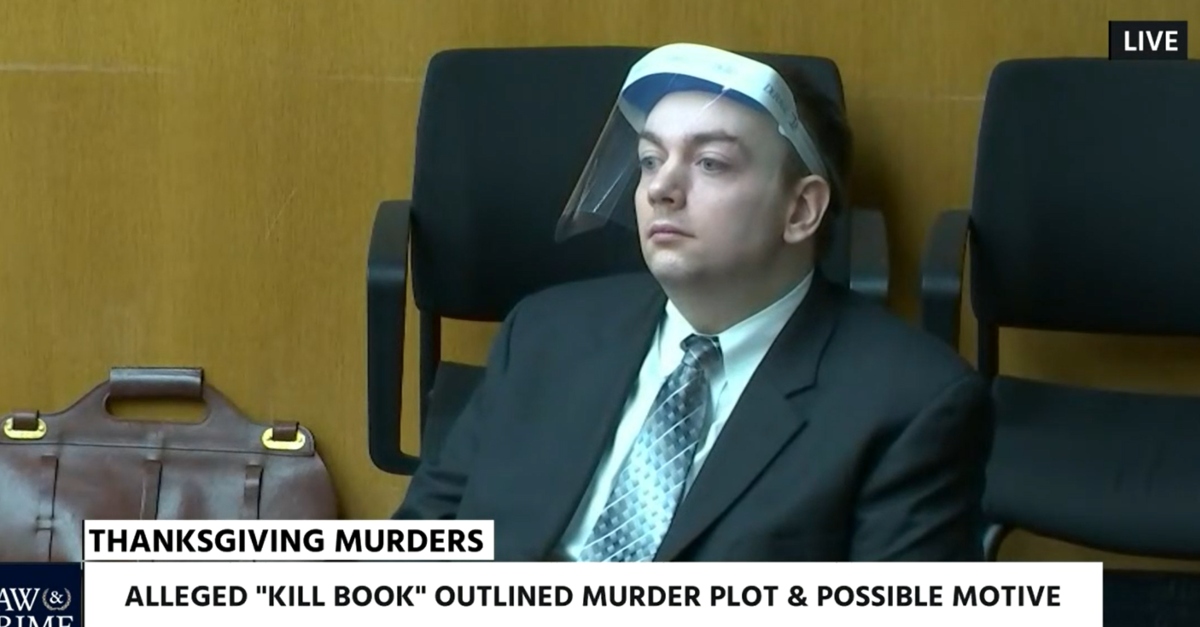 Joel Michael Guy Jr., 32, was found guilty in the 2016 murders and dismemberment of his parents, Tennessee couple Joel Michael Guy Sr., 61, and Lisa Guy, 55. Prosecutors said that the defendant killed the victims after the family had one final Thanksgiving get-together at their home.

At closing arguments on Thursday, Knox County Assistant District Attorney Hector Ian Sanchez said the murders happened on about Saturday, November 26, 2016. Guy Jr. killed his father first, then ended his mother’s life when she returned home, the prosecutor said. He then dismembered the bodies, and attempted to dissolve them in corrosive liquid, officials said.

As indicated in witness statements and video, Lisa Guy’s decapitated head was placed in a boiling pot. The father sustained at least 42 wounds, and the mother had at least 31. The crime scene was discovered after a work supervisor of Lisa’s called 911 for a welfare check because it was unlike the victim to no-show work.

#ThanksgivingMurders – Just horrible to know that the defendant’s mother’s head was in this pot on the stove. (You will not see the contents). #JoelGuyJrTrial @LawCrimeNetwork pic.twitter.com/4q3iDUweaX

The motive: money. The victims were planning to financially cut off the defendant, according to testimony. There was a $500,000 life insurance policy on the life of Guy Sr., prosecutors said. Lisa was the first beneficiary in that event that he died. Guy Jr. was the second; he has still been pursuing the insurance funds.

At the time of his arrest, sheriff’s deputies described the defendant as a Louisiana resident who dropped out of Louisiana State University. Angela Crane, Guy Sr.’s biological daughter and the defendant’s half sister, said at trial that the couple planned on moving from their home, and that they said it was time for Guy Jr. to stand on his own two feet.

Beside the money issues, however, there was little if any inkling of friction between defendant and victims. The Guys were a blended family: Jr. was the only child of both Sr. and Lisa. In addition, Guy Sr. had children from a previous relationship, but Lisa was described as a loving stepmother to them. Crane described both of the parents as among her best friends. She talked to her father on Sundays, if not everyday. She, her father, Lisa, and sister Michelle had a group text thread going.

Judging by the state’s account, the murders were not a spur of moment thing; there was extensive evidence of premeditation. Guy Jr. planned for at least weeks ahead, Sanchez said.

For example, the defendant purchased muriatic acid and food-grade hydrogen peroxide on the Nov. 7, in this statement of events. Other items purchased around this time were Clorox wipes. On November 18, 2016, Guy Sr. purchased extension cords and a timer from Home Depot. Sanchez suggested that the timer was used in an attempt to create a fire at the murder scene for when after the bodies were dissolved.

Other purchases included a bleach sprayer, a KA-BAR Marine style knife, and bins in which to dissolve the bodies. The defendant also left behind notes planning his crime, they said.

#ThanksgivingMurders – A dog can be heard barking, howling inside the house. We know from the notebook found in the defendant’s room the note said to kill the dog but then crossed that out. #JoelGuyJrTrial @LawCrimeNetwork pic.twitter.com/0ZiTfdWza3

In closing arguments, Defense lawyer John Halstead described the defendant as outgoing, friendly, and happy that weekend. That was in contrast to the numerous wounds to the victims: That was anger and rage.

In a phone call to friend and roommate Michael McCracken, the defendant never admitted to killing everybody, said the defense.

Guy: I mean I don’t know that there is anything to say…tell me I’m a fucking idiot. Tell me why did I do this? pic.twitter.com/sFANzimFRq

#ThanksgivingMurders – McCracken described #JoelGuyJr as “socially awkward” and said he really didn’t have friends. He said sometimes he would stay in his room for days at a time. @LawCrimeNetwork pic.twitter.com/2XDHBmsIgN

Halstead asserted that the state did not prove the handwriting in the planning notebooks was from the defendant. He also argued it was unclear how Guy Jr. sustained injuries to his hands. It was also uncertain what the defendant purchased at an Ace Hardware on November 7, 2016, the defense said.

#ThanksgivingMurders – Jury is seeing photos of #JoelGuyJr after his arrest. He has pretty significant cuts on his hands. @LawCrimeNetwork pic.twitter.com/yvbdc7DMvK

Though Guy Jr. was arrested in Louisiana, the plan was always to return there all along, the defense said. He was not fleeing or hiding, Halstead asserted.

The defendant’s DNA was on the notebook and it was found in his backpack, Sanchez said in the state’s rebuttal.

Guy Jr. did not testify. He faced an automatic life sentence with the possibility of parole after 51 years if convicted. The state did not the pursue the death penalty, even though the defendant asked that it be considered in the event he was found guilty.