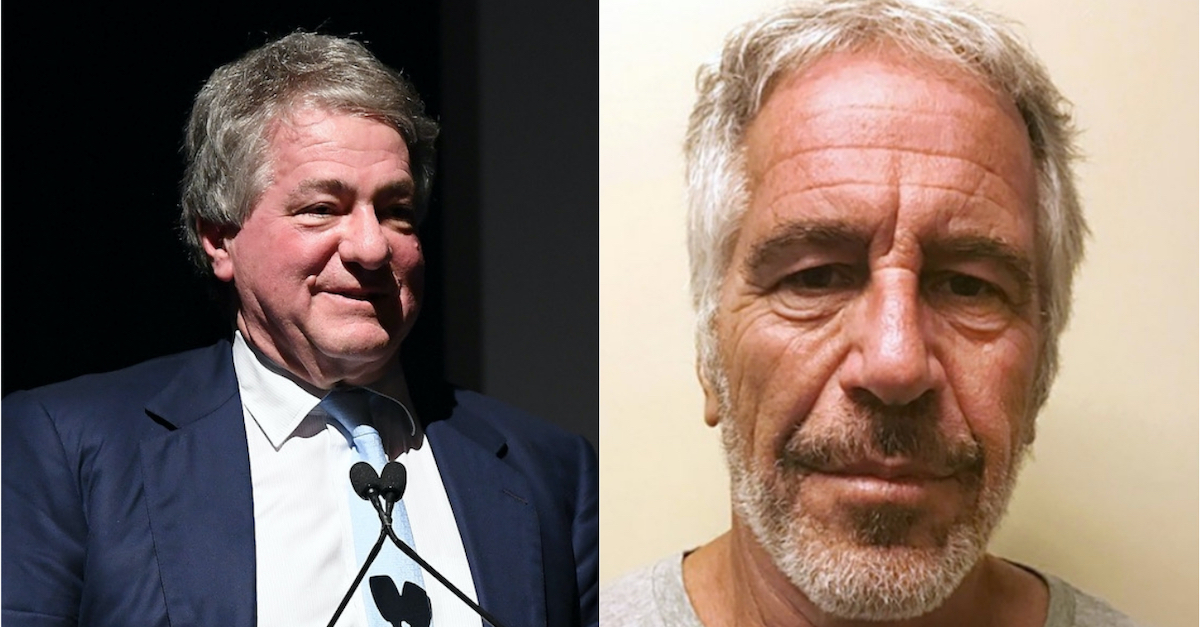 Along with Black, Epstein’s estate and its executors are also named as defendants.

Black stepped down as CEO of the multi-billion dollar hedge fund Apollo Global Management amid scrutiny of his ties to Epstein more than a year and a half ago, in March 2021. He has faced lawsuits from two women since that time, the earlier being a still-active case filed by a Russian model named Guzel Ganieva.

The latest case comes from the same law firm behind that suit: Wigdor LLP, whose client Cheri Pierson says she was a single mother from New Jersey pulled into Epstein’s orbit in 2000.

Some two years later, Pierson says, Epstein introduced her to a businessman whom she now identifies as Black. She claims that the hefty financier treated her like a “rag doll” in an alleged sexual assault on the massage table of Epstein’s townhouse.

Her attorney Jeanne Christensen credited Pierson’s ability to step forward with her allegations to New York’s passage of a new law removing the statute of limitations hurdle to the complaint.

“Thanks to the passage of the Adult Survivor’s Act, survivors of sexual violence like our client Ms. Pierson can seek the justice they deserve no matter how many years ago their trauma was suffered,” Christensen wrote. “We look forward to holding Black and Epstein’s estate accountable for their appalling unlawful conduct as alleged in the complaint by our client.”

The 30-page complaint lays out a detailed and graphic portrait of events said to have taken place roughly two decades ago.

“Black’s brutal attack took place in a secluded and private area where no one could see Black or hear Ms. Pierson scream,” the complaint states.

Pierson claims that, saddled by financial setbacks and credit card debt, a Ukrainian woman offered to introduce her to a rich man and then passed on her number to a woman with a British accent, whom she now identifies Ghislaine Maxwell.

Through Maxwell, Pierson claims, she was introduced to Epstein, whom she quotes describing himself as a “massage slut.” Prosecutors say that Epstein ran a pyramid scheme of abuse where he paid girls and young women to massage him and receive a finder’s fee to recruit others like them.

Pierson’s lawsuit mirrors that story — and she said that Epstein made a “vulgar and disgusting” remark to her after the Sept. 11th attacks on the World Trade Center that stood out in her memory.

“Specifically, Epstein began talking about how bad it was for foreign models who had come for Fashion Week and now could not leave,” the lawsuit states. “He said that the modeling agencies had stranded these women with no help or money. Disgustingly, Epstein remarked that these young girls, mostly teenagers, were in such dire financial straits that they would take $100 to get ‘fucked up the ass.'”

When Pierson gave massages to him, she said, Epstein masturbated and wanted her to perform oral sex on him. But she refused, she says.

According to the lawsuit, Epstein seized upon Pierson’s ambition to open a skincare line by introducing her to Black.

“Wanting to please the wealthy businessman who Epstein claimed was inclined to help her with the skincare product, Ms. Pierson engaged him in meaningless chit chat that at one point included commentary by both of them about the artwork on the wall in the hallway,” the lawsuit states. “Eventually, they heard people who had been in the main hallway exit the house and Black said it was time to go up.”

Describing herself as powerless to escape what the lawsuit estimates as a 6-foot-4, 300 pound financier, Pierson accused Black of a harrowing attack.

“At 125 pounds and 5 feet 8 inches and in his total physical control, Ms. Pierson had no ability to escape the physical power of Black’s massive body,” the lawsuit states. “When Black then placed his mouth on her vagina and began biting her, Ms. Pierson experienced excruciating pain. With the top of her head precariously inches above the ground and her legs bound to his shoulders, she could only see the lower wall closest to her. She had no idea what exactly he was doing to her to cause the tearing pain she felt or what acts he engaged in specifically during the violence. Ms. Pierson was in agony and had never experienced anything like that before.”

“These latest allegations from the Wigdor firm are categorically false and part of a scheme to extort money from Mr. Black by threatening to destroy his reputation,” Estrich said. “This campaign began nearly 18 months ago when Wigdor client Guzel Ganieva filed three separate complaints asserting false and defamatory claims against Mr. Black.  These claims were completely contradicted by objective, contemporaneous evidence, resulting in Wigdor filing (and then discarding) phony legal theories not once, not twice, but three times.”

Calling the allegations a “serial abuse of process,” the attorney added: “”We intend to defeat these baseless claims, and to pursue all of our remedies to hold the Wigdor firm legally accountable for their abusive conduct and misuse of the courts.”

A federal judge previously dismissed a lawsuit by Black alleging a plot to destroy his reputation.