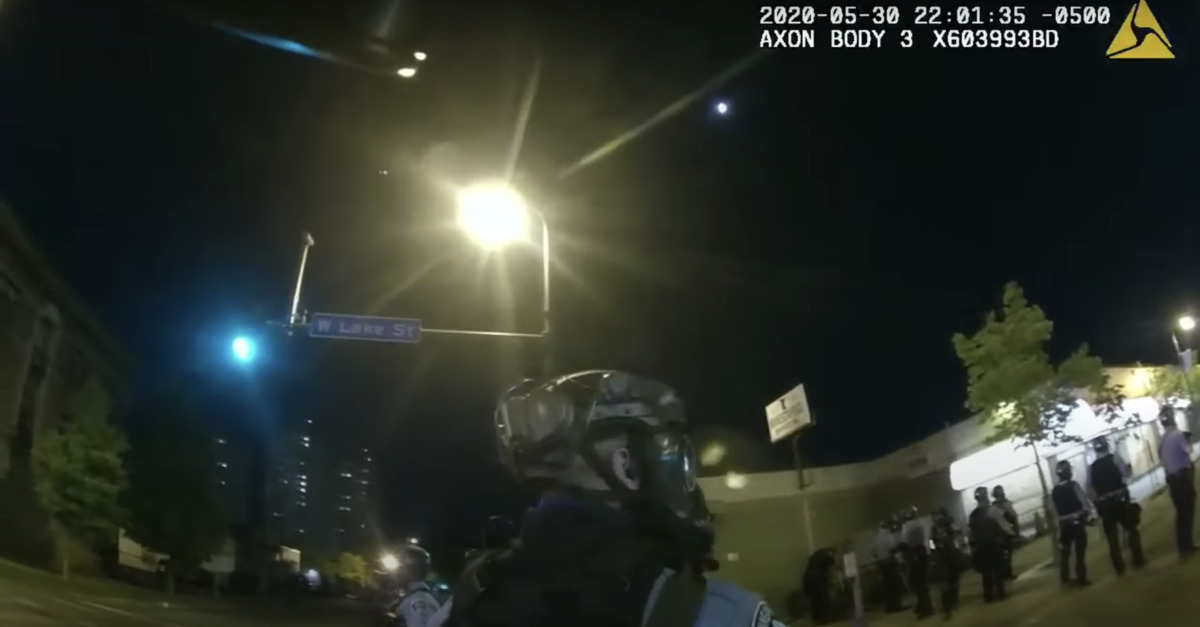 An investigation is underway after a commander and lieutenant with the Minneapolis Police Department were recorded on body-worn camera footage describing “hunting” people and suggesting white people do not engage in looting during Black Lives Matter demonstrators at the height of protests in response to the killing of George Floyd last spring.

In one of the videos, captured five days after Floyd’s murder, MPD Lieutenant Johnny Mercil allegedly responds to another officer’s offer to “flank” racial justice protesters by implying that only non-white people were responsible for widespread theft and property damage.

“I got no problem with that; I’d love to scatter ’em but it’s time to fuckin’ put people in jail and just prove the mayor wrong about this ‘white supremacists from out-of-state,'” the lieutenant said, apparently in reference to disproven comments made by Minneapolis Mayor Jacob Frey (DFL). “Although this group probably is predominantly white, because there’s not looting and fire.”

An off-camera officer responds to the race-based commentary by saying: “They’re from Minneapolis and they’re all white.”

The footage begins with Mercil approaching an officer and saying, “Fuck these media.”

In another clip, from the early morning hours of May 31, 2020, MPD Commander Bruce Folkens allegedly responds to an officer’s comment about “a busy night” by expressing happiness about a shift in enforcement priorities and the prospect of a wholesale round-up.

“It’s nice to hear for–that we’ve moved to–tonight it was just nice to hear ‘We’re gonna go find some more people,’” the commander says. “Instead of chasing people around, we’re going to hunt. You guys are out hunting people now. It’s just a nice change of tempo.”

“Yep,” the other officer responds. “Agreed.”

“You have to move on,” the other officer says as someone laughs. “Move forward.”

The late May 2020 conversations were released on Tuesday and posted online by the Minnesota Reformer, which first covered the footage.

That story by journalist Deena Winter documents additional instances where MPD officers mocked protesters and members of the press and “celebrated direct hits with their rubber bullets.”

Mayor Frey’s office did not respond to repeated press inquiries by Law&Crime. An official with the City of Minneapolis said the city wouldn’t normally comment on such matters, stressing that the mayor’s office and the MPD were the relevant agencies involved who should comment here.

That same city official suggested that Minneapolis City Council President Lisa Bender would be inclined to address the matter. Neither Bender nor any other member of the body has personally addressed the body-worn camera footage on their social media accounts, but Bender’s Twitter account retweeted a critical comment by Minneapolis mayoral candidate Kate Knuth.

“The Mayor has full authority of the Police Department under our current charter,” Knuth tweeted early Tuesday afternoon. “He can act right now and take necessary steps to make it clear that this violent, toxic culture is not acceptable. The mayor’s office is silent on this and, therefore, complicit.”

Roughly two hours of body-worn camera footage from the night in question were made public by St. Paul-based attorney Eric Rice, the lawyer confirmed to Law&Crime in a phone call. Those videos were courtroom exhibits from the attorney’s recent and successful representation of Jaleel Stallings, an Army veteran who was fired on with rubber bullets by MPD officers in an unmarked van during an interaction with protesters on the night of May 30, 2020.

Stallings fired warning shots but dropped his weapon after he realized he was shooting at police. A jury acquitted Stallings on all charges in July of this year. Meanwhile, the Hennepin County Attorney’s Office fought an unsuccessful battle to keep those videos from being released.

Law&Crime reached out to the Hennepin County Attorney’s Office for comment.

The MPD, however, did respond by noting that the release of the footage has prompted an inquiry within the department.

“There’s an ongoing internal investigation looking into those issues and as such MPD is unable to comment,” an MPD public information officer told Law&Crime in a brief phone call.