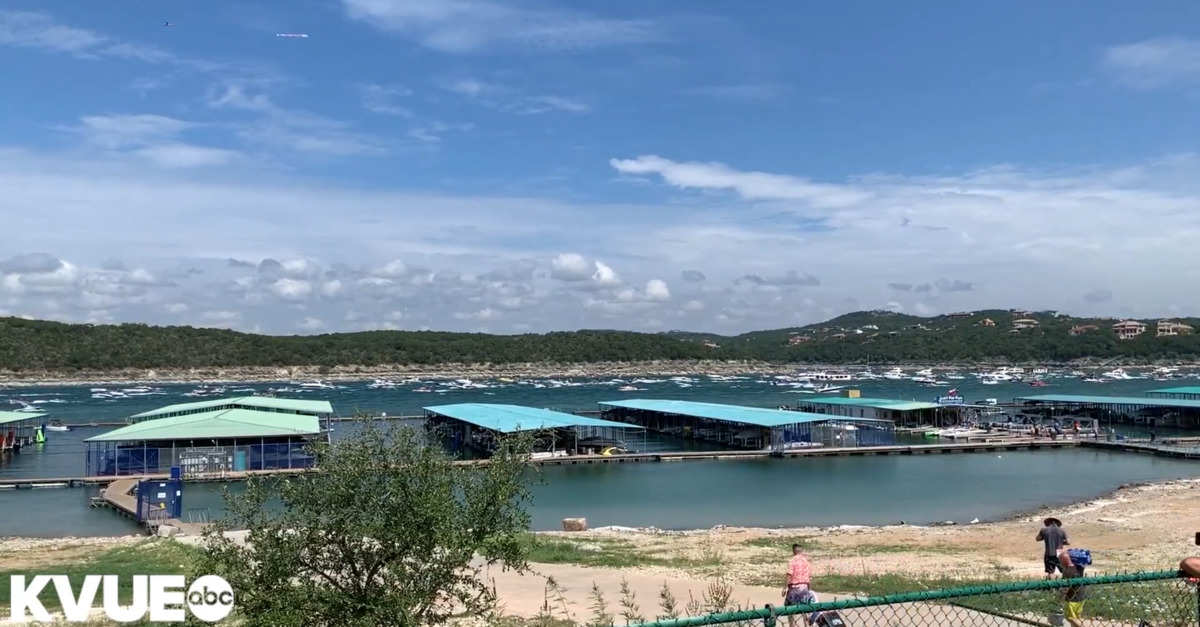 Police in Austin, Texas say they have received several 911 calls about boats sinking into the waters of a large local lake during a boat parade being held in support of President Donald Trump.

According to local CBS affiliate KEYE-TV, the Travis County Sheriff’s Office (TSCO) has received numerous distress calls from sinking boats–apparently all along the route of the aquatic parade.

Other local media confirmed the sinkings:

BREAKING: Several boats have sunk during a boat parade in support of @realDonaldTrump on Lake Travis, @TravisCoSheriff confirms. Crews have responded to many boats in “distress.” @KVUE

Our coverage from earlier today: https://t.co/cxR08hrxYa

According to citizen journalists who took stock of live updates from EMS response crews via the aptly-titled Citizen app, the parade participants were “unruly” and “not adhering to safety measures.”

Online commenters made light of the events:

Okay, who gave Antifa the nuclear submarines? Fess up https://t.co/LJkhQM0n0v

It’s like the Spanish Armada but with middle-aged white people in pink golf shirts, and coolers full of Coors Light.

Upwards of at least 20 people were in the water as a result of the boats sinking, according to first responder reports. Fire crews, EMS divers and other rescue swimmers were called to conduct rescue missions. As of this writing, at least five boats appear to have been partially or fully submerged–but authorities have yet to provide an exact number.

The event, which was held to rally support for the president, was briefly all smiles until the first distress calls came in at around 12 p.m. Central Standard Time.

Everything really is bigger in Texas! Take a look at the hundreds of boats gathered on Lake Travis right now for a boat parade honoring President @realDonaldTrump! Senate District 24 supports our President! #TrumpBoatParade #txlege pic.twitter.com/zvZHT8EjtO

Crowds of viewers came out in the masses today at #LakeTravis for the #Trump Boat Parade to support the @POTUS ahead of the November #election @KVUE pic.twitter.com/DHCziqkMDz

Held on Lake Travis, the human-constructed reservoir on the Colorado River, the “Trump Boat Parade” was advertised on Facebook and respondents signaled a high level of interest.

At noon on the day of the parade, 4 parachute jumpers will be jumping out of a helicopter with smoke and flags flying! They will be on the south side of the lake between Starns Island and Emerald Point. Two of which are military veterans and one is an amputee. Thank you for your service to our country and for volunteering for this event! We honor you!

“Boats of all shapes and sizes are encouraged to participate. Decorate your boats in patriotic colors and fly as many Trump flags as she can handle,” the event organizers advised. “Let’s really make a statement!”