‘I Was Pretty Uncomfortable’: Alternate Juror Says Derek Chauvin Stared Her Down in Court 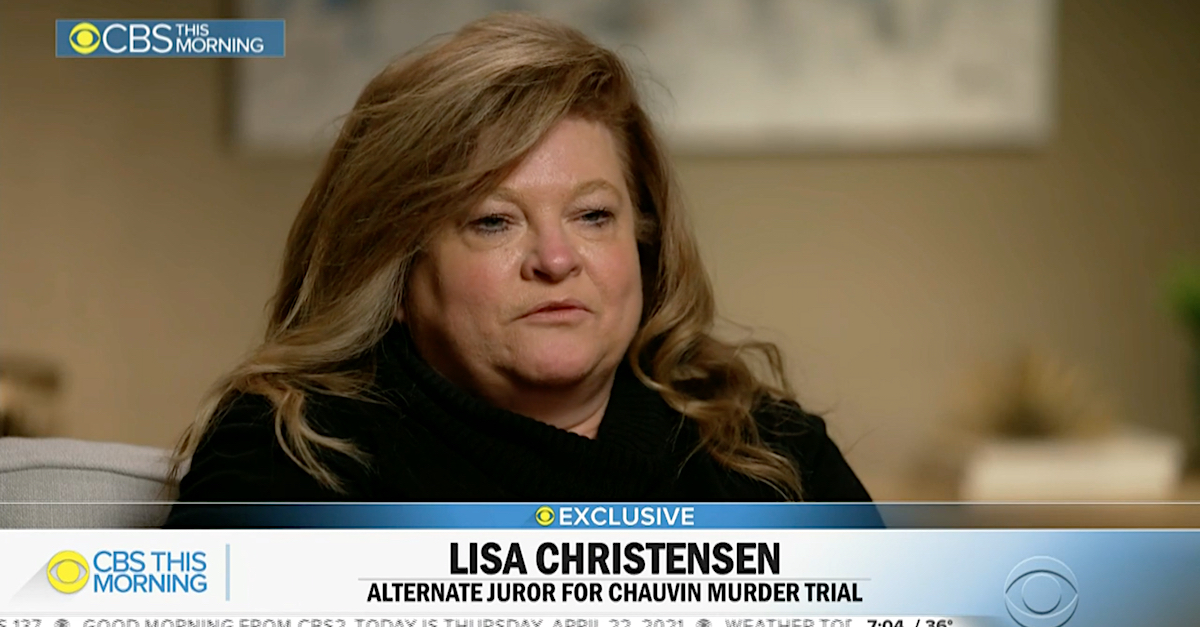 An alternate juror, who ultimately did not cast a vote to convict Derek Chauvin of murdering George Floyd, said she believes the deliberating jury arrived at the correct verdict.

“I felt he was guilty,” Lisa Christensen told CBS This Morning’s Jamie Yuccas in an exclusive interview. “I didn’t know if it was going to be guilty on all counts, I would have said guilty.”

Christensen said “the prosecution make a really good, strong argument” and that Dr. Martin Tobin, the prosecution’s pulmonary expert, “was the one that really did it for me.”

“He explained everything,” Christensen said of Tobin.  “I understood it down to where he said, ‘this is moment that he lost his life,’ um, really got to me.”

When asked about the defense, Christensen was not impressed.

“I don’t think they had a good impact,” Christensen said of Chauvin and attorney Eric J. Nelson. “I think he overpromised in the beginning and didn’t live up to what he said he was going to do.”

She said she believed that Chauvin stared her down in court — making her “uncomfortable.”

“Every time I would look up, he was right in my vision, so we locked eyes quite a few times, and I was pretty uncomfortable,” Christensen said.

Christensen said other officers were “following” Chauvin’s lead and that Chauvin didn’t take witnesses seriously when they warned him he was killing Floyd.

Christensen also said she feels “really bad” for Darnella Frazier, the teen who recorded video of what was occurring.

“I commend her on taking the video because without her, I don’t think this would have been possible,” Christensen said.

She added that she had not seen the video “in its entirety” until she was in court. “It was emotional; I think my eyes teared up a couple of times.”

“I just don’t understand how it got from a counterfeit twenty dollar bill to a death,” she concluded. “It kind of shocks me.”

EXCLUSIVE: An alternate juror in the #DerekChauvinTrial sits down with @jamieyuccas.

Lisa Christensen did not have a role in the verdict, but she sat through every minute of the trial.

She says even though she wasn’t part of the deliberations — she came to a decision. pic.twitter.com/oREghd4OKm

[image via CBS This Morning screengrab]