Expert Pulmonologist: Derek Chauvin’s Actions Against George Floyd Were Like ‘a Surgeon Had Gone in and Removed the Lung’ 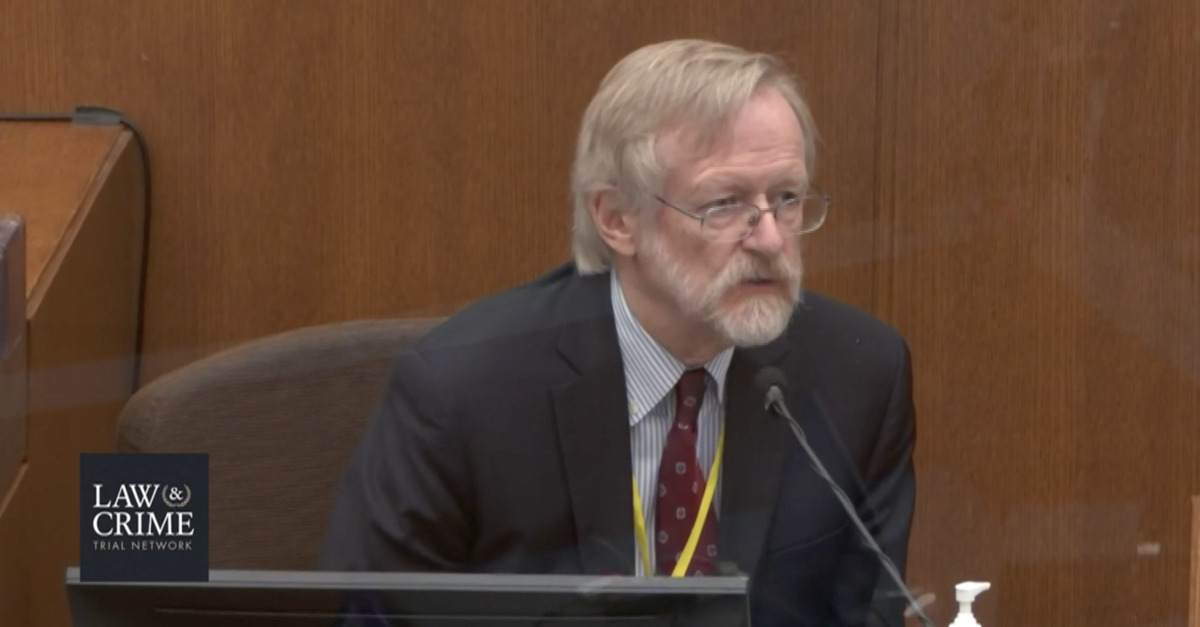 Tobin spent most of his testimony illustrating, in various ways, the various causes that led to George Floyd‘s shallow breathing—implicating Chauvin and his fellow officers time and time again.

He testified that Chauvin’s left knee was on Floyd’s neck some 90-plus percent of the time during the first five minutes or so of the fatal incident last May and that occasionally the officer’s right knee deviated from being pressed into Floyd’s arm or chest.

“Officer Chauvin’s [right] knee is on Mr. Floyd’s back 57 percent of the time,” Tobin told the attentive jurors—most of whom were taking notes as he spoke. “The reason I’m not able to say for the 43 percent is because I don’t have a good view.”

Watch a clip of Dr. Tobin’s testimony below

The pulmonologist went on to say that if you’re trying to make a distinction as to whether Chauvin’s right knee was pressed into Floyd’s arm or “rammed into” Floyd’s left chest, “from the point of view of breathing, the effects are extremely similar.”

The medical doctor from Chicago with a marked Irish accent led the jury in several exercises regarding the anatomy of their own chest and neck—eventually prompting the defense to call a sidebar which resulted in Judge Peter Cahill counseling jurors that they didn’t have to follow along and participate in the hands-on lecture.

Most of the jurors, however, took part in those self-examinations. Three jurors, on the other hand, did not follow along.

This isn’t testimony through a Q&A so much as Dr. Tobin is teaching a class. The jury isn’t just learning but they are experiencing the testimony, experiencing what happened to George Floyd. When we read the jury pool it will be interesting to hear if the jury is following him https://t.co/Ld84UGtDv2

“The way they are pushing down on the handcuffs combined with the street,” Tobin explained, referring to a diagram of the arrest attempt gone wrong. “It’s like [Floyd’s] left side is in a vice. It’s being pushed in, squeezed in, from each side.”

The handcuffs “totally interfere with central features of how we breathe,” he added.

Tobin distinguished bucket handle vs. pump handle breathing—two different ways that people’s chests expand with air during inspiration; side-to-side and front-to-back, respectively. He then explained that both breathing functions occur at the same time and that if you don’t have one occurring then you cannot properly breathe.

“They were forcing his left wrist into his chest and you have to keep in mind that the opposite side of this was the street,” Tobin said. “So, he couldn’t exert his pump-handle. He couldn’t do any front-to-back movement. So, basically, on the left side of his lung, it was almost like a surgical pneumonectomy, it was almost to the effect that a surgeon had gone in and removed the lung.”

The prosecution also showed the jury several still photographs of the well-known video in which Chauvin can be seen restraining Floyd as he lay dying.

“The officer is holding Mr. Floyd’s left hand which is being pushed in against his chest,” Tobin noted. “Officer Chauvin’s knee is coming in and pressing against his side as well. So his ability to expand his left side here is enormously impaired. His whole left arm is being pulled over so it’s also prohibiting him from expanding his right side.”

The upshot of these combined actions, the medical expert explained, was that while his testimony up to that point had largely focused on Floyd’s ability to breathe from his left lung, his right-side breathing was also impaired by the police department’s actions that day.

“There’s just no way he’s going to be able to expand,” Tobin said when referring to a photograph of Floyd trying to lift himself up by the tips of his fingers. “To a physiologist this is extraordinarily significant. This tells you he has used up his resources and he is trying to breathe with his fingers and his knuckles.”

Doctor Tobin “a healthy person subjected to what #GeorgeFloyd was subjected to, would have died”