Donald Trump vs. Antonin Scalia: One Says No, One Said Yes on First Amendment Right to Burn the Flag 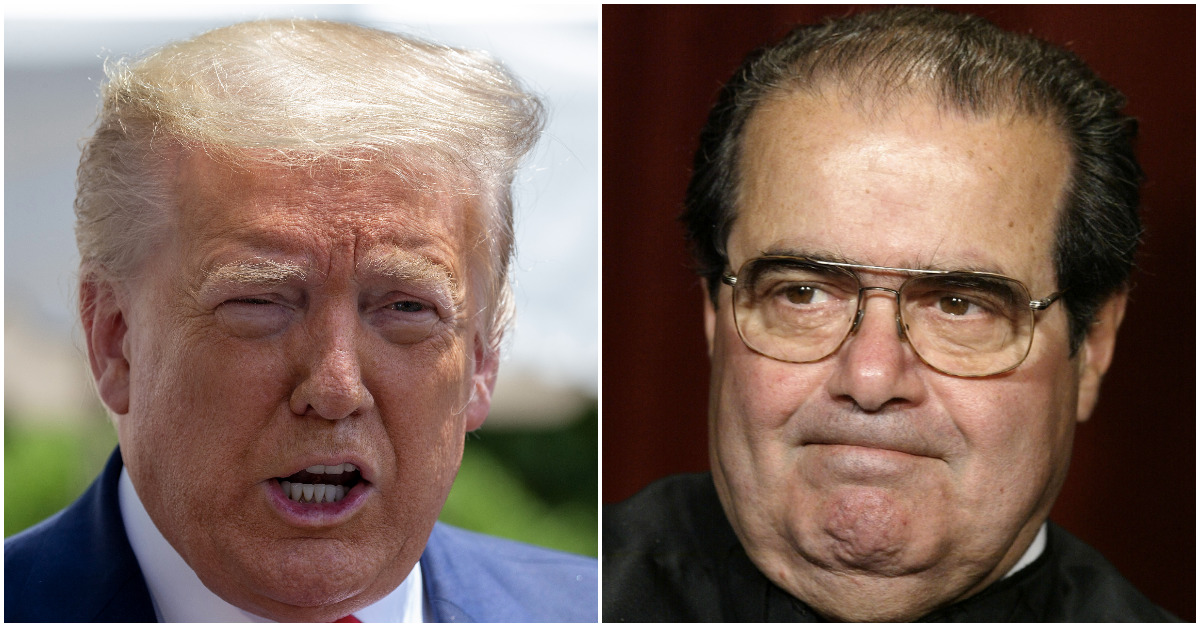 President Donald Trump wants authorities across the country to pass prohibitions that would ban the currently constitutionally-protected act of burning the American flag. Trump made the suggestion during a contentious Monday phone call with governors of several states.

“They wanted to climb up flag polls in Washington in order to burn flags, but we stopped them,” Trump said at one point during the widely reported call during which he called several governors “jerks.”

“If you wanted to try and pass a very powerful flag-burning statute, anti-flag burning,” the president continued, “I hope you do it because we will back you 100 percent, all the way. I hope some of you do it.”

Underlying Trump’s message was a perception that the Supreme Court would endorse such laws due to its current makeup. “Flag burning is a disgrace,” Trump said. “We have a different court. And I think that It’s time to review that again.”

However, were a flag burning statute to make its way to the high court right now, it’s likely the decision to reject such a theoretical anti-flag-burning law as a violation of the First Amendment would be at least 6-3 or even 7-2.

The Roberts Court is known to be one of the most pro-First Amendment iterations of the nation’s high court in American history. There are no indications based on recent cases decided by the Supreme Court that its support of expansive Free Speech protections has eroded.

Flag-burning has been expressly legal in the United States since the landmark and watershed First Amendment cases of Texas v. Johnson and U.S. v. Eichman, decided in 1989 and 1990, respectively.

In 1984, First Amendment activist and member of the Revolutionary Communist Party Gregory “Joey” Johnson was arrested for burning the American flag during the Republican National Convention to protest Ronald Reagan’s foreign policy in Latin America. The protest was performed just outside of Dallas City Hall; no one was hurt during the spectacle.

The Supreme Court, in an odd grouping, ruled in Johnson’s favor. A 5-4 majority opinion found that Johnson’s treatment by the Dallas police and prosecutors violated his First Amendment rights.

Congress, angry at the ruling, quickly reacted and passed the Flag Protection Act of 1989. Johnson and his friends organized again. They staged a flag-burning protest two days later on the steps of the U.S. Capitol where they set fire to three American flags while chanting and popularizing the phrase “burn, baby, burn.”

The issue went to the U.S. Supreme Court. Again.

Justice William Brennan, who wrote majority opinions for both cases, in Eichman opined that the government had sought to criminalize the conduct of flag burners based on the content of their message–which is protected as a form of symbolic speech–and that content-based restrictions on speech violate the U.S. Constitution.

The Act proscribes conduct (other than disposal) that damages or mistreats a flag, without regard to the actor’s motive, his intended message, or the likely effects of his conduct on onlookers. By contrast, the Texas statute expressly prohibited only those acts of physical flag desecration “that the actor knows will seriously offend” onlookers, and the former federal statute prohibited only those acts of desecration that “cas[t] contempt upon” the flag.

Although the Flag Protection Act contains no explicit content-based limitation on the scope of prohibited conduct, it is nevertheless clear that the Government’s asserted interest is “related to the suppression of free expression,” and concerned with the content of such expression.

The judgments in both Johnson, which invalidated 48 state laws against flag desecration, and Eichman, which invalidated the broader federal prohibitions, grouped three of the court’s legal liberals (Marshall, Brennan, and Blackmun), eventual moderate Anthony Kennedy, and conservative movement folk hero Antonin Scalia together to form a majority. Notably, famed liberal justice John Paul Stevens voted to uphold the bans on flag burning in each instance.

Though Scalia did not author either opinion or provide what would have been a likely concurrence for the ages explaining his vote, he later remarked on the historic nature of his votes to allow flag-burning as constitutionally-protected speech.