‘Karen’ Flips Out on ‘Democratic Pigs’ in Trader Joe’s, Says Being Asked to Wear a Mask Is Harassment (VIDEO) 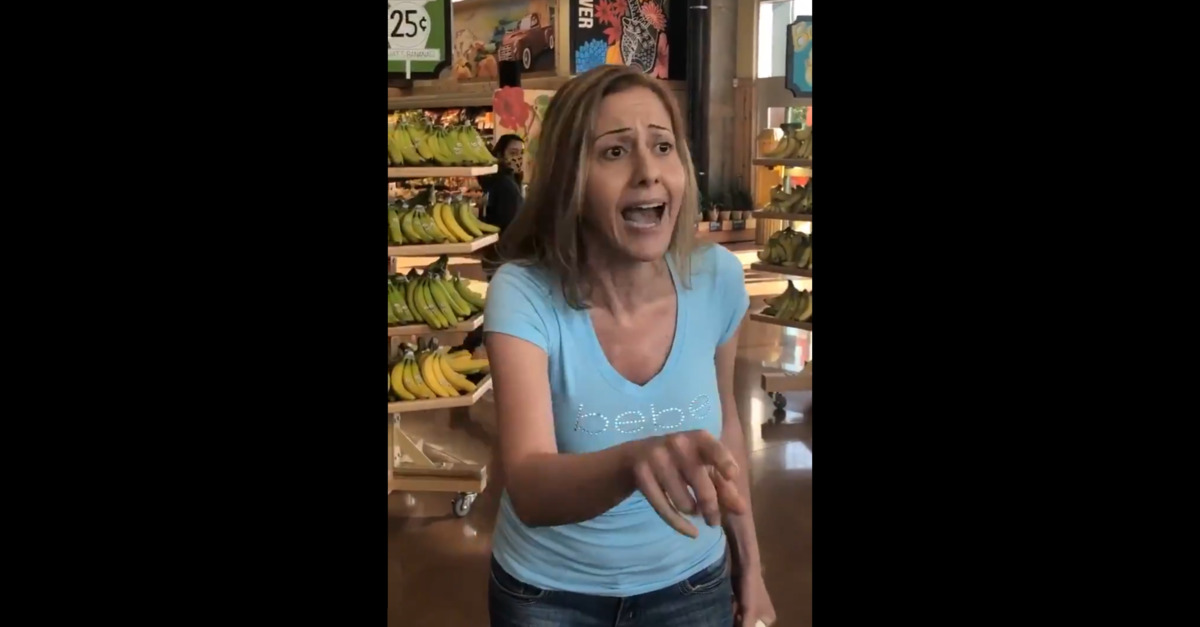 They call her the “Karen of the San Fernando Valley.”

In a viral video shared by Suffolk County District Attorney Rachael Rollins, a woman can be seen shouting at Trader Joe’s employees in North Hollywood after being asked to wear a mask. The original video was shared by Los Angeles-based actor D. Giles. See his Twitter thread with multiple videos here.

“You’re a fucking bitch!” the woman screamed at one worker while complaining about being “cussed out” by another worker over her refusal to wear a mask.

“Do you think this is okay?” the woman asked as she slammed down a shopping basket before making her way out of the store.

On her way out, she declared:

You’re fucking Democratic pigs, all of you!

The person recording the video narrated to note: “This is day one. This is opening day of Trader Joe’s in North Hollywood. This is Karen.”

Various additional videos of the incident were also shared online. The woman said that the people asking her wear a mask were harassing her and violating federal law.

“Yes, I have a breathing problem,” the woman said in one such video. “My doctor would not let me wear a mask. So, anyone harassing me to wear a mask, you guys are violating federal law. You get that? Get that on camera.”

“Watch her reaction to being asked to wear a mask at Trader Joe’s,” Rollins, a prosecutor in Massachusetts who styles herself as a progressive, commented on the incident. “This level of outrage is tolerated by our society in that instance. What is the commensurate level of outrage for witnessing your people targeted, murdered & brutalized? Asking for a friend.”

Someone who claimed to have witnessed the incident unfold suggested that the woman–who was wearing a light blue Bebe shirt, resulting in “Bebe” to trend on Twitter alongside “Trader Joe” on Saturday–was on the hunt for controversy in the first place.

“She took her mask off after she entered the store, and walked around with a basket, but not putting anything into it,” they wrote. “Instead she was roaming the aisles and getting up in people’s faces, getting as close as possible, waiting for someone to inevitably tell her to put her mask back on. And when a dude finally did – which didn’t take long I’m guessing, because she was being super aggressive – she lost it.”

The alleged witness claimed to have been at the cash register “when the shit went down” and described the flareup and said the woman “put her plan into action” with the clear intent of making “a scene.”

“A manager was already on her way over to her because it was obvious what was going on, and her to leave,” their post went on, “I recognized the manager from one of the other Valley locations, and she demonstrated a level of professional patience and calm in attempting to de-escalate that was award-worthy.”

“The predictable screaming rant ensued,” the apparent eyewitness post continued–noting that the woman cited a statute and her First Amendment rights after being asked to leave the store for health and safety reasons.