All Four Cops Involved in George Floyd’s Alleged Murder to Face Charges; Family Says ‘This Is a Bittersweet Moment’ 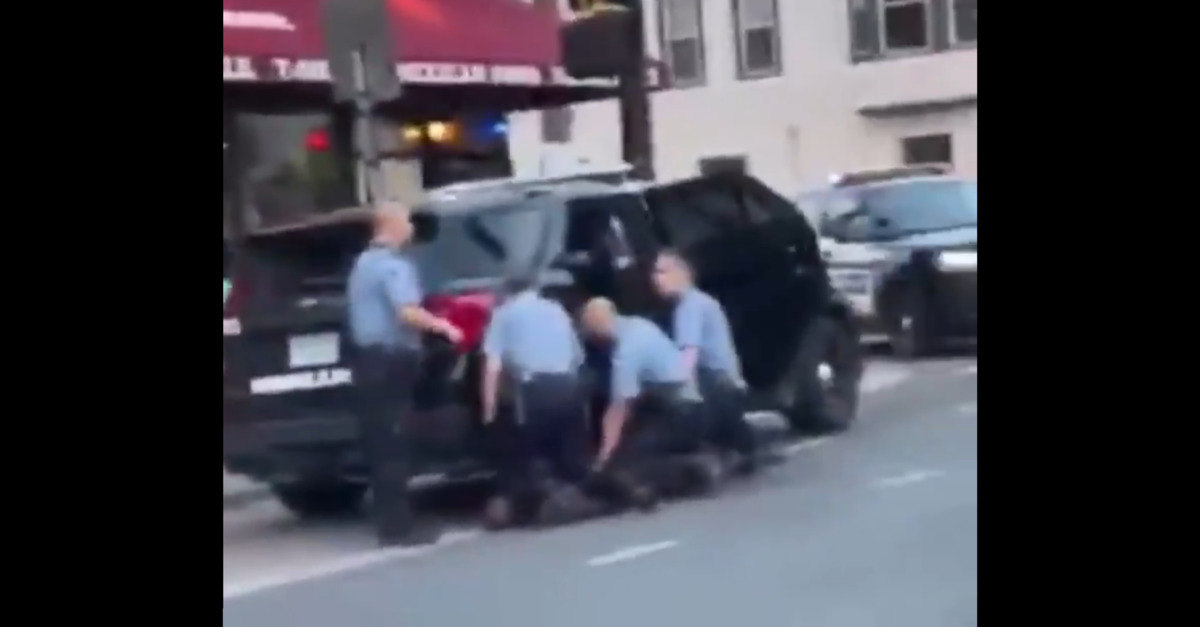 Before Minnesota Attorney General Keith Ellison (DFL) was set to speak on Wednesday, it was revealed by Sen. Amy Klobuchar (D-Minn.) that prosecutors would bring additional charges against the three previously uncharged officers who were on the scene as George Floyd was allegedly murdered on camera by ex-cop Derek Chauvin on May 25.

The Star Tribune reported ahead of the press conference that there would be said charges, including the upgrading of charges against Chauvin. Chauvin was initially charged with murder in the third degree and manslaughter in the second degree, but Klobuchar said that Chauvin would now face a second-degree murder charge. It was also reported that the other officers would face charges of aiding and abetting murder.

Eliison used the press conference to justify the charges and push for a revamp of policing across the country.

“The charges did fit the facts in this case,” Ellison said. “We’re going to pursue them.”

“We need new policy and legislation and ways of thinking at the municipal, state and federal levels,” he added. “There is a role for all who dream of a justice we haven’t yet experienced.”

The decision to charge the three additional officers has been predicted in recent days.

“We heard that they expect to charge those officers,” Floyd family attorney Benjamin Crump said on the Today show Tuesday morning. “And now with the autopsy, the independent autopsy from the family that pays particular attention to the two knees at the back compressing his lungs, which is equally important as the neck compression cutting off the flow of air.”

“They will be charged, we understand,” Crump continued. “That is what the families are hearing from the authorities.” On Wednesday afternoon, Crump related the Floyd family’s reaction to the news.

FAMILY’S REACTION: This is a bittersweet moment. We are deeply gratified that @AGEllison took decisive action, arresting & charging ALL the officers involved in #GeorgeFloyd's death & upgrading the charge against Derek Chauvin to felony second-degree murder. #JusticeForGeorge pic.twitter.com/jTfXFHpsYl

“This is a bittersweet moment. We are deeply gratified that @AGEllison took decisive action, arresting & charging ALL the officers involved in #GeorgeFloyd’s death & upgrading the charge against Derek Chauvin to felony second-degree murder. #JusticeForGeorge,” Crump’s tweet on behalf of the family said.

In a video that has been viewed by millions of people around the world, Chauvin can be seen sharply pressing his knee into the back of Floyd’s neck for several minutes before he loses consciousness. Floyd repeatedly cries out: “I can’t breathe” and pleads for his “mama” to no avail.

Since-fired officer Tou Thao is also seen in the video–standing and watching while Floyd lost consciousness and his life.

Later footage and photographs of the incident revealed that now-former officers J. Alexander Kueng and Thomas Lane were also involved in restraining Floyd prior to his death. Many critics believe that Kueng and Lane, at least, should also bear some legal culpability for their actions.

Under Minnesota state law, murder in the third degree, as previously alleged against Chauvin, occurs when someone “without intent to effect the death of any person, causes the death of another by perpetrating an act eminently dangerous to others and evincing a depraved mind, without regard for human life.”

Essentially, prosecutors in Hennepin County at first treated Chauvin’s treatment of Floyd as an unintentional killing that nonetheless should have been foreseen because the act of pressing his knee into Floyd’s neck for so long–as Floyd pleaded for the ability to breathe and for his mother–amounted to “an act eminently dangerous to others and evincing a depraved mind, without regard for human life,” according to the original charging documents which mirror the state’s third-degree murder statute.

A second-degree murder conviction in Minnesota carries a maximum penalty of 40 years in prison, which would substantially increase the likelihood that each officer involved in Floyd’s death will spend many years behind bars upon conviction.

Under the state’s aiding and abetting statute, also known as accomplice liability, a “person is criminally liable for a crime committed by another if the person intentionally aids, advises, hires, counsels, or conspires with or otherwise procures the other to commit the crime.”

Chauvin’s amended criminal complaint notes that the former police officer has been charged with second degree murder under the theory that Floyd’s death was still unintentional but occurred during the course of committing a separate felony–assault in the third degree.

[O]n or about May 25, 2020, in Hennepin County, Minnesota, Derek Michael Chauvin, caused the death of a human being, George Floyd, without intent to effect the death of any person, while committing or attempting to commit a felony offense other than criminal sexual conduct in the first or second degree with force or violence or a drive-by shooting, namely assault in the third degree.

Whoever does either of the following is guilty of unintentional murder in the second degree and may be sentenced to imprisonment for not more than 40 years: (1) causes the death of a human being, without intent to effect the death of any person, while committing or attempting to commit a felony offense other than criminal sexual conduct in the first or second degree with force or violence or a drive-by shooting.

The upgraded charge of Murder 2 is under the theory that the defendant,#DerekChauvin caused the death of #GeorgeFloyd without intent to cause the death while committing a felony, namely Assault. It’s similar to New York’s felony murder and easier to prove than intentional murder https://t.co/W7FM2OTUrY

Charging all four officers involved in Floyd’s death has been a goal of #BlackLivesMatter protestors in Minneapolis and across the country.

Those specific and localized demands for accountability in Minnesota have given way to a broader protests against systemic racism in American policing. Many of those protests have been met with hundreds of filmed incidents of police brutality. Many protests have given way to widespread looting and even attempted fatal reprisal violence against police as well as myriad allegations of property destruction committed by both protestors and police alike.

“The demonstrations and the protests are dramatic and necessary,” Ellison said during the press conference. “But building just institutions is more of a slow grind and necessary as well.”