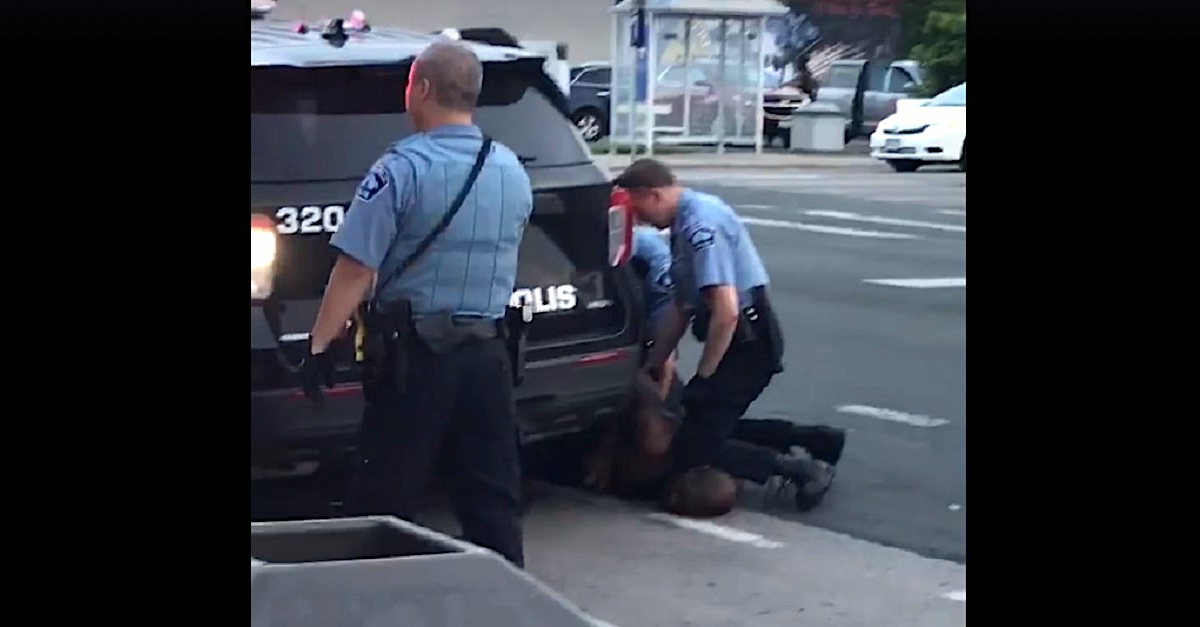 All four of the former Minneapolis police officers accused of murdering or playing a role in the murder of George Floyd have agreed to allow their court proceedings to be televised. That’s according to a document filed in court Friday morning which accuses a series of high-ranking government officials of destroying the officers’ rights to a fair trial by leaking information to the press and attempting to “geld the Constitution.”

The decision, which the defendants say will “let a cleansing light shine on the[] proceedings,” clears a significant procedural hurdle to public access in the closely watched cases against Derek Chauvin, Tou Thao, Thomas Kiernan Lane, and J. Alexander Kueng.  However, the state has yet to grant similar consent.

According to the document filed in the case against J. Alexander Kueng:

Counsel has consulted with the attorneys for each defendant and informs this Court that all Defendants are requesting and consenting to video and audio coverage of pre-trial and trial proceedings regardless of any objection from the State of Minnesota. The State of Minnesota has been consulted, but has yet to take a position. The Defendants argue that this relief is necessary to provide the Defendants with a fair trial in light of the State’s and other governmental actors multiple inappropriate public comments and to assure on open hearing in light of the ongoing pandemic.

Minnesota in recent years decided to allow news organizations to record criminal trials only with the consent of all parties in a matter.  Rule 4.02(d) of the Minnesota General Rules of Practice states:

In criminal proceedings occurring before a guilty plea has been accepted or a guilty verdict has been returned, a judge may authorize, with the consent of all parties in writing or made on the record prior to the commencement of the trial, the visual or audio recording and reproduction of appropriate court proceedings.

The rule contains standard exceptions, such as a ban on showing members of a jury, but also contains a rarer ban on audiovisual coverage of “any witness who objects thereto in writing or on the record before testifying.”  In other words, even if the trial as a whole is televised, coverage may be blacked out for some witnesses.

It is rare for all parties to consent to cameras in court, but usually it is defendants, not prosecutors, who object to coverage.

Some states allow cameras in court if only one party agrees that cameras should be allowed.  Other states ban cameras completely.

Though the Minnesota rule requires consent from all parties for trials to be televised, the defendants in the George Floyd cases argue that the rule requiring prosecutors to consent should be deemed invalid as a matter of constitutional fairness.  As part of that argument, the defendants raised complaints about “unethical leaks” from officials, including the governor, the mayor, and the police chief, who the defendants say have sullied their rights to a fair trial:

The Defendants ask this Court to allow video and audio coverage of all proceedings regardless of the lack of consent from the various agencies prosecuting these matters. The Defendants argue that, in response to unethical “leaks” of information and many prejudicial comments from the Governor, Attorney General, Hennepin County Attorney, Mayor of City of Minneapolis, Commissioner of Public Safety and now the Minneapolis Chief of Police, video and audio coverage is necessary to promote the possibility of a fair trial. The Sixth Amendment grants criminal defendants the right to a speedy and public trial by an impartial jury. Under the impartial jury requirement, jurors must be unbiased. Failure to allow real time video coverage of these proceedings will deprive the Defendants of a fair and open trial, a right assured under the Minnesota and United States’ Constitutions. Specifically, this relief is necessary to blunt the effects of the increasing and repeated media attacks from the various officials who have breached their duty to the community. These State comments have crescendoed to an extraordinary volume this week with the Chief pronouncing that “[w]hat happened to Mr. Floyd was murder.” The State’s conduct has made a fair and unbiased trial extremely unlikely and the Defendants seek video and audio coverage to let a cleansing light shine on these proceedings. Doing otherwise allows these public officials to geld the Constitution.

The Law&Crime Network is among a series of news organizations which have applied to cover the proceedings against all four officers.

READ the document below.

J Alexander Kueng Cameras in Court by Law&Crime on Scribd

EDITOR’S NOTE:  Later Friday, after this report was published, a judge denied requests to broadcast hearings in the cases against the officers because prosecutors objected.  The judge did not rule on whether cameras would be allowed during the actual trials.