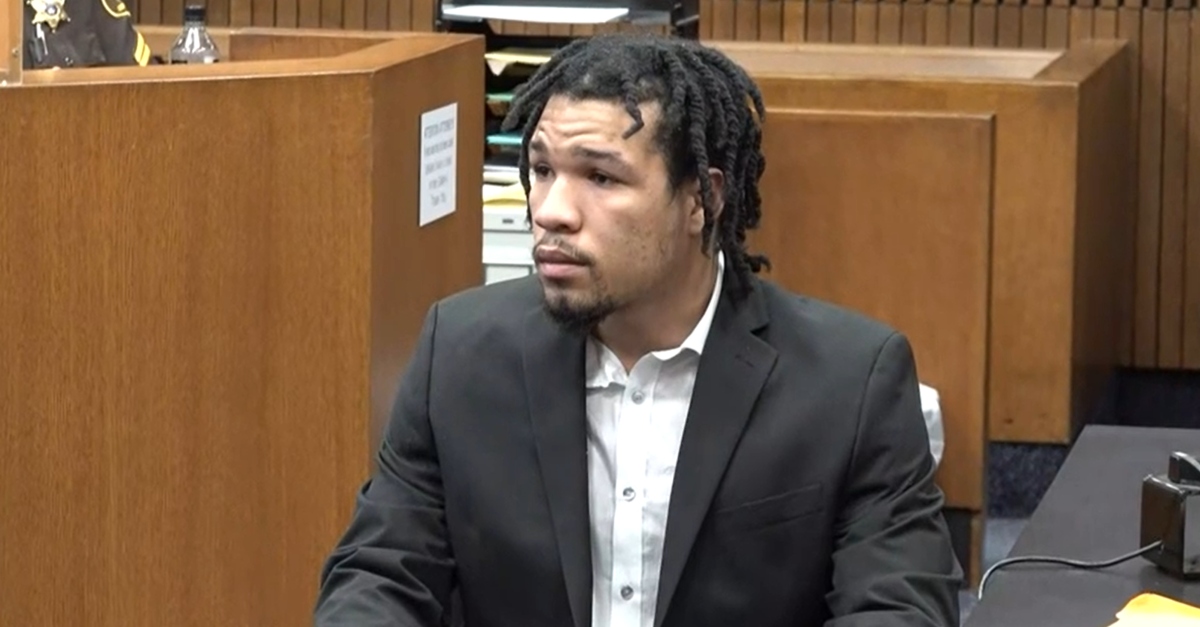 Devon Robinson, 19, was convicted on Tuesday in the May 25, 2019 murders of  Timothy Blancher, 20, Alunte Davis, 21, and Paris Cameron, 20. The prosecution said that the defendant went to a party with the victims, participated in sex acts, and returned hours later to kill everyone who knew about it.

Blancher and Davis were gay men, and Cameron was a transgender woman. That played a key role in the motive proffered by the state. Special prosecutor Jaimie Powell Horowitz told jurors at closing arguments that Robinson committed the murders to cover up what happened at the party. The defendant didn’t want his family to find out, she said. Horowitz said that this wasn’t just a case about hate, but “self-hate.”

#DevonRobinson also GUILTY of Assault with Intent to Murder Clifton Keys and Armon Matthews. Guilty of all remaining counts of Use of a Firearm in Connection with a Felony. 10 counts in total. pic.twitter.com/QrlUeqDSNG

If there’s any thing both sides of the case agree on, it’s that Robinson went to a wild party with the victims.

They’d met at a gas station, where Cameron hit on the defendant, the state said. As demonstrated in surveillance footage, Robinson was indecisive about whether he’d go the party, Horowitz asserted. The defendant, who lived two blocks from the murder scene, was seen pacing, authorities said. He eventually went. Horowitz said this wasn’t “a routine hook-up.” Multiple people performed oral sex on the defendant, the prosecutor said.

According to the state’s account, people went up and down the stairs, saying Robinson was gay. The defendant left, went to the gas station, and was seen dry heaving and spiting, said the prosecution. He went back to his home at 4:03 a.m. The murders happened less than an hour later. A masked gunman stormed the home, and began shooting, the prosecution said. Davis was shot twice. Blancher, and Cameron were struck four times.

Horowitz asserted that that Robinson committed the deed to get rid of people who saw the sex acts. The defendant worried about what his family might think if they found out, and he was concerned that the people in the party were likely to talk about it, said the state.

The defense hinged on whether Robinson could be tied to the murders. After all, the gunman was masked. A witness suggested that the shooter was Robinson, but the defense tried to show that this wasn’t a positive identification.

“Who is the person in black?” said attorney Evan Callanan Jr. at closing arguments.

He asserted that the prosecution wanted jurors to infer everything here. The state didn’t have the murder weapon, and they didn’t have fingerprints tying Robinson to the murder itself. There was no witness testimony of the defendant confessing to the act, said the defense.

“Don’t give into a hunch,” Callanan said.

Like Horowitz, he described the night’s events as a wild party. He called it “over the top.” The attorney said his client was a willing participant in the night’s events, however, and that Robinson didn’t have a “reason in the world” to shoot three people.

But he did have a reason, and his actions after the shooting indicated guilt, according to the prosecution. Robinson fled his home the morning after, never to return, Horowitz said. He was found a week and a half later because of an anonymous tip, said the state. The prosecution accused the defendant’s mother of helping hide him.

During questioning on June 5, Robinson didn’t admit to anything he didn’t have to, said the prosecution. He acknowledged he was on the news, but told cops he didn’t know why he was there speaking to them, the state said. He only admitted to sexual contact with Cameron after he learned that gas station surveillance showed them together. He admitted this because he knew that he ejaculated with Paris, Horowitz said. Because he knew his DNA was there, he acknowledged that he was at the murder scene earlier in that night, said the prosecution. But he wasn’t going to admit to sexual contact with anyone beside Paris, according to this argument.

Horowitz dismissed the defense’s attempts to undermine evidence that tied Robinson to the shooting itself. There was no evidence of anyone else going to back to the party and committing the murders. She argued that all evidence pointed to the defendant.

“You don’t get to put on a mask, and get away with mass murder,” Horowitz said.