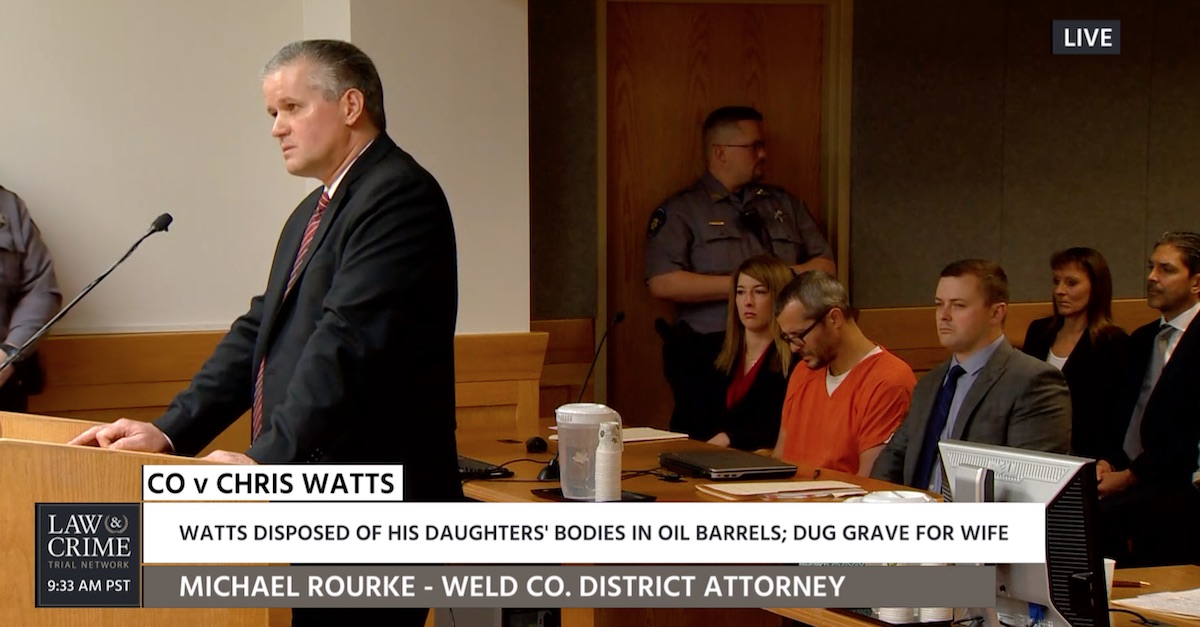 Weld County DA Michael Rourke revealed the shocking evidence the prosecution obtained when it comes to the brutal and unconscionable murders perpetrated by Christopher Watts against his wife Shanann, unborn son Nico, and young daughters Bella, 4, and Celeste, 3.

Rourke said that Watts “coldly and deliberately ended four lives,” not in a fit of rage, but in a “calculating manner.” He said that the discussion surrounding an “emotional conversation” between Christopher Watts and his wife Shanann that preceded her murder and the murder of her children is still only known to him.

What we do know, Rourke said, is that Watts strangled Shanann to death with his own hands and “slowly took her life.”

“It was not done in an uncontrolled vengeful manner,” he said. Watts initially claimed that he strangled his wife because she killed the kids. The prosecution said that everything that happened after the killings indicated otherwise.

“The man she loved choked the life out of her,” Rourke said. “What must Bella, age 4, and Celeste, age 3, thought as their father, the one man on this earth who was supposed to protect them […] snuffed out their lives?”

He said the girls both died from smothering.

“The man seated to my right smothered his daughters,” Rourke said. “Bella fought back for her life.”

“She bit her tongue multiple times before she died,” he said. Rourke said that the autopsy did not show that Celeste had similar signs of external injury, but “Celeste was smothered nonetheless.”

Then Watts “calmly and methodically loaded their bodies into his work truck,” Rourke said. “In one final sign of callousness he drove them to a location where he thought no one would ever find them.”

“He ensured that they would not be together, even in death,” disposing of their bodies in separate locations.

“Bella and Celeste were thrown away,” Rourke said, adding that Bella was shoved through an 8-inch hatch at the top of the oil tank she was dumped in. He said Bella had scratches on her buttocks from being shoved through that hatch.

The prosecution said that said that Watts’ motive was simple.

“He had a desire for a fresh start,” with his mistress. The prosecution said Watts searched for secluded vacation spots, researched jewelry, and texted the woman at all hours.

They said that even the morning after he killed his family, he made several phone calls. One of them was Watts chillingly telling their school that the girls were being unenrolled. He contacted a realtor to discuss selling of his house and he texted his girlfriend about their future.

“You don’t annihilate your family and throw them away like garbage,” Rourke said. “Get a divorce!”

Rourke said that Shanann Watts’ family, the Rzucek family, was much more merciful to Christopher Watts than he was to his wife, daughters and unborn son. They were the ones who were opposed to the death penalty, not the prosecution.

At the end of that lengthy statement from Rourke, Christopher Watts’ attorney said that Watts was “sincerely sorry for all of this,” and “understands that words are hollow at this point.”

The judge called this a “senseless crime” and a “vicious” crime.

“The despicable act of disposing of the bodies in the manner in which they were done in this case,” he said. “I could objectively say that this is the perhaps the most inhumane and vicious crime that I have handled out of the thousands of cases that I have seen.”

“Nothing less than a maximum sentence would be appropriate,” he said. With that, he sentenced Watts to life in prison without parole.